Comedian Jon Benjamin has a van...and a voice 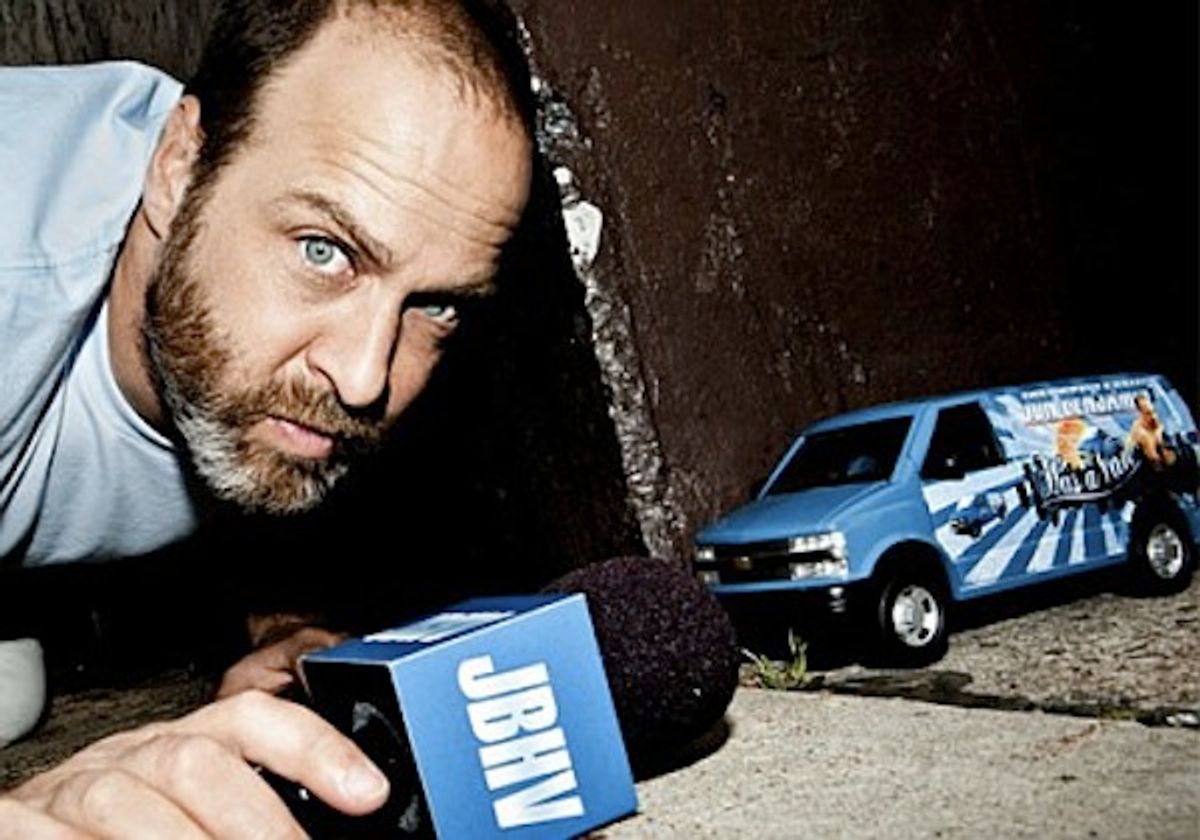 You might not know who Jon Benjamin was if he bumped into you on the street, but as soon as he opens his mouth, he's instantly recognizable. He's on "Family Guy" as Carl the convenience store clerk, Ben Katz from Comedy Central's "Dr. Katz," Coach McGuirk from "Home Movies," and Bob from Fox's new series "Bob's Burgers." But the comedian is now showing his face on "Jon Benjamin has a Van," a faux-news show that recently premiered on Comedy Central.

I spoke to Ben over the phone about the jet-setting lifestyle of one of TV's most famous voices -- and why he won't record your outgoing voicemail.

So, the obvious question: Why a live show now?

Drew, there are tons of live shows on television ... Oh why a live show about me?

Because you do know that most of the television you watch is live-action.

The major networks, generally. But for you, personally, you've done so much voice work.

Well I've been a massive failure for years and years, so it's hard to get a live show on the air, apparently. I've tried, a bunch of times. But no, they … um, didn't like me. But it wasn't for lack of trying. I wasn't suddenly like "Time to pitch a show!"

I remember an old SuicideGirl interview you did a long time ago, where they said you turned down more roles than any other actor.

(Laughs) Where did they get a statistic like that?

Oh, those IMDB facts don't mean anything, they aren't real. Do they take the mean average?

I'm guessing so. Like one year you might turn down less roles than Daniel Day-Lewis, but it evens out.

It is absolutely between me and Daniel Day-Lewis for the record, and he's up by three right now because he just turned down "Two and a Half Men."

Well, I turned down the Jon Cryer part. They were going to replace both of them and have me and Daniel.

Who was going to play the kid?

Seth Green. We should just do a live show of that. So no: I've heard that quote before, about turning down the roles, and I think it's just silly.

You have taken small roles in movies. You were a doctor in "Not Another Teen Movie" for three seconds, and Miranda's co-worker who thought she was a lesbian on "Sex And the City." But it's your voice that's well, really made you famous. I had a boyfriend in college who actually wanted to grow up to be Ben Katz from Dr. Katz.

It's such an easy goal to succeed.

Was that your first role?

It was my first job, I think.

And then "Home Movies," spots of "Venture Brothers" and "Aqua Teen," and now "Archer" and "Bob's Burgers." After decades of doing voice work, it does seem like you prefer to work in that medium.

It's true. There are times I've turned down sitcoms and other opportunities. I don't know whether that was a bad or good idea, ultimately. But there were far more times where I've been rejected. So it's not like I say "no" to work so much … actually I've never said "no" because I just have a guy that says "no" for me.

Well there is this sense that now with "Archer" and "Jon Benjamin has a Van," you've become more recognizable, maybe more mainstream even? Do you think those cult Jon Benjamin fans are going to see this as you getting too recognizable? Selling out?

Ha. Yeah. "I remember when he was cool."

Or, "He was better as that talking can from 'Wet Hot American Summer.'"

Funny thing. I never saw that scene in the movie when it came out. But I mean, I know I'm in it. Back to the point: I'm not concerned about "selling out" because I have to make a living, but I am slightly concerned with people watching ["Jon Benjamin has a Van"] and not enjoying the cartoons as much.

Really? Like people will have a harder time associating you with "Archer" after this?

Yeah, but that might just be a weird. That might not be true. Everyone knows who Homer Simpson is.

Oh yeah, you should see the two of us walking around together.

That sounds like the best day in Hollywood ever. I remember back when you were making web videos for (Huffington Post's now defunct comedy website) 23/6, you were doing segments that weren't just live-action, but were in the same satiric news format as your new show.  Were these ideas you've had kicking around?

It's probably more the comedy I gravitate towards. Boring. Dry. Occasionally funny. So yeah, it's a good medium for me. After 23/6 I did a pilot for Vice where I had like a cable access show where we did a bunch of fake interviews that were supposed to take place in the 80s. So I had been doing stuff in that vein. "Midnight Pajama Jam" was a live show I did where the main thrust of it was a talk show, a segment with a guest. It was our way of getting comedy out there.

A lot of articles talk about the dual-format of "Jon Benjamin": Half of it is on the street interviews with real people, and the other half are these scripted fake segments that are also interviews. I'm trying to imagine your pitch meeting for the show.

I showed them "Midnight Pajama Jam," actually. Some street pieces I did where I'd go out and talk to people in the city, or one where my friend was a sock puppet and we talked to people. And some of it ended up on the show, like the "Do You Have a Minute" segment.

My favorite thing from "Midnight Pajama Jam" was the Hello Squad. Can you tell this is becoming less an interview and more me telling you what stuff you've done?

I actually feel like I'm on a job interview for your company. "So 'Midnight Pajama Jam'…help us remember…what was that?"

So Jon: What are your biggest strengths and weaknesses you think you can bring to this company? And then we'll go over employee stock options.

Good to know, because…

Well now the voice acting is making a little more sense. Do they have to shoot you from the waist up on the show?

Like when you took the form of a stallion as Master in "Venture Brothers?"

Good job bringing it back to my credits.

I'm about to do it again: So you're doing "Bob's Burger's" on Fox, "Archer" is getting a third season, and you're now starring in your own Comedy Central show. That schedule must be interesting.

Well I have plenty of time on my hands, ironically. I'm done shooting "Van," and voice work … it's not like you have to go to an office every day and do "Bob's Burger's."

You get off easier than the writers.

Well, "Archer" is written by one guy, which is pretty crazy. Sometimes when we record, he's not there because he's holed up writing the next episode.

That show is a revelation.

Without a doubt, I love "Archer." I like me in it, obviously, I am very good. But the whole thing, it's very awkward, but I'll literally watch the show and forget I'm in it. And not like "I'm so good, I'm losing myself watching my own character." The show is just that good.

With your distinct voice, how many people ask you to record their outgoing voice messages?

Oh yeah, I summarily refuse to do those. I used to do that all the time. But then I had a breakthrough where I was like "Fuck off."

I will say that to anyone. "Fuck off." I will leave you a message that says "I don't want to be doing this right now." I mean, I won't actually say that … it's just always so awkward, and the guy always has to set it up on his phone while I just stand there. "Oh, Jenny is going to love this, hold on man, let me just find her number." Come on already, can I go?

No … I was saying that in character.

I know, and I was responding in the character of the guy who wants you on his outgoing voicemail. It must be odd to have a fan base of people just obsessed with your voice.

You should start a service, "Jon Benjamin will talk to you." And you can charge money.

(Click below to hear Jon's special message to Salon's readers -- ie. the outgoing message he recorded on my voicemail)