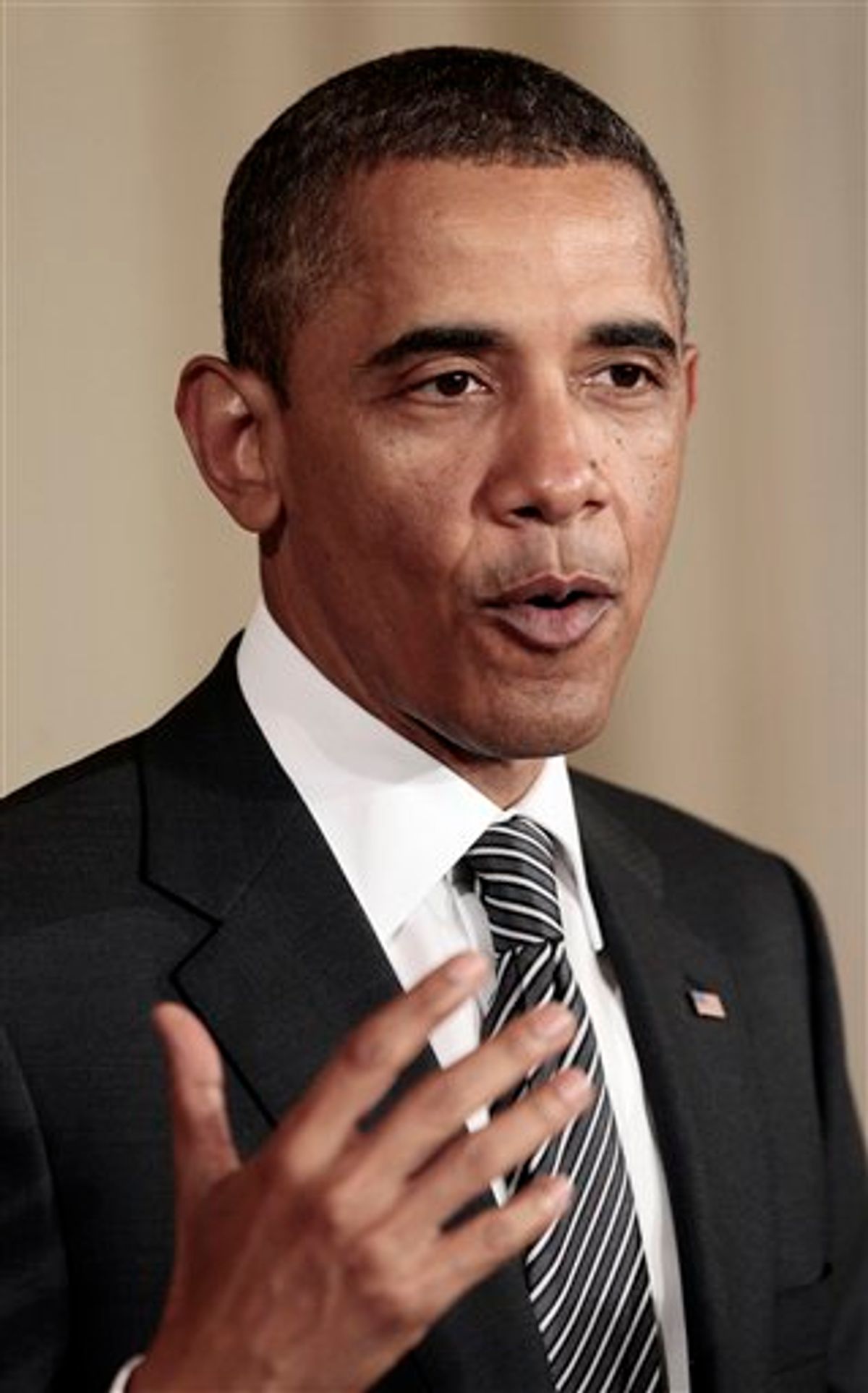 FILE - In this June 27, 2011 file photo, President Barack Obama speaks at the White House in Washington. Call him the Digital Candidate: President Barack Obama has asked supporters to use Facebook to declare Im in for his re-election campaign and has begun using Twitter to communicate with his nearly 9 million followers. If Obama broke new ground using email, text messages and the Web to reach voters in 2008, Obama version 2.0 aims to harness the expansive roles that the Internet and social media are playing now in voters lives. (AP Photo/Pablo Martinez Monsivais, File) (AP)
--

Those attempting to defend President Obama's claimed legal power to involve the military in the Libya War without Congressional approval have numerous problems; none is more significant than candidate Obama's own clear statement to the Boston Globe's Charlie Savage in late 2007 on this matter.  In response to being asked whether "the president ha[s] constitutional authority to bomb Iran without seeking a use-of-force authorization from Congress" -- "specifically . . . the strategic bombing of suspected nuclear sites" -- Obama replied: "the President does not have power under the Constitution to unilaterally authorize a military attack in a situation that does not involve stopping an actual or imminent threat to the nation." Note that Obama wasn't being asked whether the President has unilateral authority to order a ground invasion or a full-scale war, but merely the limited, "strategic bombing" of Iran's nuclear sites, and he replied decisively in the negative by invoking a very clear restriction on presidential authority to order military action without Congress.

Yesterday, State Department adviser Harold Koh testified before the Senate Foreign Relations Committee regarding the war in Libya.  The Committee had also requested the appearance of top lawyers from the Justice and Defense Departments -- who, contrary to Koh, told the President that he was violating the War Powers Resolution by waging war without Congressional approval -- but the Most Transparent Administration Ever refused to produce them, instead sending only the State Department lawyer who told the President what he wanted to hear: that he did indeed have this unilateral power.  Koh was confronted with candidate Obama's 2007 statement that directly contradicts the White House's current position, and Koh did the only thing he could do: insist that the Constitutional Scholar's view back then were "not legally correct" and was "too limited a statement," and that he'd be "very surprised if that's [Obama's] position" today.  Watch the amazing, cringe-inducing one-minute video:

In other words, said the President's designated legal spokesman, what Obama the Candidate said on this crucial issue when trying to persuade Democrats to nominate him was wrong and is now officially repudiated.  Let's be clear about how significant --- and typical -- this is.

Obama's late 20o7 statements about executive power were not some off-the-cuff remarks about an ancillary issue.  Rather, they were part of a statement he prepared in which he cited numerous key legal advisers (Cass Sunstein, Greg Craig, Laurence Tribe, and Jeh Johnson [now the DoD General Counsel who told him he must comply with the WPR]).  More importantly, the questionnaire he was answering was exclusively about executive power: one of the central concerns for Democratic voters in the Bush era.  In the questionnaire, Obama himself explained why these issues -- and his answers -- were so vital:

These are essential questions that all the candidates should answer.  Any President takes an oath to, “preserve, protect and defend the Constitution of the United States."  The American people need to know where we stand on these issues before they entrust us with this responsibility -- particularly at a time when our laws, our traditions, and our Constitution have been repeatedly challenged by this Administration.

Obama himself urged voters to pay attention to the candidates' answers on executive power and to rely on them before deciding whom to "entrust" with the responsibility of the awesome powers of the Oval Office.  I certainly agreed with Obama back then.

Two days after the questionnaires were published in The Boston Globe, I cited what I called Savage's "superb piece of journalism" in extracting these answers, and harshly criticized Mitt Romney for the answers he gave, writing: "The powers [Romney] claims the President possesses are definitively -- literally -- tyrannical, unrecognizable in the pre-2001 American system of government and, in some meaningful ways, even beyond what the Bush/Cheney cadre of authoritarian legal theorists have claimed." Others, including then-Georgetown Law Professor and soon-to-be Obama OLC official Marty Lederman pointed out the same thing ("Romney? Let's put it this way: If you've liked Dick Cheney and David Addington, you're gonna love Mitt Romney"), and by way of contrast, specifically cited Obama's answer on the President's limited war-making powers.  What was the answer given to the question about the President's war-making powers by the Big, Bad, Scary, Tyrannical, Cheney-replicating Romney?  This:

A President must always act in the best interests of the United States to protect us against a potential threat, including a nuclear Iran. Naturally, it is always preferable to seek agreement of all -- leadership of our government as well as our friends around the world -- where those circumstances are available.

In other words, said Romney, it'd be nice if Congress endorsed the President's will to war, but it's hardly necessary: quite similar to Obama's effective position on Libya today (Romney, of course, supported Obama's decision to go to war in Libya).

In his lead article introducing the questionnaires, Savage himself explained why the candidates' answers on these questions were so important:

In 2000, George W. Bush and Dick Cheney were not asked about presidential power, and they volunteered nothing about their attitude toward the issue to voters. Yet once in office, they immediately began seeking out ways to concentrate more unchecked power in the White House -- not just for themselves, but also for their successors. . . .

Legal specialists say decisions by the next president -- either to keep using the expanded powers Bush and Cheney developed, or to abandon their legal and political precedents -- will help determine whether a stronger presidency becomes permanent.

"The sleeper issue in this campaign involves the proper scope of executive power," said Richard Epstein, a University of Chicago law professor.

That second paragraph proved to be prescient indeed.  That's why many of us who were focused on these issues paid such close attention to the answers the candidates gave to Savage.  To watch the administration so casually renounce one of the key answers -- with a yawn and with almost no explanation -- is repellent.  But this is, of course, not the only time when Obama lured people to support him based on positions he quickly repudiated and vows he casually violated.  After all, that Boston Globe questionnaire was submitted less than two months after Obama categorically vowed to filibuster "any" bill containing telecom immunity, producing headlines like this one that excited many Democratic primary voters:

Once he had the Democratic nomination safely in hand, Obama almost immediately violated that vow, voting against the filibuster of a bill containing retroactive immunity, and then voting in favor of the bill itself.  Prior to that vote, Talk Left's Armando wrote: "If Obama does not filibuster telecom immunity, it proves his commitments can not be trusted. That he will say and do anything to win, even if he does not mean it."  In light of this latest episode -- forget what I said about war powers when campaigning -- is there any doubt he was right?  If there is any such doubt, re-read this first paragraph from Jack Goldsmith's May, 2009 New Republic article explaining that Obama was doing more to entrench Bush/Cheney Terrorism and civil liberties policies than the right-wing ideologues who pioneered them ever could have dreamed of achieving -- the very policies Obama relentlessly denounced when campaigning.

In this regard, Harold Koh has become the perfect and pure face of the Obama presidency.  How strange to suddenly learn that Koh viewed Obama's 2007 position on presidential war powers to be "not legally correct" and "too limited."  Prior to joining the Obama administration, Koh was a very prolific scholar at Yale Law School who spoke extensively on executive power and war; why -- until now that it's necessary to justify Obama's war -- did Koh never once mention that Obama's position on such a vital issue was wrong?  In his weekly column, Gene Healy provides the answer:

Considering Koh's background, the whole episode offers a cautionary tale about the corrupting effects of power.

Harvard's Jack Goldsmith notes that "for a quarter century before heading up State-Legal, Koh was the leading and most vocal academic critic of presidential unilateralism in war." On the strength of that reputation, Koh rose to the deanship of Yale Law School in 2004.

And Koh seemed to take the War Powers Resolution pretty seriously. In 1994, for example, he wrote to the Clinton Justice Department to protest the planned deployment to Haiti, which was carried out without a single shot being fired:

"Nothing in the War Powers Resolution authorizes the President to commit armed forces overseas into actual or imminent hostilities in a situation where he could have gotten advance authorization."

Yet the implications of Koh's position today are that the president can rain down destruction via cruise missiles and robot death kites anywhere in the world, and unless an American soldier might get hurt, neither the Constitution nor the War Powers Resolution are offended. . . .

Koh was in his mid-50s when he joined the administration, coming off a distinguished career built on opposition to the Imperial Presidency. Yet the lure of being "in the room" when the big decisions are made seems to have turned him into the Gollum of Foggy Bottom.

It's the kind of story you hear again and again in D.C. -- on the right and the left -- of principles sold out for the dubious rewards of "access" and "relevance." This town is "Hollywood for the Ugly" in more ways than one.

Given that, it's easy to see how Koh has risen from token liberal placed in an inconsequential "advisory" position at State to the face of the Obama administration and prime Presidential spokesman. As Barack Obama himself has repeatedly shown, and as his underling Koh has dutifully learned, one does not advance in Washington power circles by adherence to any sort of principle or actual conviction.  One accumulates power by saying anything and everything necessary to acquire and hold onto it: one key reason I now all but disregard what Obama says, and watch only what he does.