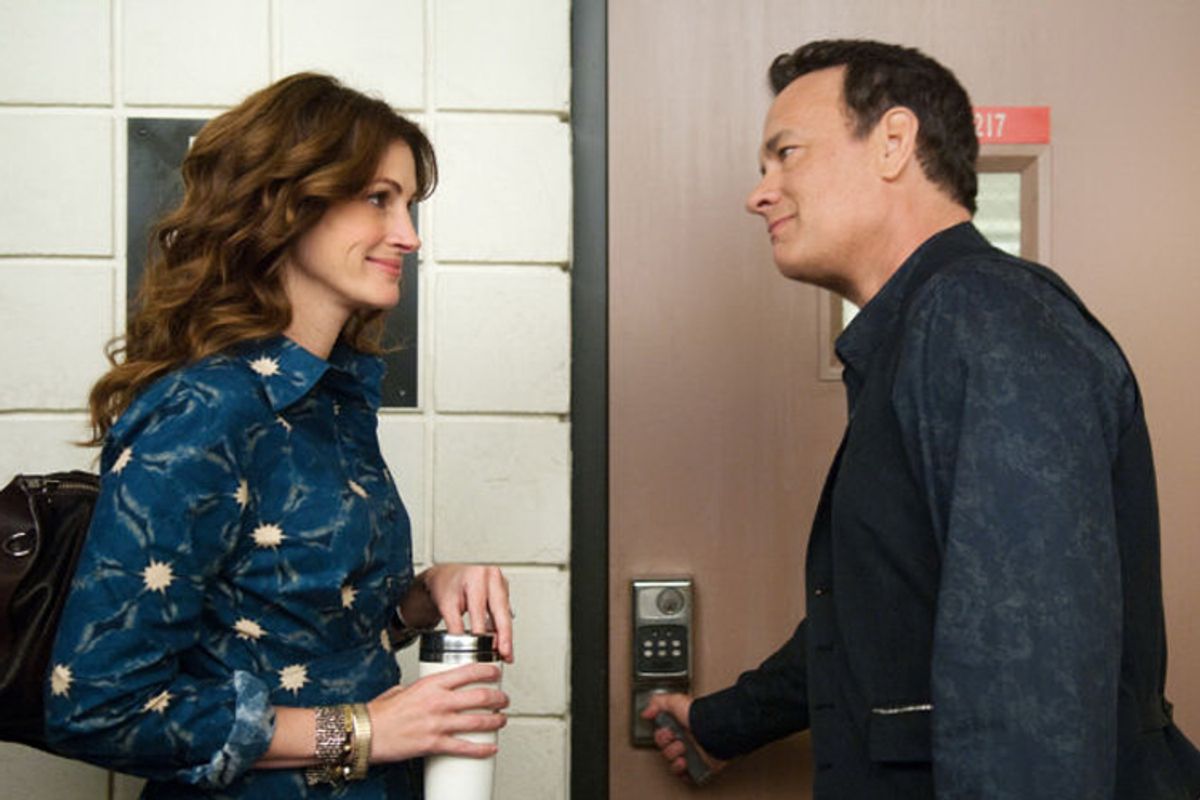 Tom Hanks' cheerful recession-themed romantic comedy "Larry Crowne" doesn't have a whole lot going on, which I guess makes it the perfect grown-up-aimed counterprogramming to Michael Bay's "Transformers: Dark of the Moon," which has way too much of everything (not counting significance and coherence). This lightweight star vehicle for Hanks and Julia Roberts, which was co-written by Hanks and "My Big Fat Greek Wedding" creator Nia Vardalos, has no sex, no nudity, no violence, and no more than the precise number of curse words that still allows you to get a PG-13. This is the level of realism we're dealing with here: Roberts' no-good movie husband (Bryan Cranston of "Breaking Bad," who is suddenly everywhere) is supposed to be addicted to big-boobs Internet porn, but when we get a look at it, it seems to be pictures of women in bathing suits. She shouldn't dump him because he's a perv; she should dump him because he spends all his time online and can't find anything dirtier than Sports Illustrated.

Honestly, though, I'm not quite saying that the unabashed squareness and silliness of "Larry Crowne" are negatives. They're almost admirable in themselves, and certainly constitute a selling point. That PG-13 rating, for instance, isn't aimed at actual teenagers, who are not likely to be caught dead within 100 yards of this film. It's a reassuring gesture to potential customers who yearn for the tamer Hollywood romances of yesteryear. To be specific, it's aimed at my mother-in-law, who's always forlornly asking me if I've seen anything she might like. Here it is, Mama J!

Creating summer movies that can be enjoyed by large and diverse groups of viewers is an honorable and useful Hollywood tradition. It's nice to see Vardalos and Hanks trying to adapt the screwball formula of the 1930s and thereabouts to a contemporary setting, and there's a wisp of a generous and interesting idea here: If the Great Depression produced a certain variety of comic escape, maybe its 21st-century reboot will also. At this point in their careers, Hanks and Roberts know a lot about how to make movies and how to reach audiences; these are relaxed and professional star performance, long on charm and short on theatrics.

Hanks' eponymous Larry is a downsized manager of a big-box store, somewhere in suburban California, who goes back to community college at some undefined age north of 40. There he takes a public-speaking class taught by the embittered, borderline-alcoholic Mercy Tainot (Roberts), which if nothing else is a tremendous character name. As portrayals of sexy middle-aged women who no longer give a damn go, Roberts' supremely over-it Mercy beats the pants off Cameron Diaz's venal fantasy shtick in "Bad Teacher." She's all about her first cup of coffee and the blender drinks after she gets home, and what happens in between is mostly withering glances at colleagues and students and an exhausted simulacrum of 40ish femininity. Even the way Mercy drops her high-heeled shoes out the car door onto the asphalt before stepping into them -- clop, pause, clop -- conveys how much she's had it. (Mercy conveys the impression that she'd sooner piss on "Eat, Pray, Love" than read it.)

Of course the arrival of the unsinkable if highly dorky Larry will reawaken Mercy's groove eventually, but let's not get ahead of ourselves. "Larry Crowne" vacillates a little uneasily between moments of realism and moments of pure silliness; that's also true to the screwball tradition, but I'm not sure Hanks has the directorial craft or subtlety to sell it. (This is only his second feature behind the camera, although he's directed several TV episodes.) Hanks plays the scene where Larry gets fired beautifully, although it isn't well written, and there's a later scene, when Larry makes a critical decision about his financial future, that has a quiet, Jimmy Stewart, stick-it-to-the-man intensity. On the other hand, the only saving grace to this movie's goofball depiction of contemporary college life is that it has no pretension to satire or social criticism and you're not expected to take it seriously. I'll try to write this with a straight face: Larry falls in with a scooter gang whose appallingly cute co-leader, Talia (the wonderfully named Afro-British actress Gugu Mbatha-Raw), takes him on as a charity case, bringing some feng shui to his apartment, getting him a haircut and convincing him to give up wearing tucked-in polo shirts. (The hipster-ish wallet-chain thing, though, Tom? Really?)

This creates the very mildest of diversions along the way to L-U-V love between Larry and Mercy, who gets to spend a fair portion of the movie angrily misperceiving the puppyish relationship between Larry and Talia. ("What do men see in irritating free spirits?") Roberts is never more enjoyable than when she's pissed off, and in fact the only scene in "Larry Crowne" that has the remotest frisson of sex appeal comes when Mercy's so angry at her boob-fetishist husband that she gets drunk, rides home on Larry's scooter and tries to drag him into her apartment. But this isn't the kind of movie where people have sex without a lot of semi-comical dithering first. Or have sex at all, come to think of it. Nothing can explain "Larry Crowne" better than the presence of George Takei, of "Star Trek" fame, as a pompous and imperious economics professor. He starts out completely embarrassing, gets a little funnier and winds up as an ingratiating figure you'll remember fondly, even though he serves absolutely no purpose.