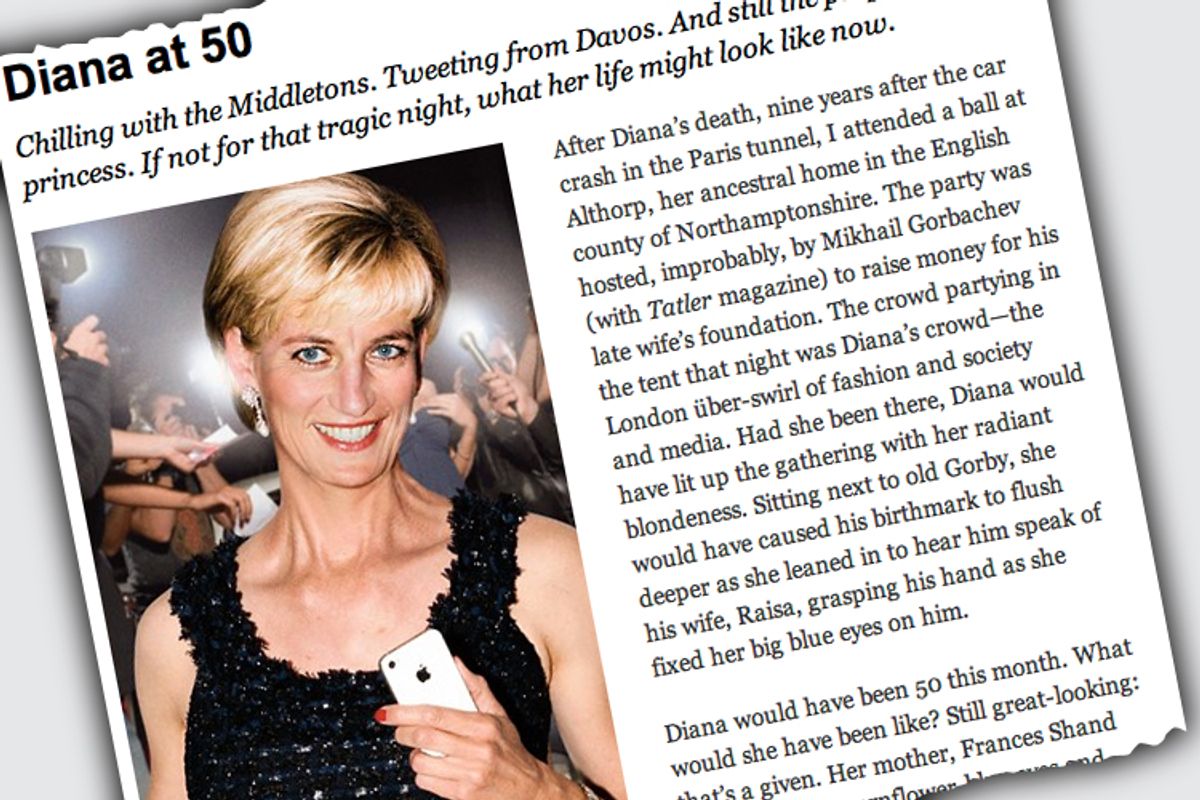 Had she lived, Princess Diana would be celebrating her 50th birthday this Friday. And in honor of the middle-aged milestone that never was, Newsweek has created an elaborate fantasy of what Kate Middleton's mother-in-law would be up to now, courtesy of Tina Brown and Photoshop. Let the fanciful exhumation commence!

The "Diana at 50" issue is, on the one hand, a heck of an attention-getting stunt for the struggling weekly, and a chance at last to show off some of that vintage Tina Brown shamelessness that's been so restrained since she took over as editor in March. On the other hand, when you're a magazine with the word "news" in your name, devoting a cover story to an elaborate piece of fanfic doesn't exactly spell "journalistic credibility." Come with Newsweek, won't you, on a journey to alterna-2011, a place where a princess emerged unscathed from a Paris tunnel in 1997, and Helen Mirren surely does not have an Academy Award. On the magazine's cover, a Diana with dark lines on her face to signify the cruel passage of time is disastrously Photoshopped next to the newlywed Duchess of Cambridge, while inside, the magazine imagines her gamely clutching an iPhone – the better to tweet from.

Brown, who wrote an exhaustive biography of Diana, certainly knows her material, and how to spin a colorful, at times even credible, yarn from it. In Brown's reinvention of history, Diana would still be lighting up the social world with "her radiant blondeness," causing Mikhail Gorbachev's "birthmark to flush deeper" as she fixes her "big blue eyes on him." She'd be keeping herself up with Botox and the gym – a likely scenario for an iconic beauty. She'd have become an even more powerful force for the charitable causes she supported – "the victims of land mines, leprosy, and HIV/AIDS." Would the princess have a few million followers on Twitter and her own Facebook page?  Well, given that the Dalai Lama tweets and the pope just got an iPad, why not? But would she describe her relationship status as "complicated," friend Camilla Parker Bowles, get in poke wars with Nicolas Sarkozy, and post on Ai Weiwei's wall "So fab you're out!"? Uhh, maybe. Would she have "drifted into undercover trysts" and never forgiven her brother for his feats of " entitled beastliness"? Perhaps, but I lack Brown's stomach for speculating on it.

It's a sticky enough business when journalists venture to guess the motives and actions of the living. It's frankly unsettling when they go for it with the dead. E! Online called it the "Creepiest Magazine Cover Ever!" and the LA Times asked readers to rate the feature as "shocking, brilliant or just plain cheap"? And Newsweek commenters have been all but universally appalled at the "immature," "sick and wrong," and "crass" feat.