Bon Temps gets a little more witchy as Eric faces the coven, Tara returns and Sookie continues to irritate 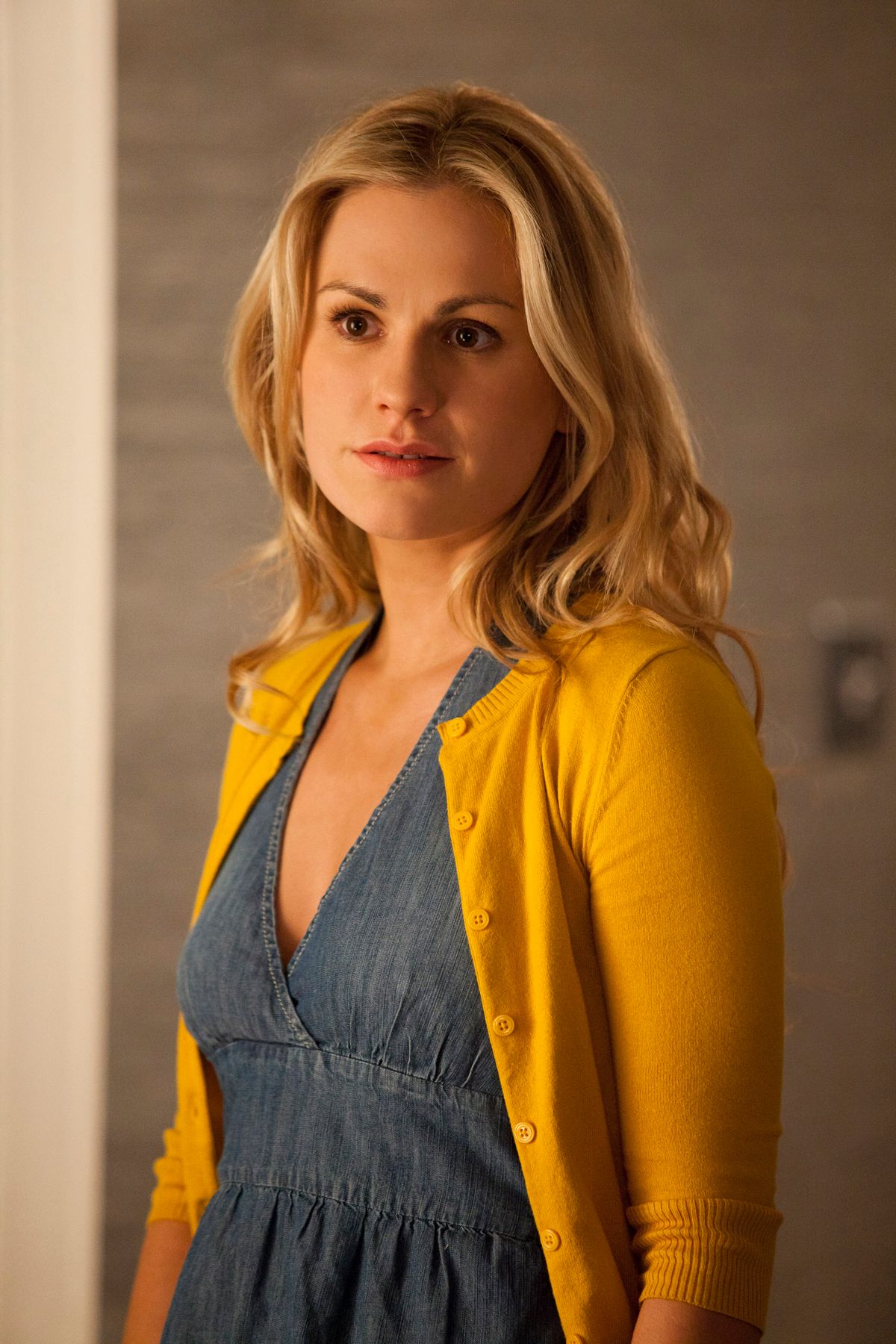 The second episode of "True Blood" starts where last week ended. Do you remember how last week ended? I mean, for each of the 10-1,200 characters that we the audience are supposed to have an emotional stake (ha!) in? No? OK, here it goes ...

Jason Stackhouse wakes up tied to a bed in the "Hills Have Eyes" community that he has been entrusted with after his V-addicted girlfriend Crystal went away to have sex with her brother. (Side note: How can something that is so hot on "Game of Thrones" be so disgusting on "True Blood"? Incest, she is a fickle turn-on.) Turns out Stackhouse has been conned by these young rednecks who eat raw meat and lick his head wounds, because he is just that dumb. Crystal and her half-brother Felton are back, and they want Jason to spawn little werepanther babies and continue their totally non-defected, inbred gene pool. But first Jason has to become a werepanther himself, in a ritual that looks a lot like the vampire's turning process: draining (or in this case, clawing) a person till they are almost dead, then waiting for the next full moon. I think they are a missing a step where Jason needs to drink (claw) their blood? So now he's all infected and gross. Man, Stackhouse, if only you were smart enough to outthink a family whose cumulative IQ adds up to less than Forrest Gump's. Alas.

But that's already too much time spent on Jason! Because last week actually ended with Sookie realizing that Eric bought her house, and is now free to roam around it and menacingly flirt with her as he pleases. He even built himself a little underground sleeping bunker in a cabinet! (Weird, doesn't she already have a basement?) Eric still wants Sookie to be his, which must be because of that damn fairy blood, because it is in no way due to her stellar personality.

Sookie marches over to King Ex-Boyfriend Bill's house, where he has finished biting and boning a lady from Lafayette and Jesus' Wiccan support group. After making her Sookie-judgment face, she demands that as king, Bill make Eric leave. Bill makes some vague remarks about Eric having powerful friends, but he'll still see what he can do. After barging in on Bill having sex, yelling at him to do her a favor, and then berating him for not being able to do it immediately, Sookie stalks out. Class act. By the way, this is usually how I convince my ex-boyfriends to do stuff for me.

But the mention of "powerful friends" makes Bill go all flashback-y: He's in London in the '80s, trying on his worst Cockney accent (surprisingly terrible for an actor who is actually British), when he runs into Nan -- she of the Vampire League of television pundits -- who promises him that one day he will be able to drink non-human blood if she joins up with her growing group of progressive vampires. Apparently True Blood was created by Louis Pasteur, we find out.

"Wait ... Louis Pasteur is a vampire?"asks Bill, as my head unconsciously starts reaching for the remote.

The purpose of this whole awkward flashback device is to show that Nan and Bill have been in on it since the beginning of the show: The plan was always to set Bill up as a dummy king, so they could take down the feudal system of vampires that are still attached to the old ways and replace them with peace-loving, True Blood-drinking hippies like Bill. In another flashback, we see Nan's stealth commando army kill off Queen Sophie Ann during that unresolved "Matrix" fight between her and Bill last season.

OK, so now there's no more Queen of Louisiana. Why does Bill get to be king? Why not dismantle this whole weird monarchy system (with the sheriffs and the magistrates and such) that the vampires have going on, instead of setting up a fake dictator? Oh well, the best laid plans of mice and vamps ...

In tangential character news: Hoyt and Jessica are still having domestic trouble, because she wants to be sexy and bite people other than her boyfriend at Fangtasia. But also those religious zealots are still picketing the bar ("We're living in a post-Russell Edington world," says one of the characters, referring to the best scene from last season), and Hoyt gets in a fight with one of the anti-fangbangers. Jessica starts to show her teeth, but one of the guys has a smartphone and threatens to upload the video to YouTube. (Timely!) Jessica could be the next "Do you know how many degrees I have?" subway lady!

Sam is in love with one of his shape-shifting buddies named Luna, and they have an innuendo-laden conversation while completely naked (no worries, they just transformed back from horse form, nothing weird here). For all his hotness, Sam is actually the worst at picking up women: If you are lying down naked in a field with someone and she has to ask if you are trying to hit on her, then your game is kind of off, bro. Apparently not, though, since later on Luna comes to Merlotte's and makes out with Sam in order to convince him to ... come to their weekly Shifter get-together? Doesn't he do that every week, anyway? These two are perfect for each other.

Another thing is, Luna is definitely something you name a horse, not a person, so I hope the twist this season comes when Sam realizes that his girlfriend is actually a shape-shifting horse that is pretending to be human. Court her with apples, Sam!

Arlene, still on her "Rosemary's Baby" kick, stares at her newborn so hard she breaks a blood vessel in her eye. Then she blames it on the kid. World's best mom! Or maybe the baby really is evil, "Pet Semetary"-style.

Lafayette and Jesus' witch group bring a dead bird back to life for half a second. It's all very "The Craft." Bill's sex buddy in the group brings him the news because she is a sleeper cell Wiccan or something, and he calls on Eric to make the witches stop their necromancing. See, if they can control the dead, they can control the undead. At first I was excited, and thought "Zombies!" but then I realized they were still talking about vampires. Zombies are next season.

Oh yeah, and Tara comes back. Hi Tara! You seem so happy! Let's see how long that lasts.

Another coven meeting attended by Lafayette, Tara and Jesus is interrupted by a cocky Eric, who demands they disband. Head witch (and total weirdo) Marnie gets all First Amendment on his ass -- because everyone has, like, the right to assemble, man -- and Eric decides it's time for a snack. Then he attacks Tara, and even though Lafayette gets PTSD every time he sees Eric (remember season one?), his desire to protect his cousin leads him to take up a chant that causes the witchy crazy lady to turn into a different witchy crazy lady and suddenly Eric goes from being like this:

(Remember how Eric was in "Zoolander"?? Amazing.)

Sookie goes to Fangtasia to demand that Pam do her this favor of getting Eric out, except Pam isn't so polite about saying no (because she is the best, and apparently the only character who consistently sees through Sookie's bullshit). Our waitress makes a short pit stop in the bathroom to chide Jessica for necking with another guy in the bathroom, because it's not a day in Bon Temps if our heroine ain't up in your business, judging the shit out of you.

On her way home, Sookie finds her new vampire landlord kind of shuffling around without a shirt on. What happened to his shirt, we wonder. He doesn't know; he's forgotten everything. Including who Sookie is, and why he shouldn't just take a delicious bite out of her fairy neck.

Unlike the last episode, this cliffhanger is actually suspenseful; though it's never been clear why a vampire incapable of "love" like Eric wouldn't drain Sookie at every opportunity, we suspend our disbelief and swallow the idea about him secretly having feelings for her. But without any memories, Sookie's sweet-smelling blood makes her nothing but a tasty meatbag to this airheaded vamp.