Does the Casey Anthony verdict end the story?

After three years, a sensational trial comes to a conclusion -- but the lurid fascination is hard to let go 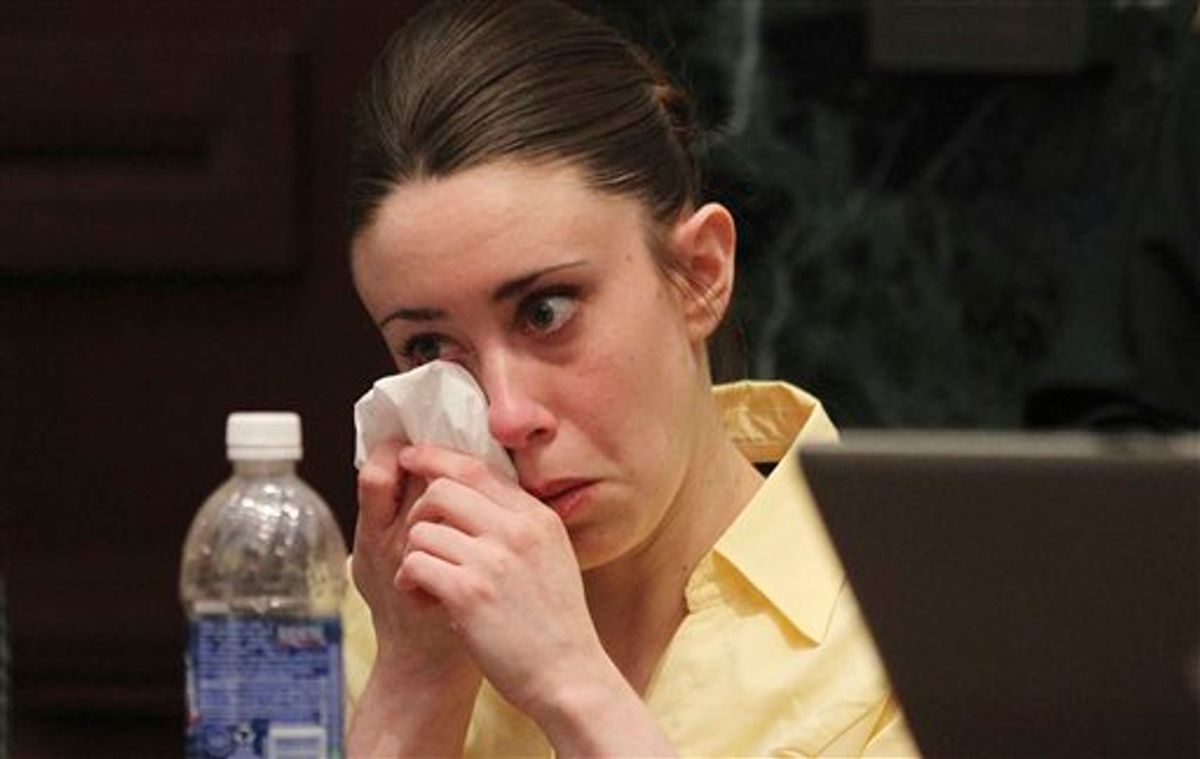 Casey Anthony reacts while listening to the defense's closing arguments in her murder trial in Orlando, Fla., Sunday, July 3, 2011. Anthony has pleaded not guilty to first-degree murder in the death of her daughter, Caylee, and could face the death penalty, if convicted of that charge. (AP Photo/Red Huber, Pool) (AP)
--

Not guilty. A Florida jury has found Casey Anthony not guilty of murder one, not guilty of aggravated child abuse, and not guilty of manslaughter regarding the death of her child. Does this mean the story that's riveted national attention and dominated the evening news is at last at an end? Not so fast.

As she stood in court Tuesday afternoon, a somber, buttoned-down Anthony went from frightened-looking to stunned to tearful as the jury foreman read off the charges against her – and systemically exonerated her of all but four counts of providing false information to law enforcement. Though she could face the maximum four-year sentence for her crime, Anthony, who has been behind bars for nearly three years, could be released as early as today.

Even in a world of interminable wars and collapsing economies, news reporting will always be ruled by scandal and drama. Yet nothing this year – not even Joplin tornadoes or the stunning recent reversals in the Dominique Strauss-Kahn case --  has consumed the mediasphere like the trial of Casey Anthony. The cable news networks have gone bonkers for the case, feeding a seemingly unquenchable public desire for blow-by-blow details of a story that for many seems too gruesome to imagine, let alone follow.

It was back in July 2008 that 2-year-old Caylee Marie Anthony was reported missing by her grandmother, who acknowledged at the time the child had not been seen in over a month. From the beginning, her 25-year-old mother, Casey, came under scrutiny for her erratic behavior and conflicting-to-flat-out-false accounts of what happened to her daughter. A frantic public search ensued, until the child's decomposed remains were found in December, with duct tape on her little skull. The case was ruled a homicide, and since then, Casey Anthony has been the prime suspect in her child's death.

As a mom with two young daughters myself, I've gone conspicuously out of my way to avoid the Casey Anthony saga these past three years. And with no desire to follow the story and no cable TV, you'd think it'd be easy. But the case is so pervasive, escaping it has been like trying to get around pollen in the springtime. It's there in every newsfeed, every teaser for the 10 o'clock news, blaring out from the front page of newspaper and tabloid magazines.

I get it, I really do. I've avoided it for exactly the same reasons others devour it -- its sheer, unfathomable awfulness. When faced with the unthinkable, it's human nature to try to understand it, to flail around for answers as to how it could happen.

The Casey Anthony saga is such a headline-grabber in part because it's a nightmarish tale of a lost child. Whether the story is about a toddler like Caylee, a child like the long missing, then recovered, Jaycee Dugard, or still unaccounted-for students Lauren Spierer or Natalee Holloway, the fear that someone could take a child, could harm her, shakes us to the core. If you're a parent, it's the familiar terror that briefly seizes you every time you lose track of your baby for a split second on the playground, or you send your teenager off into the night on her own.

But far more shocking than even a missing child is the story of the bad mother. There is no force in the universe with the same primal pull as mother. Mother, who grows her child in her body, who feeds her and rocks her and sings her back to sleep when the bad dreams attack. Mother, the first person in the world she learns to love, the one she trusts instinctively. A story that challenges all those notions we take for granted chafes aggressively against our ideals, not just as parents but also as sons and daughters ourselves. It flies in the face of our accepted notions of women as less violent, mothers especially. There's no one more vulnerable than a child, and there' s no greater betrayal than something terrible happening to her at the hands of the woman who gave birth to her. It's why stories like Susan Smith's and Lashanda Armstrong's – women who, driven by their own unimaginable demons to take their children's lives -- make for round-the-clock news. It's the ultimate sin.

Ultimately, even in a case that had conflicting narratives, chloroform, duct tape and a defendant the prosecution presented as a wildly unsympathetic parent, the jury decided there was reasonable doubt as to who was responsible for the death of Caylee Anthony. But in the eyes of the public that turned a Florida courtroom into a media spectacle, the idea that it could have been Casey Anthony won't go away with a three-syllable verdict. The story will remain haunting long after the defendant is once again a free woman. Because long before she was a murder suspect, Casey Anthony was a little girl's mother.