The "Harry Potter" star reveals his struggle with drinking. The real surprise is how well he hid it 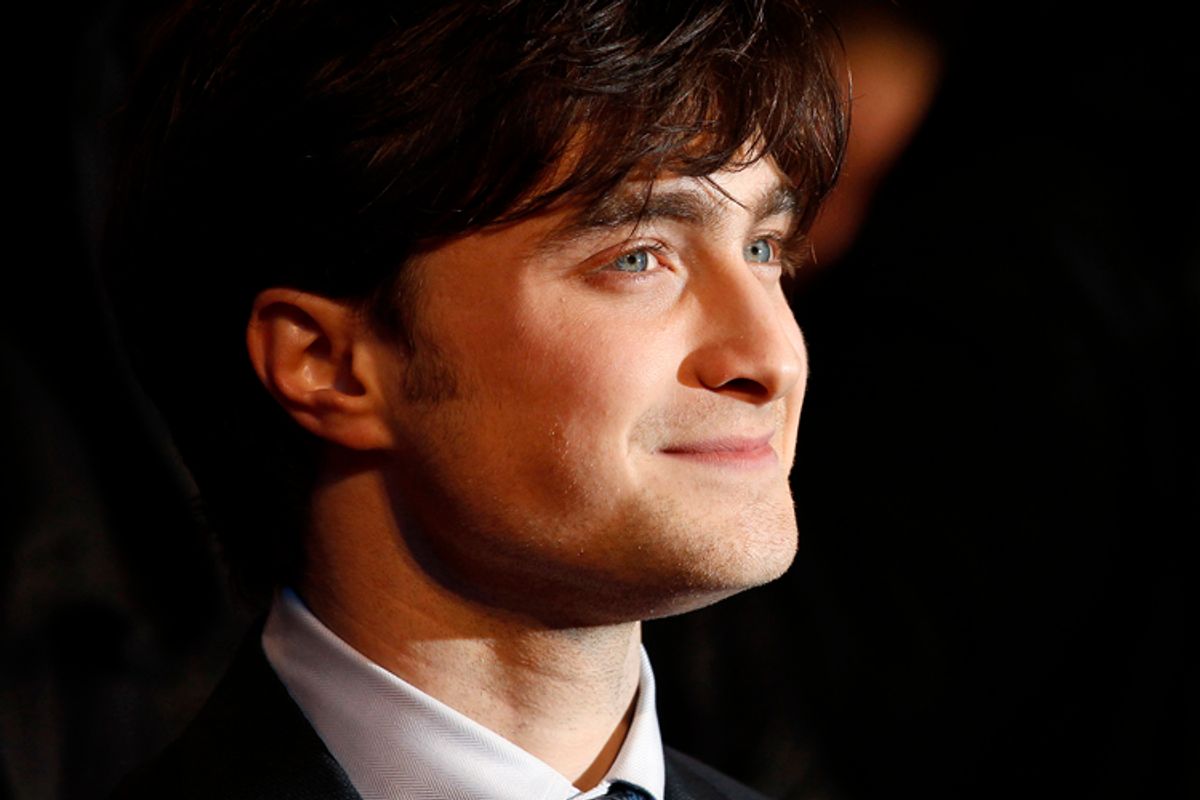 Britain's Daniel Radcliffe is seen posing as he arrives for the world premiere of "Harry Potter and the Deathly Hallows: Part 1" at Leicester Square in London in this November 11, 2010 file photograph. Radcliffe, 21, has spent nearly half his life as a movie star since he was first cast as Harry Potter a decade ago. REUTERS/Stefan Wermuth/Files (BRITAIN - Tags: ENTERTAINMENT SOCIETY PROFILE) (Â© Stefan Wermuth / Reuters)
--

The star of "Harry Potter" has battled a few demons of his own. In an interview for the new U.K. edition of GQ, the 21 year-old admits that he developed a drinking problem in his peak wizarding period, beginning during the filming of "Harry Potter and the Half Blood Prince" in 2007. "I became reliant on [alcohol] to enjoy stuff," he says. "There were a few years there when I was just so enamored with the idea of living some sort of famous person's lifestyle that really isn’t suited to me." Radcliffe now says he hasn't had a drink since August  2010.

What's surprising about Radcliffe's admission isn't that a very young person thrust into worldwide fame should find himself overindulging in the spoils of success. Rather, it's that he not only managed to avoid becoming a public train wreck in the midst of his very public adolescence, but has already determined to put his wild days behind him. He admits, "I really got away with that because there were so many instances when a paparazzi shot like that could have been taken."

The transition from bright-eyed moppet to adult star is a rough one for many young actors. And fueled by the 24-hour scandal cycle of tabloid news, the past few years have been a seemingly endless parade of youth in revolt. Disney princess Demi Lovato has struggled with emotional problems and eating disorders. Chris Brown was 19 when his domestic violence case blew up, and his temperamental behavior after a "Good Morning America" visit last April proves he's still got some acting out in him. Shia LaBeouf has a DUI behind him and a bar brawl from earlier this year. And then there's poor Lindsay Lohan – the girl who went from starring in "The Parent Trap" to having an alcohol monitoring device all but fused to her ankle.

In contrast, the stars of the "Harry Potter" – not just Radcliffe, Emma Watson, and Rupert Grint but even supporting actors like Tom Felton and Bonnie Wright – represent one of the least dysfunctional young ensembles ever assembled. The darkest thing about the cast seems to be Radcliffe's sober admission that "As much as I would love to be a person that goes to parties and has a couple of drinks and has a nice time, that doesn’t work for me."

With the final installment of the "Harry Potter" series set to open July 15, the big burden on its stars is now how to break out beyond their iconic, adolescent roles in one of the most beloved film series of all time. Radcliffe has spent the past few years testing the waters in unexpected ways – with his powerful starring stage role in 2007's "Equus," a lighthearted song-and-dance turn in Broadways' current "How to Succeed in Business Without Really Trying," and the upcoming ghost story "The Woman in Black."

But with his future uncertain and his present devoted to the bittersweet "Harry Potter" sendoff, is it possible that, like so many other stars who've been given so much so soon, he'll seek consolation again in substance abuse? At 21, plenty of people with far less opportunity find they're just hitting their stride of excessive behavior. It's one thing to calm down when you're an older, partied-out Robert Downey Jr. or Eminem. It's another when you're barely out of your teens and the character who's made you famous is retiring.

Yet there's something undeniably substantial to Radcliffe. It's there in his nuanced performances, his self-deprecating interviews, and his risky, challenging career moves. There aren't too many other guys at the top of the world who'd unscandalously tell a men's magazine, "There’s no shame in enjoying a quiet life, and that’s been the realization of the past few years for me I'd just rather sit at home and read, or go out to dinner with someone, or talk to someone I love, or talk to somebody that makes me laugh." And though he's conquered hungry spiders and fierce Death-Eaters in the make-believe world of movies, it takes a real man to understand that sometimes, the hardest thing to fight is your own temptation.