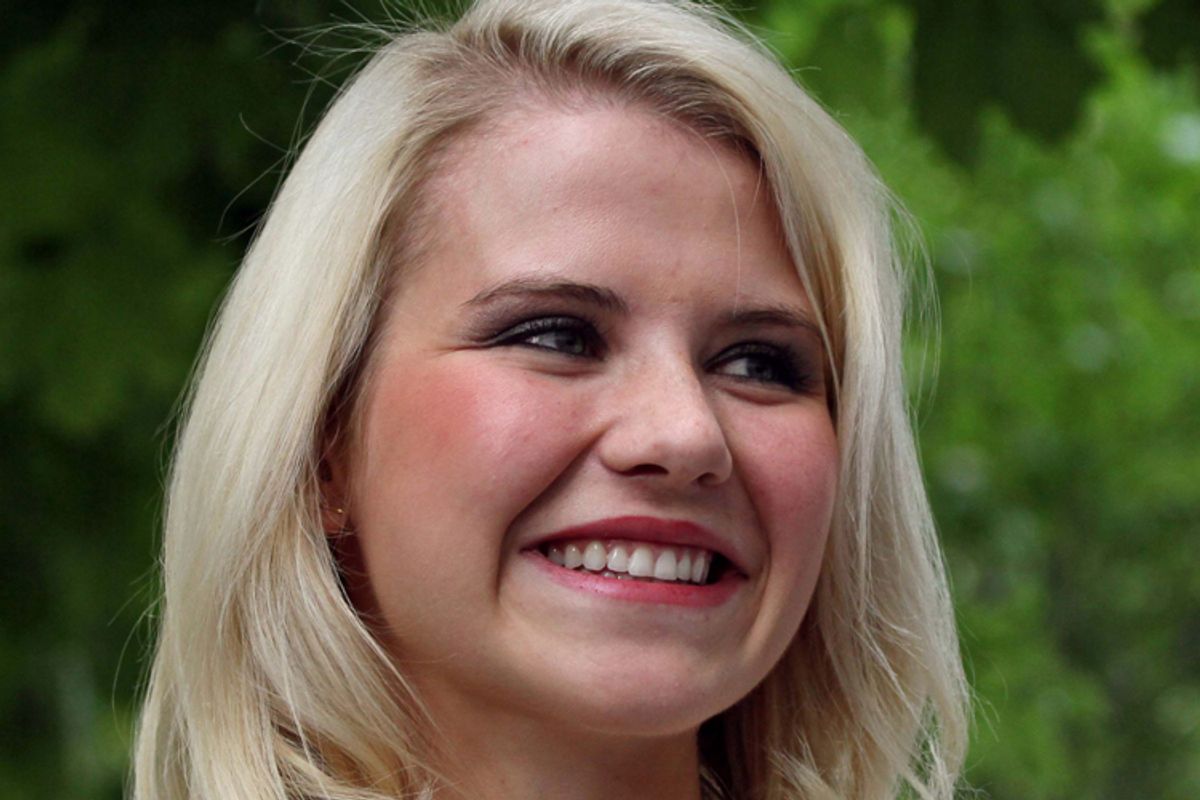 She's young, blond and articulate about her subject matter. Yet Elizabeth Smart's main credentials for her new gig as an ABC News correspondent aren't her mediagenic poise or a background in journalism. It's her past as an abducted child.

The now 23-year-old Smart was just 14 when Brian David Mitchell abducted her from her bedroom in 2002. For almost nine months, she was repeatedly sexually assaulted, abused and threatened with death. Since Mitchell's capture and her return home, Smart has become a vocal victims' rights advocate and co-wrote "You're Not Alone," a book for other abduction survivors. And now, ABC spokeswoman Julie Townsend tells the Daily Beast's Howard Kurtz that Smart will appear on "Good Morning America" whenever "there are missing children or missing-person cases in the news." Translation – expect more missing person stories to suddenly show up on the news.

The Casey Anthony trial may be over, but our national obsession with missing and exploited children isn't. The horrifying story of a lost toddler and the subsequent investigation of her mother for murder has been both a family tragedy and a surefire ratings grabber for three years now. So it's easy to understand why a network's news team would see the bottom-line possibilities here.

Townsend says, "This is definitely not about looking backward and telling her story, which has been well told and retold" but will instead be about "helping viewers understand missing-persons stories from the perspective of knowing what a family experiences when a loved one goes missing." Does anyone else think that sounds like it will involve "looking backward and telling her story"?

Having a relatable figure explain the news brings an undeniable amount of drama to the narrative. Nancy Grace launched her life in law and later television after the 1979 murder of her fiancé.  And it was the abduction and murder of John Walsh's son Adam that became the springboard for his role on "America's Most Wanted," a show that boasts of 1,154 captures in its more than two-decade run.

So why wouldn't "GMA" use a woman who brings personal experience to her role as a correspondent, and what, if anything, is wrong with the network focusing even more intently on missing persons stories? Maybe it's that, although Smart clearly has found a way of turning her horror story into one of hope and survival, ABC has now set her on a track as the go-to girl for horrible events involving lost children. It's hard to not smell a heavy whiff of exploitation in the network's apparent deepening interest in these kinds of stories -- with its parental fearmongering, right before that segment about how to look 10 pounds slimmer.

Elizabeth Smart's experience was unfathomably awful. It was also, thankfully, extremely unusual. There's no getting around the fact that bad things happen and people go missing, and that each story is some family's personal hell, but the truth is that it's a relatively rare phenomenon, one that gets media attention wildly out of proportion to its real-world occurrence.

And one can understand Smart's desire to use her notoriety in such a public way. On February 15, 2003, while she still missing, America's Most Wanted aired a sketch of a man known as "Emmanuel." After watching the show, the man's stepsons and ex-wife alerted the police that they believed they knew who he was. It was Brian David Mitchell, Elizabeth Smart's kidnapper.