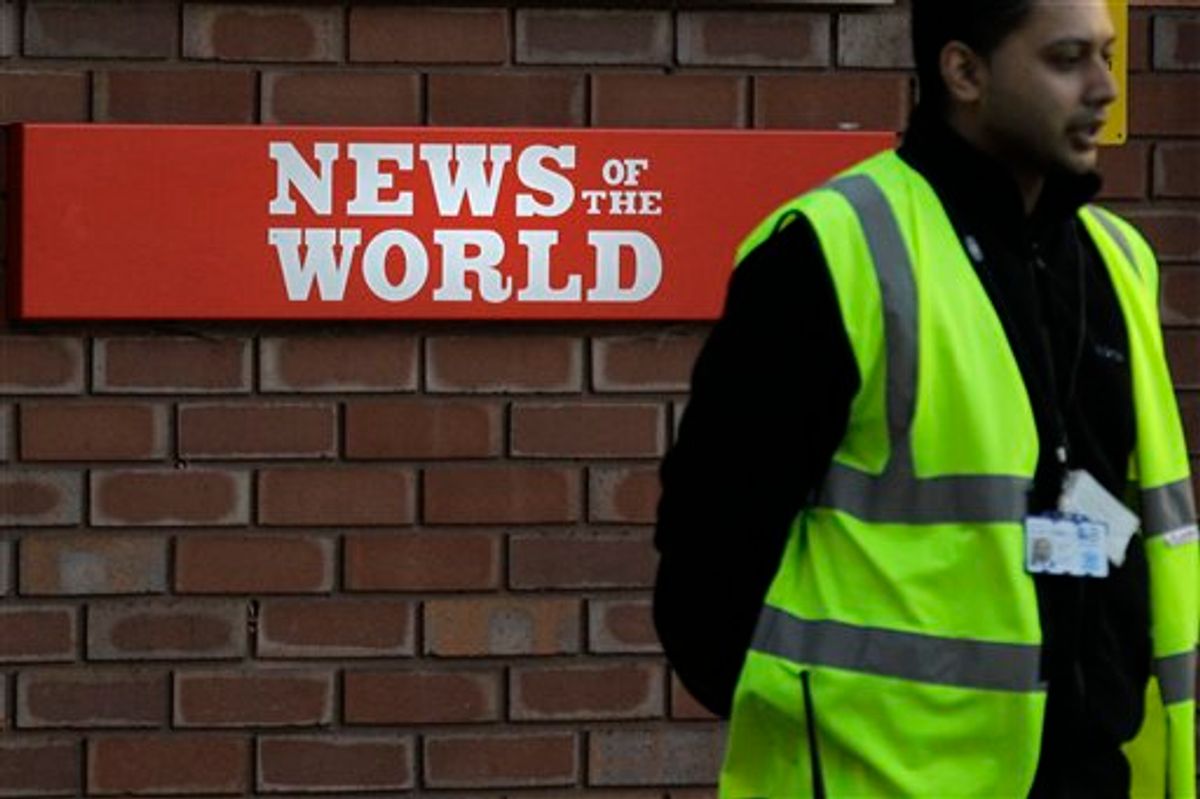 A security officer stands at the gates outside the publisher of News of the World, News International's headquarters in London, Thursday, July 7, 2011. Sunday newspaper News of the World is accused of hacking into the mobile phones of crime victims, celebrities and politicians, prompting News International to announce Thursday that the papers is to cease publication after publication upcoming Sunday. (AP Photo/Sang Tan) (AP)
--

Prime Minister David Cameron's former communications chief and a former royals reporter for the News of the World tabloid were arrested Friday, the latest to be swept up by Britain's rapidly evolving media scandal over phone hacking and bribing police.

Rupert Murdoch's media empire on Thursday shut down the 168-year-old muckraking tabloid, which has been engulfed by allegations its journalists paid police for information and hacked into the phone messages of celebrities, young murder victims and even the grieving families of dead soldiers. The revelations horrified both ordinary Britons and advertisers, who pulled their ads en masse.

London police said a 43-year-old man was arrested Friday morning on suspicion of corruption and "conspiring to intercept communications." They did not name him but offered the information when asked about Andy Coulson, Cameron's once-powerful aide and a former editor of News of the World.

The Press Association news agency reported that Clive Goodman, the former News of the World royal editor who served a jail term in 2007 for hacking into the phones of royal aides, was re-arrested Friday on suspicion of making illegal payoffs to police for information.

London police confirmed that a 53-year-old man had been arrested on suspicion of corruption. Detectives were searching his house south of London.

Cameron quickly distanced himself from a crisis knocking at the door of 10 Downing St., acknowledging that British politicians and the press had become too cozy and promising investigations into both the activities at the tabloid and into future media regulation.

"The truth is, we've all been in this together," Cameron told reporters at a hastily arranged news conference Friday morning. "Party leaders were so keen to win the support of newspapers that we turned a blind eye to the need to sort this issue. The people in power knew things weren't right but they didn't do enough quickly enough."

Coulson quit as editor of News of the World after Goodman and a private investigator were jailed in 2007 for hacking into the phones of royal aides. He maintained he knew nothing of the hacking, and was hired in 2010 as Cameron's director of communications. Coulson resigned from his Downing Street job in January as it became clear that hacking had been far more widespread at the paper.

Opposition Labour Party leader Ed Miliband on Friday urged Cameron to apologize for "the appalling error of judgment he made in hiring Andy Coulson," but Cameron refused and said Coulson remained a friend. Later the prime minister distanced himself.

"(Coulson) gave me assurances," Cameron said. "He said he had resigned because of what had happened, but he didn't know the hacking had taken place."

"I took a conscious choice to give someone who had screwed up a second chance," Cameron said. "He worked for me, he worked for me well, but actually he decided in the end the second chance wouldn't work, he had to resign all over again for the first offense."

The phone hacking scandal has not only sunk a venerable newspaper, but exposed an uncomfortably close relationship among British politicians, press and police.

Cameron said press self-regulation had failed and a new body, independent of the media and the government, was needed to properly enforce standards

The newspaper is closing down amid an expanding police investigation of phone hacking into missing girls and grieving families as well as celebrities, and the alleged press bribery of police officers for information. It comes just as media baron Rupert Murdoch is seeking U.K. government clearance for a euro12 billion ($19 billion) bid for full control of British Sky Broadcasting, a prize far more valuable than his British stable of newspapers.

Cameron signaled Friday that a decision on Murdoch's BSkyB takeover is likely to be delayed.

"Given the events of recent days, this will take some time," Cameron said.

Culture Secretary Jeremy Hunt said Friday the huge volume of responses to a public consultation on the takeover, said to exceed 100,000 submissions, would delay the approval process. Analysts expect the BSkyB deal approval to be delayed now until at least September.

Cameron said his friend Rebekah Brooks, a former editor of the tabloid, should have resigned as chief executive of News International, the British unit of Rupert Murdoch's News Corp. He also said there were questions to be answered by James Murdoch, the heir-apparent to his father's media empire.

"I want everyone to be clear: Everything that has happened is going to be investigated," Cameron said.

He said a judge will be appointed to lead a thorough investigation of what went wrong at the News of the World, including alleged bribery of police officers, and a second inquiry to find a new way of regulating the press.

Two employees of the tabloid were sent to prison in 2007 after being convicted of hacking into royal telephones, but the police investigation of the activity at the time has been slammed as incomplete or compromised by new bribery allegations.

The prime minister referred to reports that Brooks had offered her resignation. "In this situation I would have taken it," Cameron said.

A reporter asked whether James Murdoch was a fit and proper person to run a company, following his admission on Thursday that regretted authorizing out-of-court settlement to some hacking victims.

Murdoch's statement "raises lots of questions that need to be answered," Cameron said.

The scandal exploded collapsed this week after it was reported that the News of the World had hacked the mobile phone of 13-year-old murder victim Milly Dowler in 2002 while her family and police were desperately searching for her. News of the World operatives reportedly deleted some messages from the phone's voicemail, giving the girl's parents false hope that she was still alive.

That ignited public outrage far beyond any previous reaction to press intrusion into the lives of celebrities, which the paper had previously acknowledged and for which it paid compensation.

Dozens of companies pulled their advertising from the paper this week, fearing they would be tainted by association. James Murdoch then announced Thursday that this Sunday's edition of the tabloid would be its last and all revenue from the final issue, which will carry no ads, would go to "good causes."

News International, the British unit of Murdoch's News Corp., has not said whether it will move quickly to put another paper into the Sunday market that had been dominated for decades by News of the World. According to online records, an unnamed U.K. individual on Tuesday bought up the rights to the domain name "sunonsunday.co.uk."

Shares in BSkyB, which have fallen all week because of doubts whether the takeover will go ahead, were down more than 4 percent Friday in London trading at 779 pence ($12.40).

Shares in News Corp. rose 1.6 percent on the Nasdaq index in New York after Thursday's announcement.

The British government on June 30 already gave its qualified approval allowing News Corp. to purchase the 61 percent of British Sky Broadcasting that it doesn't already own, on the condition it spins off Sky News as a separate company. News Corp. made an initial offer of 700 pence per share, valuing BSkyB at 12.3 billion pounds ($19.8 billion). Analysts believe News Corp. may have to go as high as 900 pence per share to persuade shareholders to sell.

Despite the public outcry, many analysts think Britain will still sanction the takeover, since officials have already said any threats to media competition will be resolved with Sky News' spin-off.

Danica Kirka and Raphael G. Satter contributed to this report.