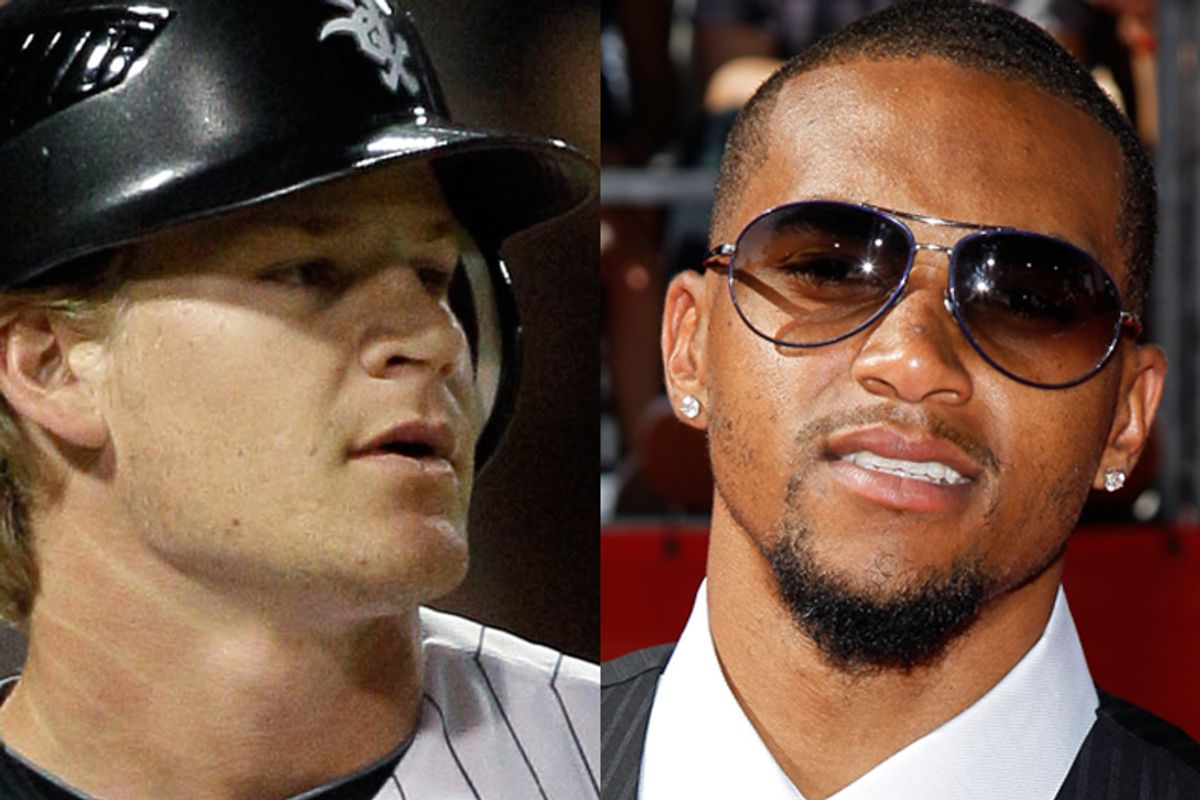 Dear professional athletes: Dudes, you have got to come up with new slurs. In April, Kobe Bryant mouthed off to a ref over a technical foul, calling him a "fucking faggot" to the tune of a $100,000 fine. Then in May, Chicago Bulls center Joakim Noah fired a "Fuck you, faggot" during a heated exchange with a fan in the stands. But apparently other sportsmen have not grasped the "teachable moment" that the NBA has of late so generously been offering.

First, during a June 30 Sirius XM radio appearance Philadelphia Eagles wideout DeSean Jackson did not take kindly when a caller asked if he'd ever "got his dick knocked in the dirt." "What type of question is that?" he countered. "Say 'no homo,' gay-ass. Faggot." Not content to let his "gay-ass" commentary speak for itself, he then took to – where else? – Twitter to insult grammar and spelling like they were homosexuals. "WANNA BRING ME DOWN BUT IM OK!!" he wrote. "THEY LOOKN 2 TAKE YA DOWN AT ALL TIMES NO MATTER HOW POSITIVE AND WHAT U DO!! ITS ALWAYS A WAY THEY TRY TO GET YA.... IM STANDIN TALL."

And just as predictable as the casual, knee-jerk homophobia-slinging from the über-masculine world of sports has been the "I'm sorry you feel that way" backpedaling that's arisen in its wake.

Jackson -- who earlier this year made a tear-jerking appearance on "The View" with a teen boy who'd survived a harrowing bullying episode -- has deleted his heated, all-caps tweets and says now via Twitter, "I am sorry for using words that I know to be hurtful and unacceptable in a recent radio interview. I have made a mistake and would like to make it clear that words I used meant no disrespect to the Gay and Lesbian community. Intolerance is unacceptable and I apologize to anyone I have offended." He also issued a statement saying that "in a recent radio interview a caller got really confrontational with me. I got very heated with the caller, took it a bit too far and did not mean to offend anybody. I meant no disrespect and a better choice of words was needed." It's a helpful goodwill gesture, but it loses credibility points for not even remotely resembling the writing style of the apostrophe-averse Jackson of earlier in the week.

Beckham, meanwhile, initially responded to his quite literal dustup by explaining, "Chris is one of my best friends. It was a joke. I didn’t know anybody could see. I didn’t mean anything, you know?" He then grasped at explanatory straws, adding, "I just want you to know that that's not me. I don't use slurs.  I didn't mean it as anything, you know ... like gay as in happy ! Or, you know, an alliteration -- 'Getz is gay.' It's the  first time I've ever done anything like that with Chris, and I  didn't even see his reaction. I asked  him afterward if he was going to write anything back, and he said no. It was wrong.  It was stupid. If I offended anyone, I apologize. I wish I could take it back, but I can't." Getz, meanwhile, has said he "wasn't offended" by the remarks.

On some level, Beckham and Jackson, like Tracy Morgan and other "fag"-bomb droppers of late, are likely entirely sincere when they say that they harbor no overt hate and that they didn't mean to offend. They were simply engaging in the oldest form of macho comeuppance in the book – comparing an adversary to something less than the traditional definition of what constitutes a "real" man. And whether used jokingly like Beckham or in anger like Jackson, it's precisely that diminishment, that flippant observation that another man is just a big sissy, that "What's the big deal?" mentality, that reflects how deeply engrained homophobia truly is. And it's that casual attitude that trickles right down to the schoolyard bullies.

Machismo runs deep in the testosterone-fueled world of physical competition. But how long do all of us, men and women, gay and straight, have to endure more offhanded displays of boneheaded insensitivity and half-assed apologies before it sinks in that words, in clumsy hands, do damage? It's not inherently insulting to call someone gay. But it's a massive put-down, to an entire class of people, to assume that calling someone gay is inherently insulting. And a real man knows the distinction.