Can "Winnie the Pooh" save Disney from Pixar? 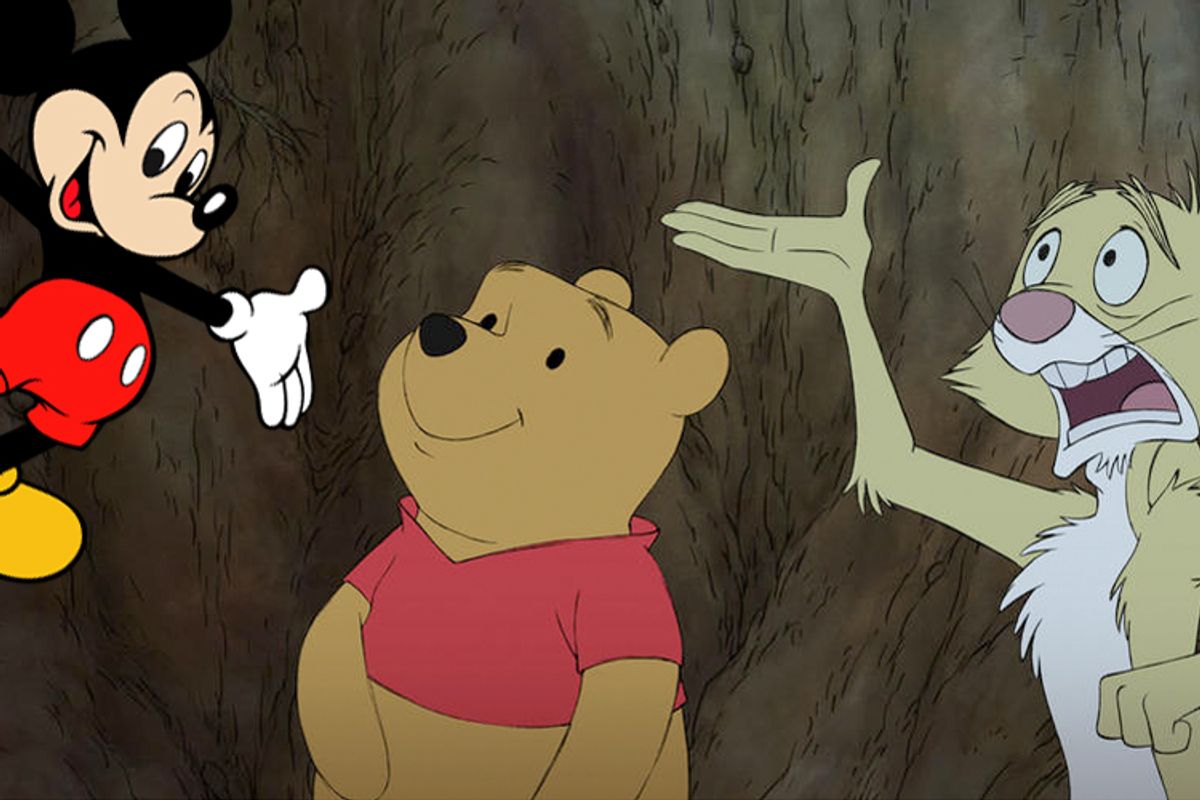 Can a Bear of Very Little Brain redeem the tarnished reputation of Walt Disney's venerable animation studio and stake his place on the cultural landscape alongside Buzz Lightyear and Lightning McQueen? That's a lot to ask of a tubby little cubbie whose principal concern is finding a pot of honey -- sorry, hunny -- but Disney's whimsical and charming new "Winnie the Pooh" feels simultaneously like a return to the company's more innocent past and a refreshing new direction. Specifically recalling the hand-drawn animation style of the widely beloved 1966 "Winnie the Pooh and the Honey Tree" and its sequels (anthologized in the 1977 collection "The Many Adventures of Winnie the Pooh"), and delivering only the faintest contemporary tweak to the Milne material, Stephen J. Anderson and Don Hall's "Winnie the Pooh" will thoroughly delight both the under-10 set and their nostalgic parents. Look for this to be a surprisingly potent sleeper hit; I'm going a second time this weekend.

Sterling Holloway, who provided the classic Pooh voice in the '60s, has been dead almost 20 years, but Jim Cummings (who also voices Tigger) has amiably filled the role in numerous lower-budget Disney productions and sounds uncannily similar. With John Cleese as narrator, Craig Ferguson as Owl and Jack Boulter as Christopher Robin, this production also has the right degree of authentic British-ness. (It's somehow fine with me that Pooh, along with Bud Luckey's Eeyore, sounds a bit more American.) But the real star of "Winnie the Pooh" is the imaginative animation, which features not one but two classic Disney surrealist sequences and a bit of playful postmodernism: Pooh frequently interacts with Cleese's narrator, or wanders out of the Hundred Acre Wood into the paragraphs of the book, accidentally bringing letters and punctuation marks back with him.

Of course the Mouse has been relentlessly cashing in on A.A. Milne's dimwit ursine hero ever since acquiring the rights from Milne's widow in 1961, and much of that output doesn't bear (ha!) thinking about: Piglet and Tigger got their own spinoff movies; there were Christmas and Thanksgiving and Valentine's Day specials and a seemingly endless series of tot-oriented "Winnie the Pooh Learning" and "Winnie the Pooh Playtime" titles. Let's not even bring up "Franken Pooh." Well, you can forget about all that stuff; Anderson and Hall have banished the insipid primary colors, not to mention the third-rate outsourced animation, and this film has the lovingly crafted, storybook feeling that was once Disney's specialty.

"Winnie the Pooh" feels like a turning point in the brief tenure of Walt Disney Animation Studios head John Lasseter -- whose other company, Pixar, effectively destroyed Disney's old in-house animation unit. Lasseter has said frequently that Disney Animation should have its own identity, one that draws on the company's glorious past and doesn't simply ape Pixar's success, and maybe now we can see what that means. "Winnie the Pooh" doesn't look or feel anything like a Pixar movie, and it is specifically not trying to be a "kidult" crossover success, after the fashion of almost every Pixar production. But it also feels mercifully free of the combined calculation and sloppiness that have plagued so many Disney features in recent years, and one could argue that the painstaking attention to animation and storytelling reflect Lasseter's stewardship.

Let's take to the way-back machine for a minute. Ever since the Walt Disney Co. began its partnership with Pixar, then an upstart digital-animation studio run out of an industrial park in Emeryville, Calif., the Mouse's own in-house animation unit has struggled to keep up. Actually, that's being euphemistic; what really happened was that Pixar kicked Walt Disney Feature Animation's butt so badly that the division was ultimately dissolved and renamed. In 1995, "Toy Story," the first Disney-Pixar release, grossed $354 million worldwide, which represented at least a tenfold return on its production costs. Walt Disney Feature Animation also had a big hit that year with "Pocahontas," which premiered outdoors in New York's Central Park and went on to its own $300 million-plus worldwide take. (Mind you, it also cost several times more to make than "Toy Story" did.)

Not even Lasseter, who co-founded Pixar and directed "Toy Story," would have predicted 16 years ago that Pixar would go from one massive success to the next, becoming one of the most beloved brands in entertainment history, or that "Pocahontas" was the last big hurrah, or next-to-last, for Walt Disney Feature Animation, which had created such massive hits as "The Little Mermaid," "Beauty and the Beast" and "The Lion King." When Pixar released "Toy Story 2" in 1999, another huge worldwide hit, WDFA's big release was "Tarzan," a wildly expensive production (not to mention an entirely forgettable film) that probably ended up in the red. Disney's in-house studio had one more sizable hit, with "Lilo & Stitch" in 2002. But that movie earned $100 million less than Pixar's "Monsters Inc." had a year earlier and took in less than one-third the worldwide gross of Pixar's huge 2003 hit, "Finding Nemo."

At that point the writing was on the wall: Pixar engaged an enormous public with cutting-edge animation technology and appealing characters and stories, and reaped untold billions in box-office receipts, tie-in merchandise and ancillaries. Disney's in-house animation studio, on the other hand, was an embarrassing albatross. There were straight-to-video quickies, cashing in on existing properties in the most unfortunate Disney tradition: "Mickey's Twice Upon a Christmas" and "Mulan II" and "Tarzan II" (with "new songs by Phil Collins," apparently meant as an inducement). The last release under the aegis of Walt Disney Feature Animation was "Chicken Little" in 2005, a work of supremely crappy-looking fake-Pixar animation that features 11 credited writers and Zach Braff in the title role. I would have been happy to completely forget that movie's existence. (In fact I had, until now).

Lasseter has been at the helm of the reconstituted Walt Disney Animation Studios for almost five years, while continuing to run Pixar, and the results of this seemingly contradictory role are still a bit unclear. The first two Disney features made on his watch, "Meet the Robinsons" and "Bolt," felt way too much like Pixar movies, with substandard animation and the rough edges sanded off. I'm aware there's a critical constituency for both films, but that didn't extend far into the public, and both were box-office flops. With the hand-drawn "Princess and the Frog" and the digital "Tangled," Disney tried to breathe new life into its classic tradition of adapting fairy tales. Neither performed as well as expected, but they displayed more craft, integrity and audience appeal than any other Disney animated feature in years. ("Tangled" was reportedly so expensive to make that even its worldwide gross of almost $400 million might not have returned a profit; "The Princess and the Frog" failed to click with American audiences but did well overseas.)

It's almost not worth mentioning that "The Princess and the Frog" was artistically and financially eclipsed by Pixar's "Up," and that "Tangled" was obliterated by the astonishing billion-dollar worldwide gross of "Toy Story 3," the biggest animated feature in history. The same thing is likely happen again this summer; even though many Pixar-friendly critics have turned against Lasseter's "Cars 2," audiences don't seem to mind. But coming as it does after those two films, "Winnie the Pooh" feels like more than a small summer surprise that will utterly charm 3-year-olds and 93-year-olds. It feels like a Walt Disney animated film, in the best possible sense of that term, and another significant step toward restoring that company's dignity and sense of purpose.