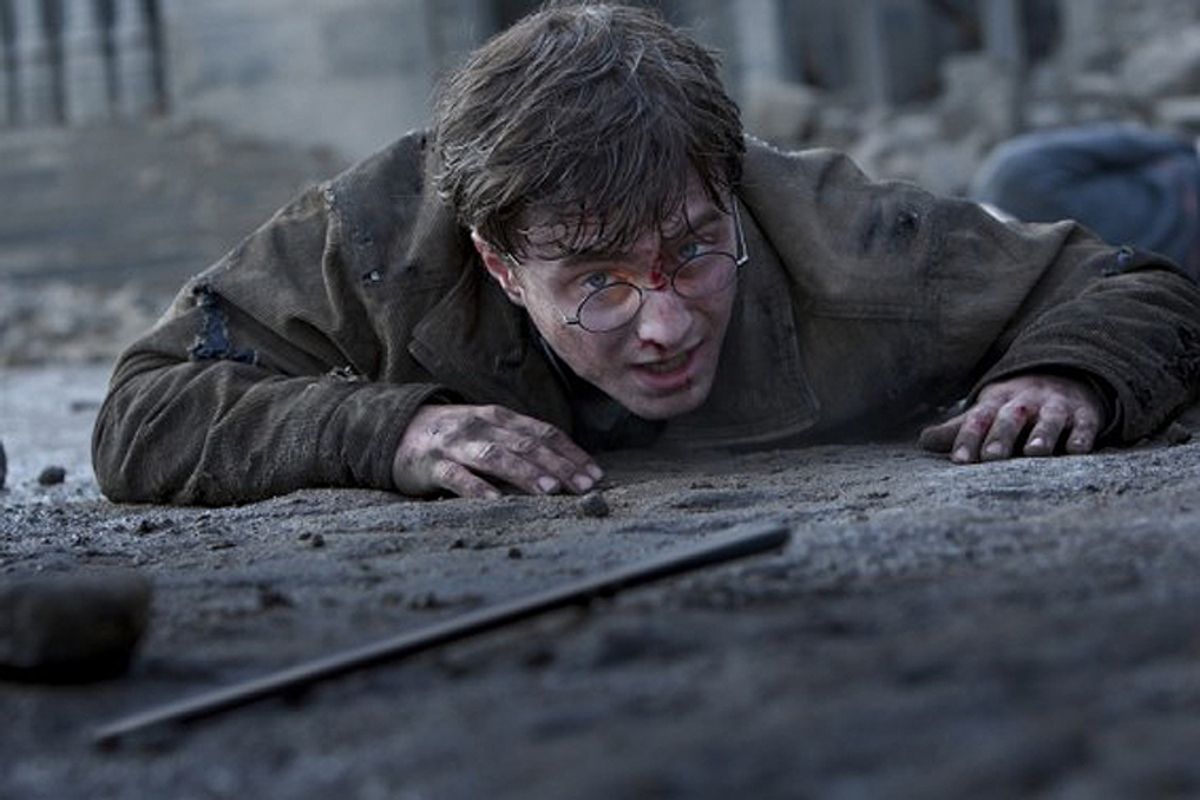 Daniel Radcliffe in "Harry Potter and the Deathly Hallows: Part 2"
--

Conclusions to fantasy epics and quest narratives pose a diabolical problem for their creators, one that calls to mind a remark I once read in a journal by Edmund Wilson, one of the 20th century's greatest cultural critics. Late in his life Wilson had decided to give up reading history, he wrote, because "I know the kinds of things that happen." Epic fantasy is, if possible, even more familiar than history, in that we know exactly what will happen: Good will triumph over evil at great price, but only after the hero endures a crisis of self-doubt and agrees to sacrifice himself for the greater good. So the execution of such a conclusion becomes largely a technical matter, a matter of How more than What, and still less Why. In the case of "Harry Potter and the Deathly Hallows: Part 2," a movie with no beginning and no middle but two-plus hours of thundering, momentous ending, all of this is carried to a comical extreme.

I'm not trying to wage some kind of King Canute battle against the tide of approbation for this remarkable series and its final chapter, honest. I am suggesting that we're all congratulating the filmmakers for not having screwed the whole thing up too badly. (Which is something to be celebrated: Consider the ever-dwindling "Chronicles of Narnia" series, or the disastrous efforts to turn Philip Pullman's "His Dark Materials" and Lemony Snicket's "Series of Unfortunate Events" into movie franchises.) Director David Yates, screenwriter Steve Kloves and their formerly young cast -- Daniel Radcliffe, Rupert Grint and Emma Watson began this enterprise as schoolchildren and now seem ready for divorces and rehab clinics -- bring the Potter cycle to rest with a great cinematic clash of cymbals (and symbols). "Harry Potter and the Deathly Hallows: Part 2" is a grave and violent picture built around the large-scale destruction of Hogwarts, Harry's beloved alma mater, and the final confrontation between Harry (Radcliffe) and the reptile-headed Dark Lord Voldemort (Ralph Fiennes), who are linked to each other in ways they don't quite understand.

As he began to do in "Deathly Hallows: Part 1," Yates deliberately recalls the inspirational movies about the blitz of London and the lonely courage with which the British faced Hitler in the dark early years of World War II. I don't know whether J.K. Rowling has ever discussed the Battle of Britain as an influence on her fantasy universe, but she's precisely the right age to have been raised on such national mythological tales of Churchill-era nobility and sacrifice. While most of "Deathly Hallows: Part 2" is set in and around the climactic siege of Hogwarts -- in which, yes, some beloved Potterworld personages will die -- we also see Harry, red-headed Ron (Grint) and shockingly grown-up Hermione (Watson, of course, but in this sequence also played by Helena Bonham Carter, and don't make me explain) stage a daring raid on the Gringotts Wizarding Bank, which ends with an abused captive dragon totally destroying the place. Any consonance with current events, which renders it especially satisfying to witness a bank reduced to rubble, is presumably coincidental. (As we now know, many financial institutions in the Muggle universe are also run by greedy and untrustworthy goblins.)

If the Gringotts raid is one of the Potter series' most effective uses of large-scale CGI effects, I found much of the final battle at Hogwarts, including the O.K. Corral showdown between Harry and Voldemort, disappointingly generic. Oh, I don't mean that it's boring to sit through, exactly. There's a whole lot of spell-casting and Death-Eating and exploding Gothic architecture and Fiennes' lizard-man Voldemort howling in pain and pointlessly murdering underlings as Harry and friends gradually discover and destroy the Horcruxes that contain fragments of his soul. (I can't stop myself: The next-to-last Horcrux is inside ... mmrp! Stifled by the Spoiler Cops, just in time.) Yates and cinematographer Eduardo Serra do a nice job of keeping the viewer oriented in space and time, no mean feat when space is an imaginary digital artifact and time is completely elastic. There's a lovely and crucial flashback sequence into the memories of über-Goth potions expert turned Hogwarts headmaster Severus Snape (Alan Rickman) -- for my money the most compelling character in the whole series -- whose long-running and ambiguous role in the Potter mythos is finally revealed.

Along with Rickman, numerous other beloved players make final cameos, making this peculiar film -- which is simultaneously too short and too long -- feel an awful lot like an extended curtain call. Maggie Smith as Prof. McGonagall and Jim Broadbent as Prof. Slughorn, Robbie Coltrane as Hagrid, Tom Felton as the chastened Draco Malfoy, Bonham Carter as the adorably evil Bellatrix Lestrange, David Thewlis as lycanthrope Remus Lupin and Evanna Lynch as New Agey Celtic seer Luna Lovegood all get a few seconds of screen time. So do various departed characters, including Harry's long-dead parents, Gary Oldman as Sirius Black and of course Michael Gambon as Albus Dumbledore, who appears in a misty-moisty afterlife scene where Yates simultaneously manages to screw up a crucial plot point and render the spiritual underpinnings of the entire Potter franchise as total bollocks. (We also meet Dumbledore's grouchy brother, nicely played by Ciarán Hinds, a personal favorite.) And I guess Harry's so-called paramour Ginny Weasley (Bonnie Wright) makes an appearance, but not so you'd notice it. (Potter fans hate me for this one, but the submerged sexual tension between Harry, Hermione and Ron is a central element of this universe, and one Rowling herself seems barely aware of. Ginny is a transparent and inadequate attempt to defuse it.)

What bugs me about "Deathly Hallows: Part 2" may be an inevitable consequence of the fact that Yates and Kloves, previous directors Chris Columbus, Mike Newell and Alfonso Cuarón, and everybody else who's worked on this amazing 14-year, eight-film odyssey has had to serve so many masters. Loyalty to both the letter and spirit of Rowling's books was more important than it almost ever is in a Hollywood production, because the universe of Potter fandom is so large, so well-organized and so vocal. But the filmmakers also had to appeal to moviegoers who hadn't read the books and were absorbing the whole story on-screen, as well as casual viewers who might dip in and out, depending on reviews or what their friends said, in search of an exciting yarn but without much caring about the history of the Diadem of Ravenclaw or the backstage intrigue among the Hogwarts faculty.

Viewed in that light, "Harry Potter and the Deathly Hallows: Part 2" is an adequate and often artful exercise in checking off boxes. If you haven't imbibed a minimum of four or five other Potter books and/or movies, including "Deathly Hallows: Part 1," then the exposition surrounding the action sequences will be total gibberish and you shouldn't even bother. (By the way, I saw it in Imax 3-D, and unless you can't stop yourself don't spend the extra money.) This is almost entirely a movie for the Potter fan base, which may have been the only possible outcome in adapting Rowling's torrents of verbiage, dense plotting and encyclopedic arcana. But this final installment, driven far less by acting and characterization than any of the preceding seven, fails the Peter Jackson test of becoming an affecting and absorbing work on its own terms.

The "O Children" sequence in "Deathly Hallows: Part 1," and indeed the entire haunted, lonely middle section of that vastly superior movie, have stayed with me powerfully. Hours after seeing this one, I don't look back on it with any emotion, or even much in the way of sense-memory. Radcliffe as Harry, and even more so Fiennes as the wounded Voldemort, who feels victory escaping his grasp as evil wizards always will, are both splendid. But the final confrontation between these intertwined geniuses, at least as we see it here, has no moral or intellectual heft; it's a lightning-bolt battle out of a 1980s "Doctor Strange" comic. (I'm not saying that's the worst thing in the world.) Seconds later, I was out on the sidewalk in front of the theater, feeling a little baffled and irritated: Wait, Dumbledore said what to Snape and what to Harry? Voldemort is incapable of killing Harry because ... why, exactly? Which Horcrux is the giant snake and which one is the Magic Cup of H.R. Pufnstuf? What the Sam Hill are the Deathly Hallows again, and what do they have to do with anything? (Answer: They don't.)

So ends this enormously important, and enormously extended, chapter of pop culture, with a combination of bang and whimper. Nothing quite like this series has ever been tried before in cinema history, and as I wrote last year, following the central trio of Radcliffe, Grint and Watson through the aging process has itself forced the movies to confront Rowling's central themes, which I take to be "the painful transition from childhood to adulthood, the loss of parents and loved ones, the first intimations of personal mortality." For better or worse, Rowling's books and the hit-and-miss movies based on them have reshaped not just the marketplace for fiction and film but the contemporary cultural imagination, re-establishing fantasy as the central narrative mode (arguably for the first time since the Middle Ages). I suspect that Rowling will remain popular for a long time while the films fade a lot more rapidly into the background. But we have only begun to live in the world they made.