This week we're on the fence about: Slave Leia costumes, Lindsay Lohan in "Black Swan," Emmy nods and angry pandas 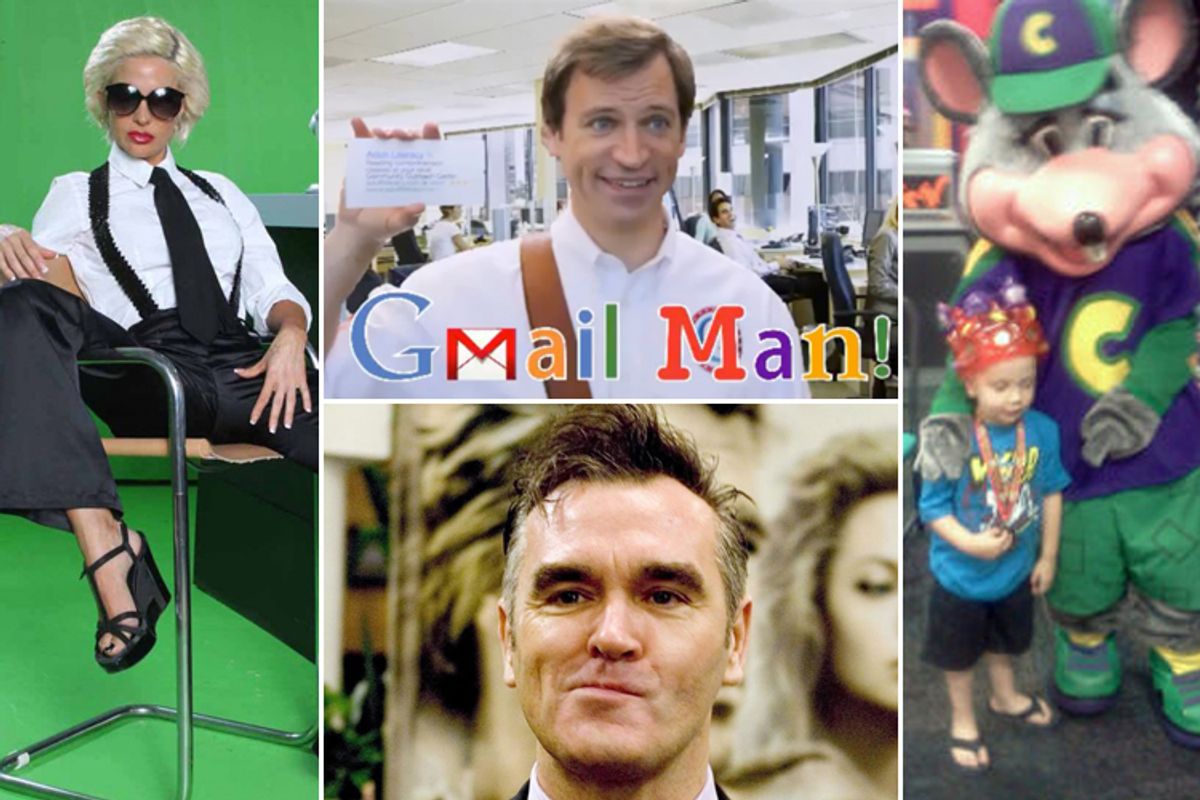 The phrase "slow news week" is a cheap, lazy way of saying, "We couldn't be bothered to find any good stories." But it has been a slow culture week: I think even Billy Bush is ready to put the gun in his mouth at this point. A lot of celebrities just had kids, so that's always news for a day or two. Some other ladies are pregnant. Monkey marriages are being hotly contested in India. Harry Potter? Bastille Day? And that's about it!

Luckily (or not), turning over the giant boulder of the week exposed some weird-looking specimens. All it took was a little digging. Enjoy them ... or not!

1. Lindsay Lohan pissed she didn't get a role in "Black Swan": It's hard to sympathize with someone complaining about losing out on an Oscar-winning part to an actress who wasn't on house arrest.

2. Katie Holmes already saving maternity clothes for Suri Cruise: Also, her 5-year-old will "probably be an actress," and will bow down to Xenu. Totally normal parental expectations.

3. Hugh Grant still taking credit for bringing down Murdoch's paper: Yo, Hugh. You can get down off that cross now, we all still remember why News of the World was interested in you in the first place.

4. Rilo Kiley breaks up: This is really sad, but if we have to sacrifice Rilo for the Black Eyed Peas' indefinite hiatus ... no, it still doesn't even out.

5. Brad and Angelina are getting married ... or not: I thought they were waiting until gay marriage was legalized everywhere? Maybe now that it's legalized in New York, they can be one step closer to thinking about maybe doing it.

6. Netflix is going to raise its prices and there isn't a damn thing you can do about it: This is what you get for putting your local movie store out of business because it was just so convenient to have movies mailed to you. Now you've created a monster with a(n almost) monopoly on rentals, and you'll pay that 60 percent increase because what else can you do? I'm sure there is an allegory here about Netflix being "too big to fail" ... but I have to wait till that movie is up on Instant Queue to find out what it is. (I was planning to read the book, but it turns out buying it would cost the same as a month of Netflix.)

7. ... Or possibly Netflix is about to go under: This bold move could backfire terribly, as the company gets sucked dry by bad partnerships and subscribers plummet. Quick, everyone go to Apple TV or Amazon and start streaming stuff, stat! There's going to be a run on the movie streaming centers, and it will be like the Great Movie Depression all over again! (Just saw "Too Big to Fail" with HBO on the Go and now I totally have my Netflix analogue in order.)

8. The contentious Emmy nominations: Totally called it with Peter Dinklage getting a nod for the critical darling "Game of Thrones," but the committee's total lack off recognition for "Community" (you're telling me that Dan Harmon's comedy isn't as good as "Degrassi" this season??) has sparked a war that will only end once Sean Bean or Chevy Chase's head is on a spike.

9. Women at Comic-Con: Next week is San Diego's comic book/fantasy/sci-fi/franchise festival, and it's about time the convention sponsors made a PSA for those of us who were still planning to show up as Slave Leia this year.

10. Workweek-defining pandas: You don't even know how many hours this panda has logged this week on the Johnson case, and now you're telling him that Johnson's been dropped as a client? And you forgot to cc him on the memo? That's just great. We can all relate to this panda, can't we?