The War on Terror, now starring Yemen and Somalia

The U.S. continues to spawn the very Terrorism problem it claims to combat, with the media helpfully in tow 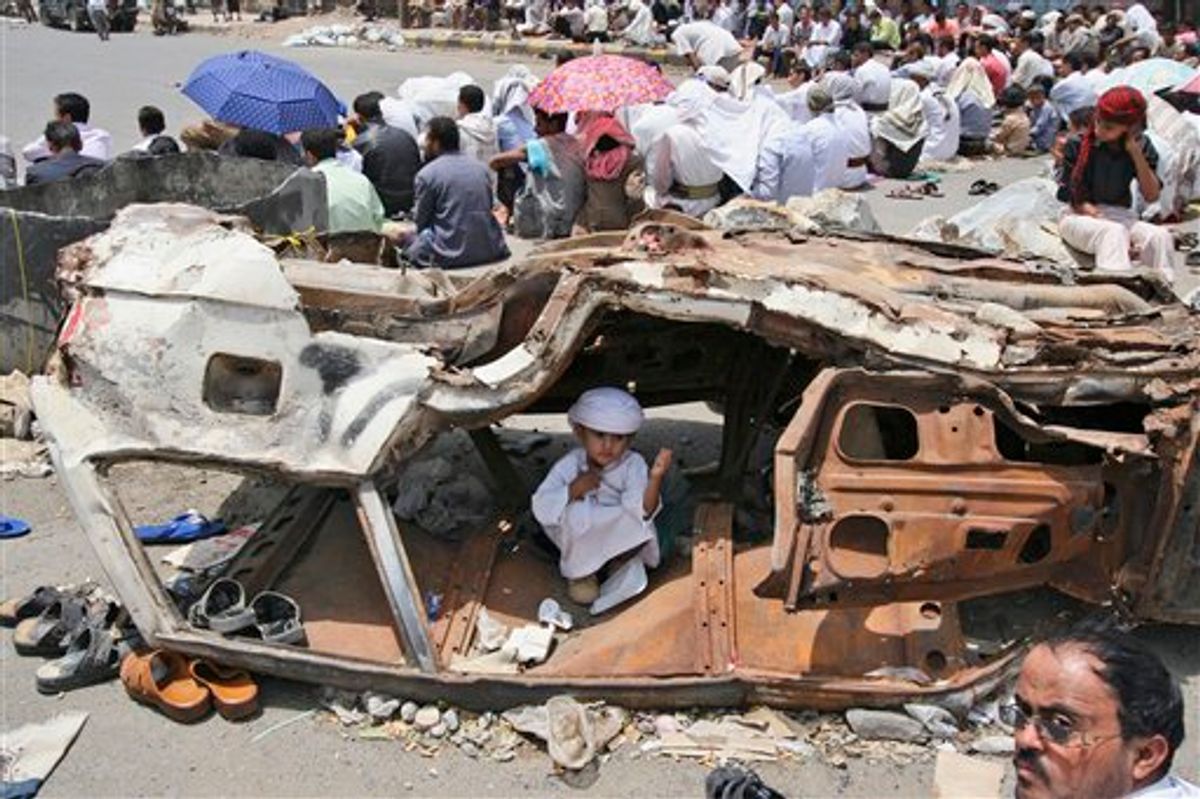 A Yemeni boy sits inside a wreckage of a car while anti-government protestors, attend Friday prayers, during a demonstration demanding the resignation of Yemeni President Ali Abduallah Saleh, in Taiz, Yemen, Friday, July 15, 2011. Tribesmen killed a Yemeni army officer and two of his aides in an ambush Friday, and government shelling killed two civilians in a volatile southern area, officials said. (AP Photo/Anees Mahyoub) (AP)
--

There is a concerted campaign underway to ensure that the War on Terror bonanza continues unimpeded in the wake of Osama bin Laden's death, and even despite Leon Panetta's acknowledgment that Al Qaeda has a grand total of "fewer than two dozen key operatives" on the entire planet.  That effort relies primarily on touting a growing villainous alliance -- the scariest since Marvel Comic's Masters of Evil -- between Al Qaeda in the Arabian Peninsula (mostly in Yemen) and the al Shabab group in Somalia.  To accomplish this, all the standard fear-mongering propaganda is being trotted out, and the War on Terror apparatus is simply being re-directed to those nations.  Most notably, the establishment media is being used to disseminate these messages, using its familiar journalistically bankrupt practices to serve this agenda.

In recent months, government officials have been insisting that the greatest Terrorist threat now resides in Yemen.  Almost before the Al Qaeda leader's body hit the ocean floor, U.S. citizen Anwar Awlaki, in Yemen, assumed his (fabricated) role in American government and media depictions as The Next Osama bin Laden.  The Obama administration has escalated the existing drone program and begun a new CIA drone campaign in Yemen (one that just killed numerous people over the weekend); it also, contrary to public denials, provided the arms to Saudi Arabia to attack a rebel group in Northern Yemen.  Yemen is also the justification for Obama's attempt to institutionalize a due-process-free assassination program aimed at U.S. citizens.  The administration just commenced a separate drone campaign in Somalia.  And, as Jeremy Scahill revealed last week, the U.S. is relying upon interrogations conducted in a secret prison in Mogadishu, filled with people from that country and those rendered at the behest of the U.S. from other African nations.  Just like The Communist was seamlessly replaced by the Terrorist when a new enemy was needed, the death of Osama bin Laden and the virtual non-existence of Al Qaeda in Afghanistan means that Yemen and Somalia are the New War on Terror Battlegrounds.

Typifying the subservient role played by the establishment media in propagating this narrative is this new article in The Los Angeles Times by Brian Bennett.  Headlined "Al Qaeda's Yemen branch has aided Somalia militants, U.S. says," the article grants anonymity to "U.S. counter-terrorism officials" to do nothing more than echo the official administration line:  that we now face "a widening alliance of terrorist groups."  These anonymous officials claim that "leaders of Al Qaeda in the Arabian Peninsula in Yemen [] have urged members of the hard-line Shabab militia to attack targets outside Africa for the first time" and that bin Laden "had sought to strengthen operational ties between Al Qaeda and the Shabab."  In other words, anonymous, unaccountable intelligence officials went to the L.A. Times to depict desires and aspirations of a scary Terrorist alliance as fact, and that paper uncritically headlined these scary developments.

While there's nothing notable about this corrupt journalistic practice -- granting anonymity to government officials to spout the official line and uncritically printing it is the heart and soul of Real National Security Journalism -- there are a couple of particularly egregious passages in this article worth noting.  To underscore how mindlessly devoted Bennett is to promoting the government line, consider this passage:

In a sign of the expanding front, U.S. drone aircraft fired missiles at suspected militants in Yemen in May, and in Somalia in June. They were the first known U.S. military attacks in Yemen since 2002 and in Somalia since 2009.

That claim is factually false, in a very significant way.  In December, 2009, U.S. cruise missile carrying cluster bombs were dropped in Yemen, killing 41 people, including 14 women and 21 children.  Cables released by WikiLeaks subsequently revealed that the Obama administration perpetrated that attack, as well as a second air strike that same month (which targeted Awlaki).  In May, 2010, the Obama administration launched another attack in that country, one that "killed the province's deputy governor, a respected local leader who Yemeni officials said had been trying to talk Qaeda members into giving up their fight," which was "at least the fourth such assault" in Yemen since December, 2009.  Not only was there no public discussion by American officials of this escalated bombing campaign, but the U.S. allowed its close ally, Yemeni dictator Ali Abdullah Saleh, to falsely and publicly claim sole responsibility.

Yet here we have the LA Times' Bennett, serving his government directors, telling his readers that the drone attacks in May of this year "were the first known U.S. military attacks in Yemen since 2002."  What makes that so inexcusable -- aside from how factually false it is, and how bizarre it is that a reporter writing about Yemen wouldn't know that -- is that those 2009 and 2010 attacks, which Bennett concealed from his readers, are playing a very significant role in why there is a Terrorism problem in Yemen in the first place.  As The Christian Science Monitor explained when reporting on the 2009 American cluster bomb attack in Yemen:

Just as high civilian casualties in US attacks on militants have fed extremism in Iraq and Afghanistan, the same phenomenon is now playing out in Yemen, says Yemen specialist Gregory Johnsen.

"It is incredibly dangerous what the US is trying to do in Yemen at the moment because it really fits into AQAP’s broader strategy, in which it says Yemen is not different from Iraq and Afghanistan," says Mr. Johnsen of Princeton University in New Jersey, who adds that AQAP can recruit militants from outside Yemen as well. "They are able to make the argument that Yemen is a legitimate front for jihad… They've been making that argument since 2007, but incidents like this are all sort of fodder for their argument."

If you drop cluster bombs in a country and slaughter dozens of women and children with drones and then kill a popular governor, you're going to spawn pervasive amounts of anger and hostility towards the responsible foreign country and also embolden the message of extremists that they are under attack from the U.S and jihad is thus warranted: a shocking observation, I know -- but readers of the LA Times, or at least this article on the supposed emerging threat, would have no idea that the U.S. has even been doing that in Yemen.

That the U.S. is creating the very Terrorism problem it claims to be combating is one of the most crucial points in discussions of American Terrorism policy -- it was one explicitly recognized even by a Rumsfeld-created Terrorism task force back in 2004 -- but it barely is heard in American political discourse.  Further bolstering that fact is the work of Noor Berham, who has spent three years systematically documenting the results of American drone attacks in Pakistan with on-the-scene photojournalism:

Noor Behram says his painstaking work has uncovered an important -- and unreported -- truth about the US drone campaign in Pakistan's tribal region: that far more civilians are being injured or dying than the Americans and Pakistanis admit. . . .

According to Noor Behram, the strikes not only kill the innocent but injure untold numbers and radicalise the population. "There are just pieces of flesh lying around after a strike. You can't find bodies. So the locals pick up the flesh and curse America. They say that America is killing us inside our own country, inside our own homes, and only because we are Muslims.

"The youth in the area surrounding a strike gets crazed. Hatred builds up inside those who have seen a drone attack. The Americans think it is working, but the damage they're doing is far greater."

Even when the drones hit the right compound, the force of the blast is such that neighbours' houses, often made of baked mud, are also demolished, crushing those inside, said Noor Behram. One of the photographs shows a tangle of debris he said were the remains of five houses blitzed together.

Because this kind of reporting is so dangerous, most media outlets rely on the claims of American and Pakistani officials and thus dutifully print their allegations about the number of "militants" killed by the strike.  Berham, however, insists that those claims are deceitful in what they omit, and that the U.S. is doing far more harm than good with these drone attacks in terms of its stated goal (eliminating Terrorism).  Further evidence for that fact is supplied by Harper's Index for May, 2011, which notes:

Number of those who appeared on a U.S. list of most-wanted terrorists : 2

American media reports such as the one appearing this weekend in the LA Times reflexively depict escalating American military attacks as a response to the growing Terrorist threat rather than as what they are: a leading cause of that threat.  One might also take cognizance of the obvious connection between these escalating attacks under Obama and the plummeting of U.S. public standing in the Arab and Muslim world.

Independently, note this amazing passage from that LA Times article, regarding how these anonymous officials learned of what they are claiming concerning an AQAP/Shabab grand alliance:

The CIA gained other information when Somali authorities allowed them to interview Shabab militants imprisoned in Mogadishu, the Somali capital, U.S. officials said. The CIA asked about the militants' ability to launch attacks outside Somalia as well as the group's command structure.

That claim presumably refers to the secret Mogadishu prison Scahill revealed, the one the CIA pays Somali agents to guard and at which they're constantly present.  The notion that Somali authorities generously "allowed" the CIA to "interview" prisoners there mindlessly disseminates CIA propaganda and ignores the facts Scahill revealed: that this is effectively a U.S.-maintained-and-engineered prison.  And, of course, there is no discussion of the legal and human rights repercussions of interrogating prisoners in secret facilities beyond the reach of human rights monitoring agencies, nor any discussion of the role such practices play in further spawning anti-American sentiment.

Just behold how little has changed in political and media circles when it comes to the War on Terror.  The propaganda and policy tactics are virtually identical; only the names and places change.  So we have anonymous officials continuously hyping the New Terrorist threat and the New Terrorist Masterminds, reporters who do nothing but uncritically pass it all along, civilian slaughter and secret prisons and interrogations simply transferred to the new Battlegrounds, and all new pretexts for not only continuing, but escalating, the War on Terror under a new brand name.  The War on Terror is the ultimate self-perpetuating industry: it endlessly spawns its own justification.