Claims by Obama officials about civilian deaths in Pakistan are, put simply, false and misleading 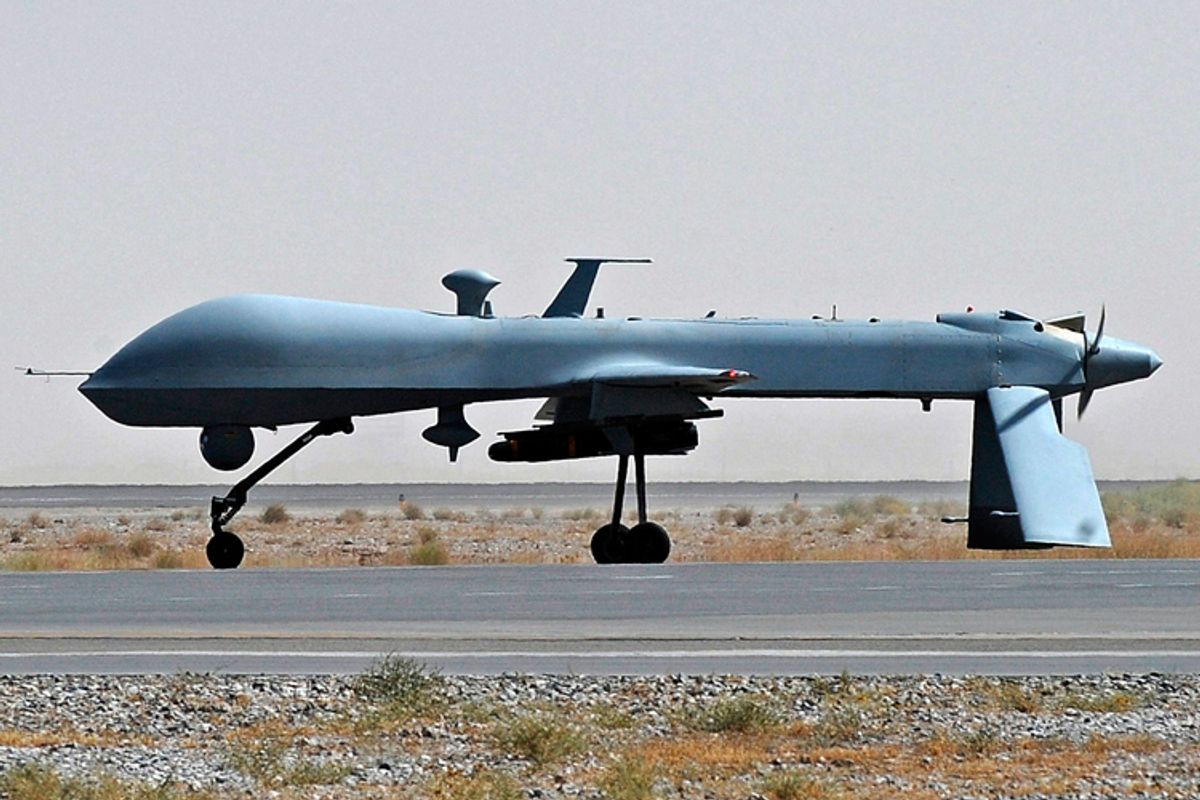 A U.S. Predator unmanned drone armed with a missile
--

In late June, President Obama's chief Terrorism adviser, John Brennan, made an extraordinary claim about drone attacks in Pakistan: "in the last year, 'there hasn't been a single collateral death because of the exceptional proficiency, precision of the capabilities that we've been able to develop."  He added: "if there are terrorists who are within an area where there are women and children or others, you know, we do not take such action that might put those innocent men, women and children in danger."  The London-based Bureau of Investigative Journalism had heard similar claims from Obama officials over the past several months, and thus set out to examine the relevant evidence to determine if those claims are true.

Last night, they issued the findings of their study which, simply put, definitively establish that the administration's claim about civilian deaths is patently false.  Contrary to Brennan's public assertions, "a detailed examination by the Bureau of 116 CIA 'secret' drone strikes in Pakistan since August 2010 has uncovered at least 10 individual attacks in which 45 or more civilians appear to have died."  That count -- which includes numerous children -- covers only the civilian deaths which the Bureau could definitively establish by identifying the victims by name.  Given how conservative their methodology was, these findings almost certainly under-count, probably dramatically, the number of civilian deaths at U.S. hands during the period about which Brennan made his claim: "at least 15 additional strikes warrant urgent investigation, with many more civilian deaths possible."

Other data similarly establish how false and misleading are Brennan's claims.  A British photojournalist providing on-the-scene reporting of the aftermath of drone strikes in Waziristan documented this week that "far more civilians are being injured or dying than the Americans and Pakistanis admit" and "for every 10 to 15 people killed, maybe they get one militant."  To describe Brennan's claims as merely "inaccurate" or "untrue" is to be unduly generous.

My guest on Salon Radio today is Chris Woods, who led the Bureau's investigation into Brennan's claims.  The 15-minute discussion can be heard by clicking PLAY on the player below.  Woods explains why it is so pernicious to allow false claims about drone attacks like the one Brennan issued to go unchallenged.  Most remarkably, he explains that even once the Bureau presented the evidence they compiled to the Obama administration, Obama officials continued to insist that Brennan's claims were true, telling the Bureau: "the most accurate information on counter-terror operations resides with the United States."

But as the ACLU today notes regarding the Bureau's study, the Most Transparent Administration Ever™ refuses to honor the ACLU's FOIA requests for information about drone attacks:

Indeed, it is absurd that senior government officials would claim that there have been no civilian casualties in drone strikes in Pakistan, and at the same time refuse to confirm or deny the existence of civilian casualty data in response to the ACLU's Freedom of Information Act request. This kind of selective disclosure not only deprives the public of basic information about the human cost of the government's actions, but it also undermines the credibility of the government's statements. . . .

The public debate on drone strikes is severely hobbled by the government's failure to provide basic information not just about the number of innocent civilians killed, but also about the legal criteria that its uses in conducting targeted drone killings, and the internal accountability measures that are in place to ensure that strikes -- especially those conducted by the CIA -- comply with the law.

In light of this new finding, it's not hard to see what accounts for this refusal to engage in basic disclosure.  Secrecy is not only the linchpin for abuses of power, but it also enables the government to issue misleading propaganda in an unchallenged manner.  As drone attacks become an increasingly prominent tool in the American war arsenal, it's more vital than ever that government deceit about these attacks not be tolerated.  The discussion with Woods can be heard here:

To his credit, Joe Scarborough interviewed Jeremy Scahill this morning on Morning Joe regarding Obama's use of a secret prison in Somalia, his escalating drone attacks, and the reaction of Democrats to all of this.  It's well worth watching:

UPDATE:  The transcript of the interview with Chris Woods is available here.