Films we'll never see, from "Greed" to "Gatsby" to Jerry Lewis at the Holocaust 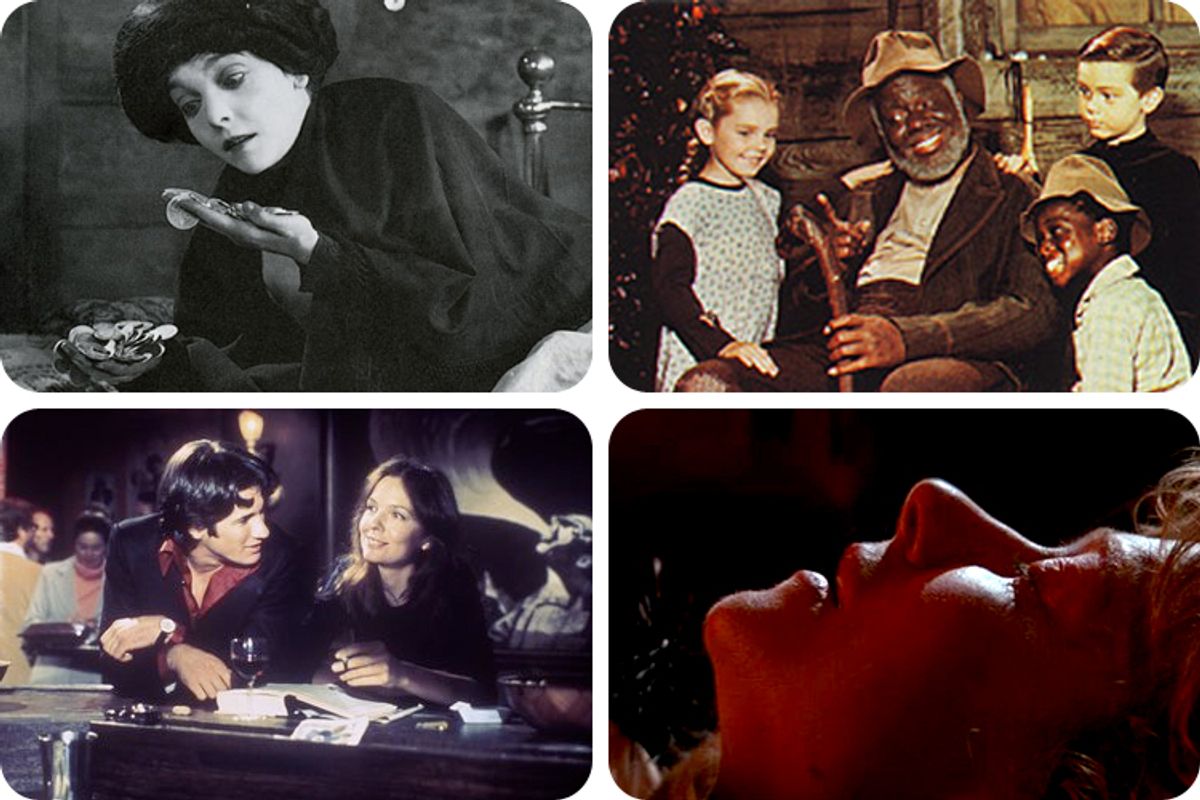 Clockwise from top left: "Greed"; "Song of the South"; "The Cook, the Thief, His Wife and Her Lover"; "Looking for Mr. Goodbar"
--

[UPDATED below.] With the newly restored 35mm version of the late German filmmaker Rainer Werner Fassbinder's long-unavailable 1973 science-fiction epic "World on a Wire" -- which opens this week in New York before a national roll-out courtesy of Janus Films -- the number of missing movies has shrunk by one. This happens all the time, of course; filmgoers and home-video customers are deluged with more rediscoveries and restorations than we can process, and as soon as I publish this list it will become outdated. (Here's what I can see from my desk in various piles: Newly restored versions of Fritz Lang's "Metropolis," Sergei Eisenstein's "Battleship Potemkin" and Buster Keaton's "Our Hospitality," along with new-to-video titles such as Margot Benacerraf's "Araya," Jules Dassin's "The Law," Joseph Losey's "The Romantic Englishwoman" and John Huston's "The African Queen.")

In our age of information glut, it may seem surprising that anything ever vanishes. Yet the number of films that either can't be seen at all or can't be found without considerable difficulty (and extra-legal Internet spelunking) remains impressive, even when you bracket the fact that the vast majority of films made in the silent era no longer exist, including perhaps 95 percent of those made before 1920. (Or odd national tragedies, such as the reported fact that most of Malaysian cinema has been destroyed.)

An important precursor to "The Matrix" in the dystopian tradition and a near-classic of the 1970s European design aesthetic that Fassbinder imbibed so thoroughly, "World on a Wire" deserves consideration on its own terms. I'll try to get to that, but I can't resist a brief treatment of the "missing movies" question, since many of you may want to nominate your own favorites. I'm deliberately casting a wide net here, in the sense that some of these movies are well and truly missing (in that it's unlikely anyone will ever see them again), others are unavailable on home video because of copyright disputes or other business issues, some exist in a butchered form disavowed by their creators, and some can't be seen because those who own them simply don't want you to see them. To cite a movie I didn't include here but could have, if you have an all-region DVD player and are willing to spring for Amazon's shipping charges from Europe, you can watch Nicholas Ray's "Johnny Guitar" with no problem. But it remains a curious fact that such a famous American western remains legally unavailable in its home country.

I tried to craft a top-10 list by drawing from all of the above categories, and to find entries that won't immediately be addressed by streaming video or Amazon's willingness to print DVDs to order. I originally meant to include Douglas Sirk's "The Tarnished Angels" and Joseph Strick's 1967 film version of James Joyce's "Ulysses," both longtime favorites of this kind of list. Nope -- in the last year both have become available, the former as an on-demand DVD, the second as a streaming rental. What movies do you dream of seeing that can't be found for love or money?

Greed (Erich von Stroheim, 1924) Before you write that email telling me that you saw this most famous of all "lost films" on Turner Classic Movies, hang on a minute. In the late '90s, Turner Entertainment, as the copyright holder on what was left of this epic adaptation of Frank Norris' frontier novel "McTeague," undertook a controversial restoration that used still photos and archival materials to reach a rough approximation of von Stroheim's four-hour cut. But only about two and a half hours of von Stroheim's actual footage remain -- and, after all, his four-hour version was a compromise of a compromise, hacked down from a nine-hour director's cut (and then a six-hour intermediate version) that the Goldwyn version refused to release. Shot on location in San Francisco, the Sierra Nevada mountains and the desert of Death Valley on a then-immense $500,000 budget, "Greed" as it exists is still a classic of the silent era. But in its unseeable immensity, it plays a larger role as the first "film folly" (to borrow the critic Stuart Klawans' phrase) in Hollywood history.

The Mountain Eagle (Alfred Hitchcock, 1927) In conversations with François Truffaut much later in his life, Hitchcock said he was glad that no prints of his second film -- a silent melodrama, set in Kentucky but shot in Austria (!) -- had apparently survived. But given that this is the only one of the Master's films that was lost to posterity, it's safe to say his legions of admirers don't agree. In fact, some contemporary viewers reportedly found "The Mountain Eagle" superior to "The Lodger," Hitchcock's first hit. All that's left of this 57-minute feature are some still photos, although the British Film Institute last year announced a renewed hunt.

The Great Gatsby (Herbert Brenon, 1926) Admittedly, the surviving trailer for this Paramount Pictures instant adaptation of F. Scott Fitzgerald's classic novel -- the first of three (and soon to be four) Hollywood versions -- makes it look like a stiff, stagey, utterly run-of-the-mill mid-'20s silent. Brenon was a studio director with no particular renown and the cast consists of actors whose names mean little to us today: Warner Baxter as Gatsby! Lois Wilson as Daisy! But this "Gatsby," which has been eagerly sought by film historians for decades, remains a cautionary example of how easily pop-culture ephemera can disappear.

The Magnificent Ambersons (Orson Welles, 1942) Welles' second feature after his history-changing "Citizen Kane," this adaptation of Booth Tarkington's classic American-family novel remains one of the greatest films of its era, even in a final version that Welles renounced. As we know from the history of "director's cuts," sometimes the studio is actually right, and Robert Wise (who helped craft the final version of "Ambersons" once RKO wrested it from Welles) always insisted that Welles' lost version, which was about 40 minutes longer and had a far more downbeat ending, was no improvement on the one you can watch today. Thing is, we'll probably never know.

Song of the South (Harve Foster and Wilfred Jackson, 1946) This Disney mixture of live action, animation and highly uncomfortable race relations definitely exists, and if you've got $150 or so burning a hole in your pocket, you can buy it on VHS tape. Sooner or later, you'd have to think the corporate suits in Mouseland will find the right context for a collector's edition DVD: Essays by Henry Louis Gates and Cornel West? Earnest panel discussions on the Jim Crow era and the depiction of African-Americans in Hollywood? I've never seen "Song of the South" in its entirety and I'm sure it's got many cringe-worthy moments, but can anyone possibly deny its cultural and historical importance?

Looking for Mr. Goodbar (Richard Brooks, 1977) Diane Keaton goes looking for sex in the Manhattan night and winds up finding a sinister Richard Gere (memorably seen doing pushups in nothing but a jockstrap). As a depiction of decrepit 1970s New York, "Mr. Goodbar" rivals "Taxi Driver," and as a startlingly frank depiction of female sexuality and the singles scene, it apparently remains too hot a property for Paramount Pictures. The movie made a lot of money, but Keaton and Gere were passed over at Oscar time (although Tuesday Weld received a supporting nomination), and writer-director Brooks made only two more films. It's been out of print on VHS for many years and has never appeared on DVD or Blu-ray.

Let It Be (Michael Lindsay-Hogg, 1970) Even with only two members of the Beatles still living, this made-for-TV documentary about the recording of the Fab Four's final album -- featuring their last public performance, on the Apple Records rooftop in London -- remains a casualty of the rifts that blew the band apart. Yes, Paul McCartney and Yoko Ono have buried the hatchet on almost all the legal issues that once divided them, leading to extensive rereleases of the Beatles' musical catalog. But plans to remaster and rerelease "Let It Be," which hasn't been available since a poor-quality video release in the early 1980s, have apparently been shelved, reportedly because the film and its outtakes are still seen as raising too many "old issues."

The Cook, the Thief, His Wife and Her Lover (Peter Greenaway, 1989) It's not all that startling that some of British arch-formalist Greenaway's admittedly misanthropic films aren't available on Region 1 home video. But this sexual, scatological and violent black comedy, starring Helen Mirren and Michael Gambon, was actually a pretty big art-house hit, partly because the MPAA slapped it with an X rating (which distributor Miramax defied, releasing the film unrated). The ensuing controversy led to the creation of today's NC-17 rating, which of course is no improvement.

UPDATE: Several readers have alerted me that "Cook, Thief," although still not for sale on DVD or Blu-ray in the U.S., is available for streaming on both Netflix and Hulu. Just goes to show you how fast this stuff changes. Greenaway's "Drowning by Numbers" appears to be still unavailable, while more obscure (and equally grotesque) titles like "The Baby of Macon" and "A Zed & Two Noughts" are easily findable.

Catch My Soul (1974, Patrick McGoohan) British TV icon McGoohan, former star of "The Prisoner," has directed only one movie, and apparently he'd rather forget it. Folk musician Richie Havens, then famous for his Woodstock appearance, played a New Mexico cult leader in this updated rock-musical version of Shakespeare's "Othello," which according to McGoohan was re-edited by its fanatical Catholic producer before release. After failing as an art-house release, "Catch My Soul" was then re-edited again, retitled "Santa Fe Satan," and released as a drive-in movie. The soundtrack, recorded by Havens, Delaney Bramlett, Tony Joe White and others, had its fans, but the movie didn't. Tragically (except to McGoohan), no prints of either cut are known to exist.

The Day the Clown Cried (Jerry Lewis, 1972) Arguably the most famous almost-finished and occasionally-seen movie in Hollywood history, Jerry Lewis' notorious Auschwitz dramedy pops up on entertainment journalists' radars every once in a while, as when a couple of similarly themed movies ("Life Is Beautiful" and "Jakob the Liar") were released in the late '90s. In his 1985 autobiography, Lewis swore he would one day finish the film, in which he plays a concentration-camp clown charged with amusing children on their way to the gas chamber. To put it mildly, that seems unlikely. Lewis supposedly has the only copy of the film locked in his personal safe, but there are rumored to be other samizdat versions in circulation. In 1992, comedian Harry Shearer reported that he had seen it, and compared it to "a painting on black velvet of Auschwitz ... It's not funny, and it's not good, and somebody's trying too hard in the wrong direction to convey this strongly-held feeling."