"Captain America": A patriotic surprise from the comic-book past 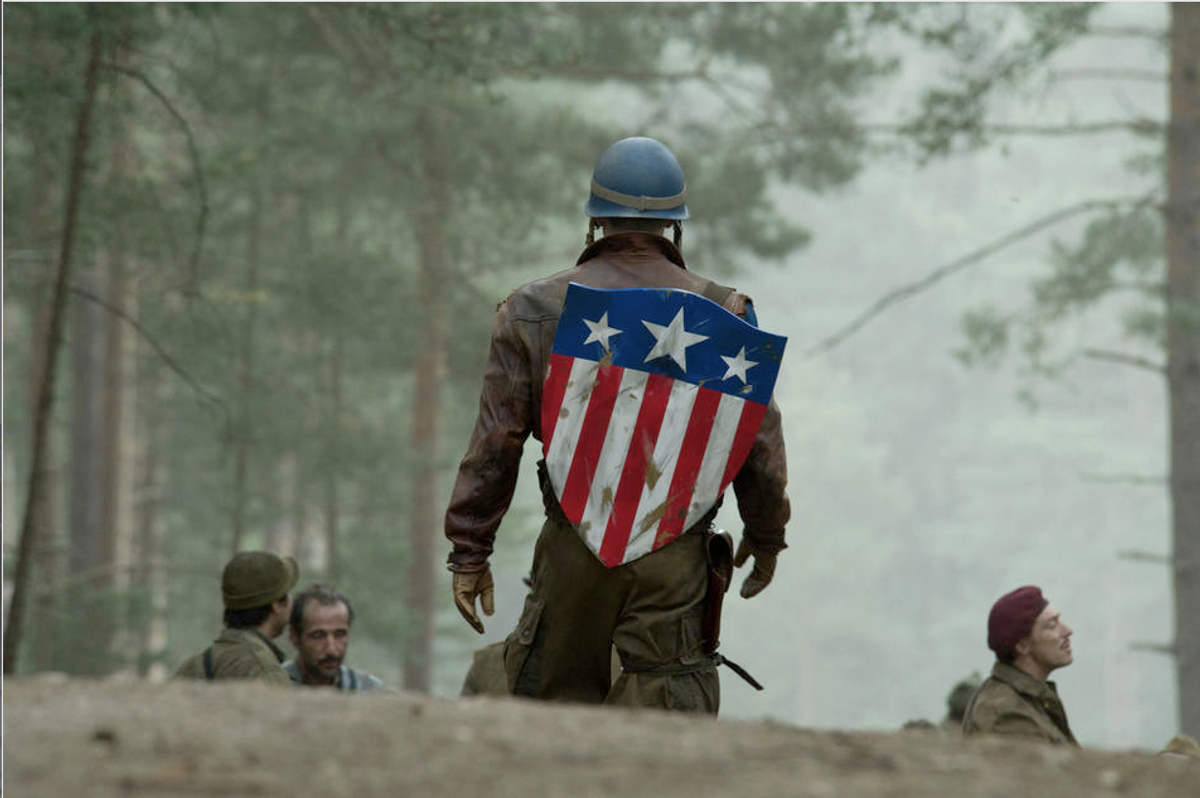 Maybe we've just reached the midpoint of a sweltering summer, when Popsicles start to seem like the apex of the culinary arts. Maybe I've been beaten down to bargain-basement expectations by a season of relentless superhero-action spectacles. Maybe I passed out after the air conditioning failed during the New York press screening of "Captain America: The First Avenger," and what I'm remembering is just the collective hallucination of a bunch of movie geeks locked in a 90-degree sweat box on 42nd Street. Be that as it may, "Captain America" is exactly what the third week of July needed: a curiously fun, surprisingly imaginative and unashamedly old-fashioned yarn of skulduggery and adventure.

Let me come clean here and now as someone with severely limited interest in the Marvel Comics universe, and even less patience for the lumbering pace of the current Marvel-Paramount movie series, which has been building since at least the 2008 "Iron Man" toward next year's big "Avengers" reunion and beyond. Somehow we must now get through the rest of summer and fall and winter and the return of spring without any more Marvel Comics movies, and when lilacs next in the dooryard bloom (not that we'll be paying attention), those of us who survive will find out what Joss Whedon can wrangle out of Robert Downey Jr.'s Iron Man, Chris Hemsworth's Thor, Samuel L. Jackson's Nick Fury, et al. Let's not even discuss the fact that the franchise is plotted out at least as far as a Fury film set for 2014, and in all likelihood much further than that.

So that was the attitude with which I approached Joe Johnston's "Captain America," and the character has long struck me as one of Marvel's least interesting creations, a straitlaced and jingoistic super-soldier so lacking in dark side or human dimensions as to make Superman look like a Eugene O'Neill protagonist. But director Johnston and his screenwriters, Christopher Markus and Stephen McFeely, use the vintage squareness of the original Captain America comics to their advantage, nimbly walking the fine line between period spoof and patriotic celebration.

Chris Evans, a 30-year-old actor getting his first major starring role, proves irresistibly likable as weedy Brooklynite Steve Rogers, who keeps being rejected by the Army before he is re-engineered as an unstoppable human weapon, one who never loses his instinctive sympathy for puppies, children and the wretched of the earth. Evans is matched, or more than matched, by Hugo Weaving as the nefarious German mastermind Johann Schmidt, better known to comics fans as Red Skull. Schmidt has injected himself with some of the same goo that transformed Rogers, but perhaps because of his innate Germanness, has become so power-mad and evil that he views Hitler as a pantywaist lightweight who must be supplanted. Weaving should play every villain in every movie that has one, frankly. He has to deliver hopelessly shticky dialogue while wearing a ludicrous red rubber mask, and is simultaneously scary and hilarious.

If you start taking "Captain America" seriously on any level, it becomes way too troubling way too fast -- let's fight the Nazis' experiments in eugenics with our own, all-American version! -- and this movie wisely avoids any of that. This is a fast-moving, atmospheric action-adventure, with clearly delineated heroes and villains and comic supporting characters, and almost all of it is set between 1942 and 1945, when most of us can agree that historical ambiguity wasn't much in evidence. There are also prologue and epilogue sequences set in the present, about which I should say little, except that the first evokes the eerie mood of "Alien" and "The Thing," and the second of course involves Jackson's Nick Fury. (There was no post-credits scene, aka "stinger," on the print shown to the press, although rumors suggest there may be one on the public version that opens Friday. Since you're dying to know.)

Johnston presumably got this assignment because of his success doing vintage Americana in "The Rocketeer" and "October Sky," the two best films of his 22-year career as a Hollywood journeyman. He has a meticulous eye for period detail, and while the 1940s New York backdrops in early sequences of "Captain America" are obviously fake -- a combination of old-fashioned Hollywood sets and CGI -- that's entirely consistent with the movie's ethos. Just as important, Markus and McFeely's screenplay views the World War II era from a wry but affectionate distance. After the experimental serum developed by Howard Stark (Dominic Cooper), the future father of Iron Man, turns Steve into Captain America, he is first employed as a propaganda weapon, not a military one. Clad in an embarrassing woolen costume, he goes on tour with a troupe of leggy chorus girls to sell war bonds, stars in short-subject adventure movies and becomes (yes!) a hero in comic books sent to actual soldiers on the front lines.

But fiery English secret-agent bombshell Peggy Carter (played by Hayley Atwell, a British TV star and Hollywood newcomer) believes in him, and so, more grudgingly, does Col. Phillips, the latest in a long line of Tommy Lee Jones irritable-grumpus authority figures. Once Captain America decides to shed the dancing girls and take the fight to Red Skull's Hydra organization -- who evidently find the Nazis insufficiently wicked, in all senses of the word -- this movie turns into the kind of action-adventure you've seen dozens of times, in which a small, plucky and implausibly diverse band of brothers takes on a vastly superior force apparently hand-picked from Darth Vader's Galactic Academy of Sinister Ineptitude.

That's more than a gag, actually. For better and worse (but mostly better), Johnston draws on all kinds of pulpy adventure movies here, most obviously "Star Wars" and "Raiders of the Lost Ark." "Captain America" has the brisk, chaste manner of a preteen-oriented action flick of yesteryear -- Steve Rogers and Agent Carter barely even smooch -- combined with all the cutting-edge digital effects contemporary audiences expect, and the result is oddly satisfying. Special credit goes to cinematographer Shelly Johnson and production designer Rick Heinrichs for creating the film's witty and internally consistent visual mood. You can tell Red Skull's über-Nazi machinery from Howard Stark's American-century gizmos just in terms of design aesthetic: On the one hand, brooding, neo-Gothic contraptions that would look at home in Dr. Frankenstein's lab; on the other, sleek, modernist lines and cool colors that look forward to Cadillacs and Hoover vacuum cleaners yet to come.

Is Captain America, as some have suggested, a symbol of American proto-fascism or a Tea Party hero before the fact? One answer to that question is to say that it's a stupid question to ask about a comic-book hero and another, given the overall left-libertarian leanings of the Marvel universe, is to say no. I'm not sure either answer is adequate in the long run, but this origin story effectively ducks the question, by pointing out that Captain America was a weapon created in a moment of global emergency. He's unquestionably an argument for American exceptionalism, in that he seems cooler, more humble, more self-sacrificing and just flat-out nicer than those who sought to enslave the world. That's an important aspect of our national mythology, and "Captain America" is a nostalgic tribute to the time when it still felt true.