Cenk Uygur and the ethos of corporate-owned media 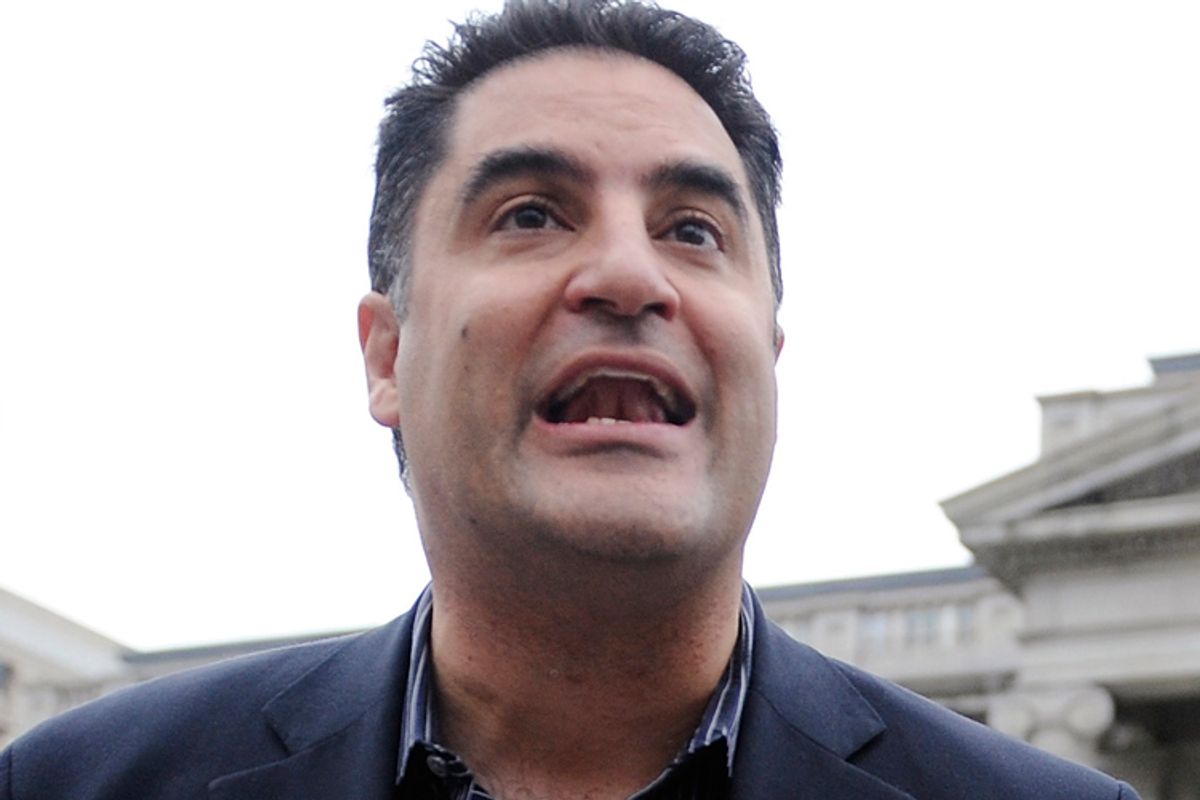 Before being named six months ago as interim host of MSNBC's 6:00 p.m. program, Cenk Uygur blogged at liberal sites, hosted a popular Internet and radio show aimed at a young audience (The Young Turks), and had a regular segment on Dylan Ratigan's MSNBC show called "The Daily Rant."  As one might expect, his style was combative, irreverent, and even at times angry, and he was often highly critical of both political parties and President Obama (though his anger at Democrats was typically due to what he perceived as excessive capitulation to the GOP).  Last night, despite what The New York Times called "solid" (but not "stand-out") ratings, it was announced that MSNBC was replacing Uygur with Rev. Al Sharpton; Uygur -- in a 17-minute YouTube segment on his Young Turks show (posted below) -- then announced that he had rejected MSNBC's apparently lucrative offer to stay on in various other roles and explained what happened and why.

Although the NYT somewhat sensationalistically hyped the innuendo that the White House had complained about Uygur to MSNBC, there's no evidence that that's true; for multiple reasons, I seriously doubt that's true and I don't think Uygur is claiming there is evidence for it (though it's hardly unheard of for White Houses in general, and this one in particular, to complain to networks about criticisms of the President).   Moreover, there are obvious factors that would cause MSNBC to make this move that have nothing to do with Uygur, including the growing criticisms the network faced over its blatant lack of diversity in its prime-time line-up and the fact that Sharpton is a highly recognizable celebrity -- a "star" in TV parlance -- who can single-handedly generate substantial media attention (unlike Uygur, Sharpton has also been a vocal and steadfast defender of President Obama from critics such as Cornel West).  Nonetheless, there are revealing aspects to Uygur's removal worth examining.

As The New York Times notes, "MSNBC is home to many hosts who criticize President Obama and other Democrats from a progressive point of view, but at times Mr. Uygur could be especially harsh."  Uygur added:  "I am by far the hardest on the Obama administration" at the network (though, as Uygur subsequently noted, MSNBC's afternoon host Ratigan is likely as hard on Obama, but prime-time shows are more visible).  But it isn't the quantity or even intensity of his criticism that distinguished him, but rather the style in which he expressed it.

Uygur often refused to treat members of the political and media establishment with deference and respect.  He didn't politely imply with disguised subtleties when he thought a politician or media figure was lying or corrupt, but instead said it outright.  In interviews, he was sometimes unusually aggressive with leading Washington figures, subjecting them to civil though hostile treatment to which they were plainly unaccustomed.  As Uygur put it in explaining last night why he rejected MSNBC's offer to stay on:

Uygur explained that, several months ago, he was summoned to a meeting with MSNBC boss Phil Griffin and told that while it is fun and enjoyable to be an "outsider," that is not what MSNBC is for.  Instead, Griffin told him, MSNBC is "part of the establishment," and Uygur must conduct himself in accordance with that reality.  It's perfectly fine in establishment discourse to express contempt for one of the two political parties.  It's equally fine to periodically criticize your own.  But what is most assuredly not fine -- particularly in a high-profile nighttime spot and without having a real power base that comes from mammoth ratings -- is to be aggressively adversarial to the political establishment itself and the financial interests that fund, own and control that political system.  That is what Uygur was, and while there's no evidence that this was the primary cause of his removal, it was clearly a serious source of dissatisfaction with the station's executives, including MSNBC's chief.

Last week, Rachel Maddow interviewed Bill Moyers, who for years -- based on experience -- has been explaining that the corporate climate that preveails at large media companies significantly restricts and constrains what can be said.  In response, Maddow said:

I mean, I work at a big corporate conglomerate controlled media outlet. And I feel like the way to handle this as an individual journalist for me is that I have carved out a sphere here of editorial independence.

And on MSNBC, my deal with the company is I will do shows on MSNBC, and you will not tell me what to say. And they are very comfortable with that. And I think a lot of individual journalists find ways to do that.

I have zero doubt that what Maddow said there is 100% accurate.  I am quite sure that no executives at MSNBC ever told her what to say or what she could not say; given her status as MSNBC's top-rated host, I doubt any executives would do so or that she would tolerate such dictates (indeed, Ugyur himself said he never received any such express decrees).  Outside of Fox News -- which, unlike MSNBC (which, after all, puts Joe Scarborough on the air for three hours a day), is an overt partisan propaganda outlet where such content dictates are common -- that sort of direct censorship order is not how content is restricted at these corporations (though there are documented cases, including at the Bush-era MSNBC, were such explicit political censorship absolutely occurred; see here for examples).  Rather, as Moyers explained in the Maddow interview, a form of self-censorship arises based on knowledge of what the corporate culture will and will not tolerate:

MOYERS: I served time at CBS News, enjoyed it, seven years in all. I was here at MSNBC for the launch of it 15 years ago. I worked at NBC.

But I saw in every one of those environments the growth of the shadow of self censorship when -- I mean, I happen to know that when I was here, Newt Gingrich and Henry Kissinger did their best to mute my influence on "The Nightly News" because of the freedom and independence Andy Lack, who was then the president of NBC News, had given me. It's up there all the time, like gathering storm clouds.

You do a terrific job of maintaining your independence. And I must say out of the Murdoch scandal has come a reminder of the importance of a free and independent press.

MOYERS: -- a public trust, set up by the founding family to make sure that "The Guardian" would always be commercially and editorially independent.

Wouldn't you have liked to have been in the editorial room at "The Guardian," when they decide -- they knew what they had -- they had the evidence, they would not have gone this way if they had not had the evidence. And they knew they were taking on the most powerful media baron in the world, the Berlusconi of England and the United States, but they did it because they were independent.

We have been reminded that in the end, democracy depends upon maybe even just a few independent voices, free of any party or commercial allegiance.

Nobody succeeds at a large corporation without understanding and accommodating the prevailing ethos and the interests of that corporation as perceived by one's bosses.  As Uygur explains, the more important someone becomes to the success of a corporation (as Maddow has), the more flexibility they have to depart from, even violate, some of the unstated rules, but no corporate employee -- including media stars -- will last long if they step too far out (News Corp. even rid itself of Glenn Beck despite declining-though-still-impressive-for-his-time-slot ratings; there were multiple factors, including a successful advertiser boycott, but clearly one factor was that he had departed so far from the standard two-party-system discourse, and had become so adversarial to the establishment itself, that, despite those ratings, it was no longer consistent with News Corp.'s interests to keep him on the air).

This isn't to say that every journalist working for a large media corporation engages in self-censorship.  Some are able to construct real editorial independence, while others -- soul-less careerists and the like -- just don't have much of an inclination to be truly adversarial to the political and financial establishment.  But as Uygur's stories make clear, MSNBC very much considers itself "part of the establishment" and demands that its on-air personalities reflect that status.  With some exceptions, MSNBC largely fits comfortably in the standard, daily Republicans v. Democrats theatrical conflicts, usually from the perspective that the former is bad and the latter are good.  It's liberal -- certainly more liberal than other establishment media outlets have been in the past -- but it's establishment liberalism, and that's allowed.  It's wandering too far afield from that framework, being too hostile to the system of political and financial power itself, that is frowned upon.

Uygur's explanation for what happened and why he turned down MSNBC's offer -- including the means used to lure people into that system -- is well worth watching (see the video below).  It sheds substantial light on the subtle though clear pressures applied at these media outlets.

On an unrelated note, I have an Op-Ed in the Guardian today on Obama, his efforts to cut Social Security, and the American left.

UPDATE:  I should also note that while explicit content censorship is not the typical means of constraining what can be said at these media outlets, it does sometimes occur.  In addition to the link to the multiple examples I supplied above, recall how GE and MSNBC executives forced Keith Olbermann to cease criticizing Fox News personalities as part of a pact GE and News Corp. entered into in order to safeguard their non-media interests.