Do shows like "16 & Pregnant" seek out troubled kids, or does the spotlight itself turn them into little monsters? 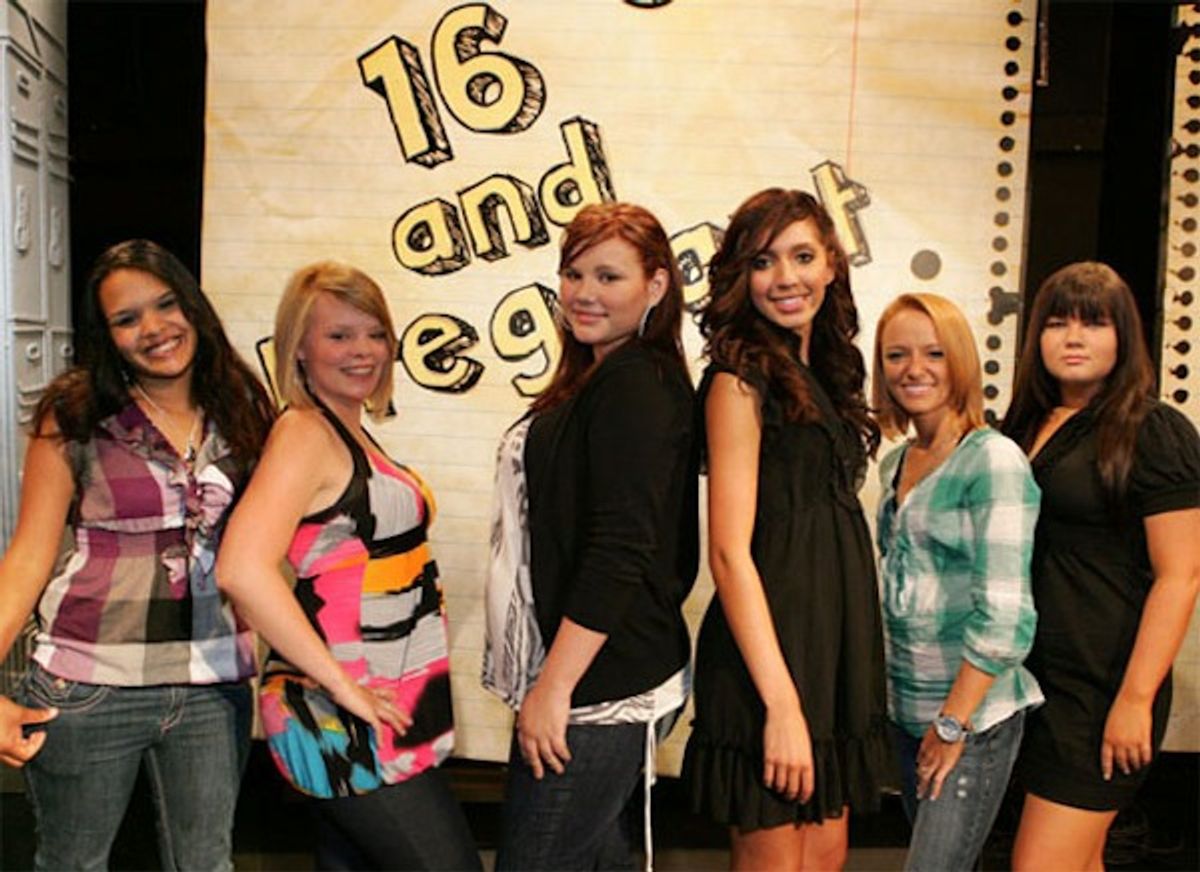 How many of these pregnant high schoolers will end up with a rap sheet?
--

Whether or not you think shows like MTV's "16 & Pregnant" and "Teen Mom" glamorize babies having babies, or serve as a somber educational warning to today's youngsters, the reality is that the show's audiences will always look better in comparison to the stars. In fact, signing on for "Pregnant" or "Teen Mom" may as well come with a warrant for the arrest of you, your parents or your boyfriend. But were these kids getting in trouble with the law before MTV started filming? Or has being held up as such a negative stereotype of teen parenting caused the teens and their families to go off the deep end?

Today, for example, "Teen Mom 2" star Jenelle Evans was found in violation of her probation when she tested positive for THC. The 19-year-old had just finished a rehab program to help with her upcoming court case against charges of breaking and entering and drug possession with her boyfriend Kieffer Delp. (And to a lesser extent, beating the crap out of her friend and co-star Britany Truett.) Jenelle's mother has taken custody of her grandson, Jace. Then there's "16 & Pregnant's" Aubrey Akerill, who was caught with prescription drugs not in her name when picked up on shoplifting charges.

Yet these problems seem almost quaint when compared to those of Amber Portwood, the "Teen Mom" linchpin who was charged with assault and sent to jail after attacking baby-daddy Gary Shirley on camera. Since then, Amber has attempted suicide and entered rehab after allegations of prescription drug abuse surfaced.

Yet Amber is also the most financially successful of the kids, having stated in court that she made $140,000 per season of "Teen Mom," and generating side income from her frequent tabloid exclusives. Being held up to the world as an example of a bad mom sure seems to pay off. What kind of example does that set?

As a counter-example, the surprisingly sane teen couple Catelynn Lowell and Tyler Baltierra -- who decided to put their baby up for adoption -- probably made the smart choice. After all, Tyler's father, Butch, has been in and out of jail for his son's entire life and also happens to be married to Catelynn's mom, April ... making Catelynn and Tyler step-siblings. Butch's litany of arrests includes several breaking and entering attempts, larceny and home invasion.

The couple's decision to stay in the "Teen Mom" spotlight after "16 & Pregnant" allowed them to break free of their terrible parents, says Lilit Marcus, editor of TheGloss.com (and expert on all things "Teen Mom"-related):

"Catelynn and Tyler needed to break the cycle of poverty, and their MTV money means they don't have to live with their drug-addict parents anymore. The kids on "16 & Pregnant" actually get paid very little ... some of the girls have said they were given cribs and other items for the baby in lieu of being paid. But if you get on "Teen Mom," you get paid a lot more. If you look at the difference between seasons 1 and 2 of the show, you'll notice (Catelynn and Tyler) don't have after school jobs, and yet can suddenly afford their own apartments."

Jezebel has also set up a college fund for the couple, and the duo makes money from speaking engagements. So maybe Catelynn and Tyler are the exception, not the rule.

But back to the question at hand: Does being on these teen parent shows encourage bad behavior by having it pay off, like Portwood's did? Or does MTV pick kids who have a history with the law?

There's no definitive way to know. Since most of these kids are juveniles, their records are sealed. But these women are often surrounded by violence and abuse: Whitney Purvis from the original "16 and Pregnant" had to deal not only with a newborn, but with a mother whose rap sheet includes charges of felony meth and marijuana possession. Farrah Abraham's mom hit and choked her teen daughter off-camera and was arrested. The fathers of show stars Kailyn Lowry, Chelsea Houska, and Christinna Robinson's children all have their fair share of mug shots among them, as well.

Perhaps most disturbingly, "16 & Pregnant" new additions Jamie McKay and boyfriend Ryan McElrath have been arrested four times in the past year, without any help from MTV.

If nothing else, it's clear that the teens chosen for the shows are picked because of their volatile relationships (with the except of Catelynn and Tyler, whose icky step-sibling status might have given them a free pass). It's clear that MTV casts on the hope that these kids will continue to fight, do drugs and steal. It makes for great television -- and draws a not-so-subtle picture for the audience that the lives of teenage parents isn't very pretty.