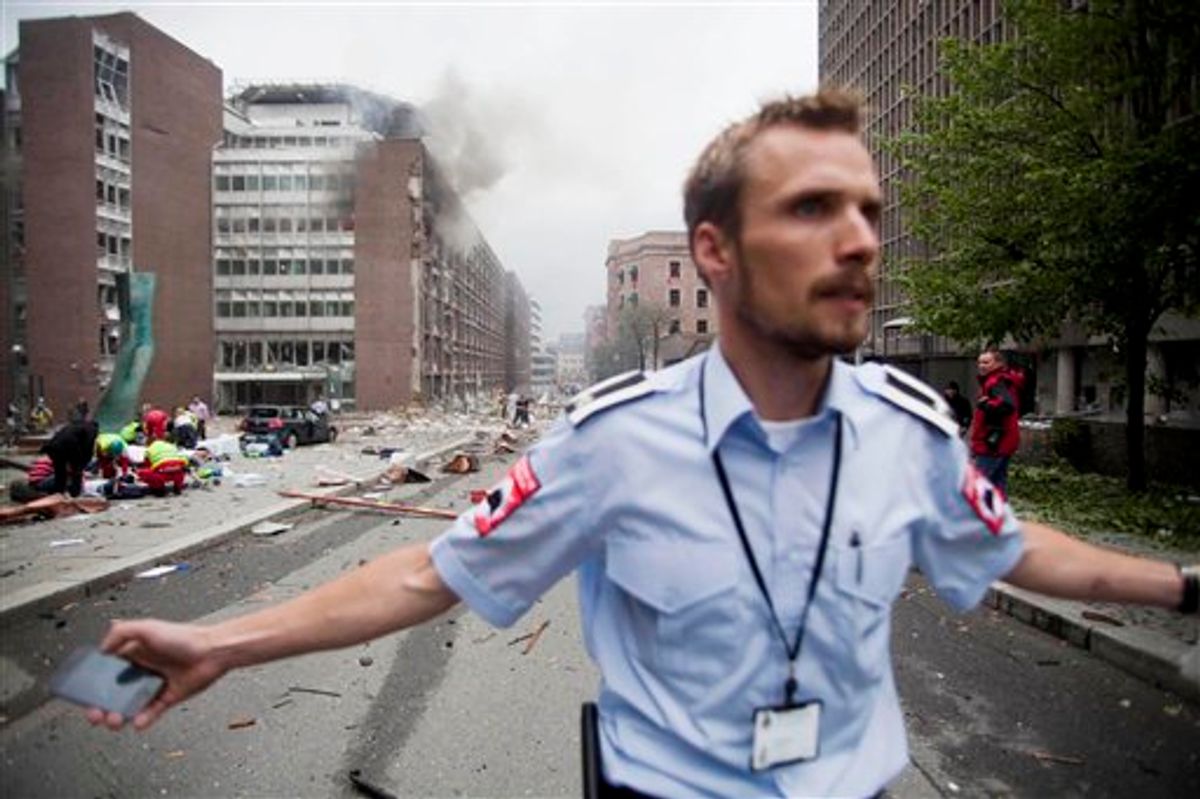 CORRECTS YEAR An official attempts to clear away spectators from buildings in the centre of Oslo, Friday July 22, 2011, following an explosion that tore open several buildings including the prime minister's office, shattering windows and covering the street with documents.(AP Photo/Fartein Rudjord) NORWAY OUT: (AP)
--

A powerful bomb exploded in Oslo, Norway today near the office of that nation's Prime Minister, killing at least 7 people, and that was followed by a shooting attack at a camp of young leaders of the ruling Labour Party where the Prime Minister was scheduled to appear.  It should go without saying that such violent attacks aimed at civilians are inherently unjustified, and the attack on the camp, which wounded several teenagers, is particularly vile and tragic.  The perpetrators of these attacks are unknown, as is their motives, though one self-described "jihadi" group claimed responsibility.

It is, however, worth commenting on both the prevailing descriptions of Norway as well as the reaction to these attacks, as they reveal some important points.  Most media accounts express bafflement that Norway would be the target of such an attack given how peaceful it is; The New York Times, for instance, said "the attacks appeared to be part of a coordinated assault on the ordinarily peaceful Scandinavian nation."  This is simply inaccurate.  Norway is a nation at war -- in more than just one country.  For instance:

The NATO force of which Norway is a part has explicitly declared Libyan leader Moammar Gadaffi to be a "legitimate target" and has repeatedly attempted to kill him; one attempt on Gadaffi's life -- a bombing attack on his son's residence -- resulted in the death of the dictator's son and three grandchildren.  In response, Gadaffi "vowed to attack 'homes, offices and families' in Europe in revenge for NATO airstrikes," adding that "your homes, your offices and your families, which will become military targets just as you have transformed our offices, headquarters, houses and children into what you regards as legitimate military targets."  The semantic games of the Obama administration notwithstanding, that is not a "peaceful" situation; those are nations at war.

Then in Afghanistan, there is this (click on image to enlarge):

Again, nobody knows who perpetrated these attacks or why (though the self-described jihadi group claiming responsibility said, as the NYT put it, that it "was a response to Norwegian forces’ presence in Afghanistan and to unspecified insults to the Prophet Muhammad").  But whether these attacks are related to those wars or not, I simply do not understand this bafflement being expressed that Norway -- of all countries -- would be targeted with violence.

Regardless of the justifications of these wars -- and Norway is in both countries as part of a U.N. action -- it is simply a fact that Norway has sent its military to two foreign countries where it is attacking people, dropping bombs, and killing civilians.  Historically, one reason not to invade and attack other countries is because doing so often prompts one's own country to be attacked.  Western nations typically only attack countries that are incapable of responding in kind, but those nations and their sympathizers are capable of perpetrating asymmetrical attacks of the sort that Oslo just suffered.

This has nothing to do with justification, as these kinds of civilian-targeting attacks are, as I said, inherently unjustifiable (though if NATO declares the leader of Libya a "legitimate military target" and air bombs his residence, what's the argument as to why the office of the Prime Minister whose country is at war with Libya is not a legitimate target?).  The point is that it's completely unsurprising that a nation at war -- whether Norway or the U.S. -- is going to be targeted with violent attacks.  That's what "being at war" means, and it's usually what it provokes.  And the way this fact is suppressed ("a coordinated assault on the ordinarily peaceful Scandinavian nation" = the post-9/11 why do they hate us?) highlights how we view violence as something only those Others commit, but not we.

That relates to the second point I want to make: the reaction to the attacks in Oslo.  Ever since news of the attacks emerged this morning (U.S. time), the interest in them has been intense, as has media coverage of them and the disgust expressed toward them.  That's understandable: the destruction and carnage quickly visible from photographs online should make any decent person recoil in disgust.

Still, I can't help noticing, and being quite bothered by, the vast difference in reaction to the violence visited on Western nations such as Norway and the violence visited by Western nations (particularly our own) on non-Western nations.  The violence and indiscriminate death brought today to Oslo is routinely and constantly imposed by the U.S. and its closest allies in a large and growing list of Muslim nations.  On a weekly basis -- literally -- the U.S. and its Western allies explode homes, mangle children, extinguish the lives of innocent people, disrupt communities, kill community and government leaders, and bring violence and terror to large numbers of people -- those are just facts.  And yet a tiny, tiny fraction of attention, interest and anger is generated by such violence as compared to that generated by the violence in Oslo today.  What explains that mammoth discrepancy in interest, discussion, and media coverage?

Whatever accounts for it, the impact is to minimize and suppress the consequences of our own violence while focusing almost exclusively on the violence of others.  The solution is not to dismiss or justify acts such as the Oslo bombing.  It's to realize that our own country and those in alliance with it -- unintentionally or otherwise -- replicate the horror that took place in Oslo in countless places around the world with great regularity, and that requires at least as much attention and discussion as the Oslo attacks are sure to receive.

UPDATE:  The New York Times headline was quick to suggest responsibility for these attacks:

Yet some reports now say that Norwegian police believe the perpetrator was a native Norwegian driven by domestic opposition to the government.  As I wrote three different times here, both the perpetrators and their motives are unknown, and none of the points I made -- which relate exclusively to the reaction to these attacks -- are changed in any way based on the identity of the perpetrators.  Except that I would add one point about Western reaction if indeed it turns out to be a domestic rather than "terrorist" (i.e., Muslim) attack: American interest in these attacks and the desire to be seen publicly denouncing them will quickly diminish -- almost to the point of non-existence -- if the perpetrators are not Muslim.  Add that to the list of revealing aspects of the reaction to this story.