This week we're on the fence about Marilyn Monroe's sex tape, mice with superbrains, and another Ryan Gosling flick 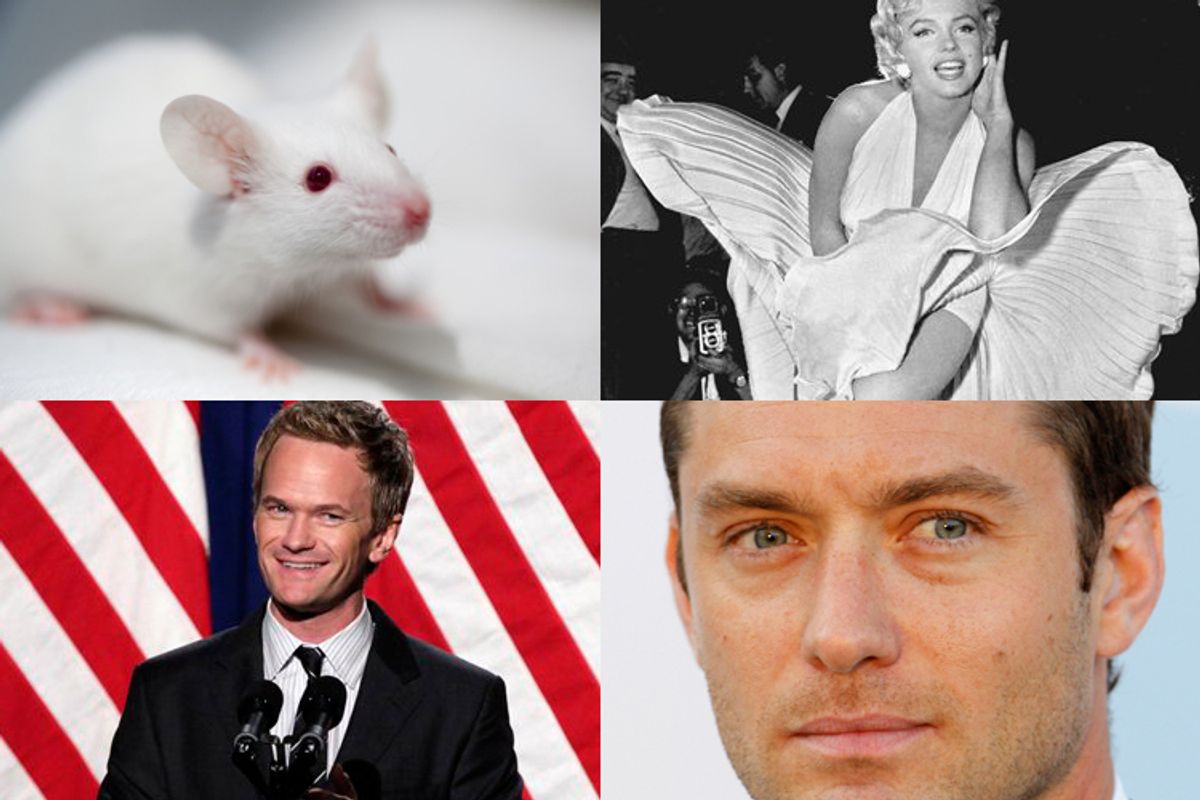 Can you guess why these things are making us feel weird?
--

1. Octomom caught on tape saying she doesn't like babies: Is this really a shocker? She has eight toddlers needing constant attention. I'd probably stress out and complain about hating them too, most days! So would you. So would every mother! I never thought I'd say this, but leave Nadya Suleman alone already.

2. British scientists decide they don't want mice with human brains after all: "What? Oh, no reason. It's not like anyone's already done that experiment or anything. We just want to be extra careful. Speaking of which, though, if you come across your DVD remote lying on top of one of these things, you might want to give us a call."

3. Jude Law enters the Rupert Murdoch fray: If the British actor really had his phone hacked by News of the World reporters while he was in New York, that could mean a trial for the News Corp. head here in the United States. On the other hand, he's filing this from something that happened in 2003. When does the statute of limitations run out on this type of stuff?

4. Marilyn Monroe's latest sex tape emerges ... maybe: Call me old-fashioned, but is the "Borges Cultural Center" really the place where we want to auction off a video of a dead woman having sex? Especially since it might not even be the right dead woman? On second thought, Jorge Luis would probably find this whole thing very funny.

No, this just isn't doing it for me. My mom is into Fabio, and mom doesn't "get" ironic commercials, so I don't know whom this is marketed to. Someone bring back Isiaiah Mustafa. Now, please.

6. Nicholas Cage's son Weston arrested on domestic violence again: You know, I used to defend Nic Cage a lot, but when your newly married progeny can't stop getting into physical fights with his wife, I start to wonder if the apple isn't falling far from the crazy tree. Although I have to admit, challenging Kimbo Slice to a boxing match is sort of a genius idea to take the heat off the arrest. Weirdo.

7. Petitioning to let Neil Patrick Harris host the Oscars: Sounds good in theory, but we may have missed the NPH boat. Let's try for Chris Colfer instead.

8. Oh good, a movie based on parts of "Gravity's Rainbow": Thanks to "Impolex," thousands of grad lit students will still have no idea what the hell Thomas Pynchon's book is about.

9. Trailer for "Drive" premieres at Comic-Con :