Is Amy Winehouse the latest victim of the same force that killed Hendrix and Cobain? Experts weigh in 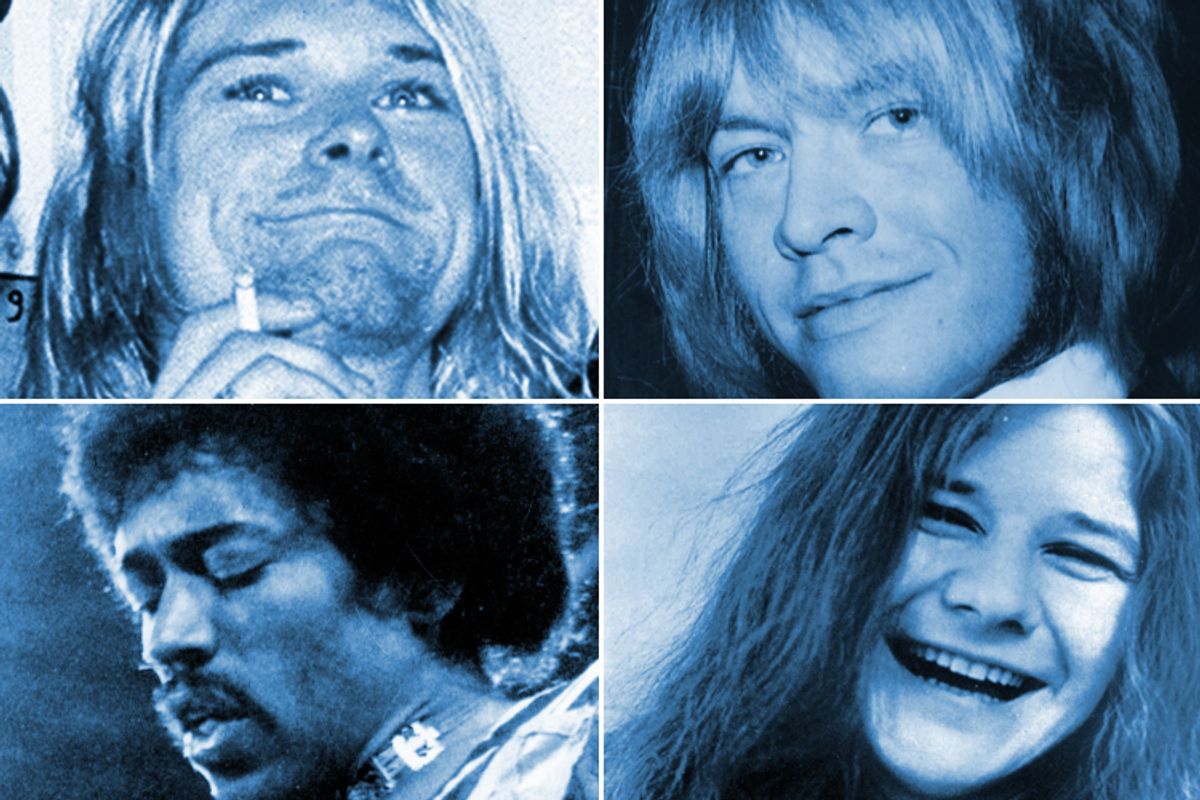 Forever 27: Is there some fact to the superstition?
--

As we all now know, these influential rock and blues stars all died at 27 and are some of the most famous members of the "27 Club" (also known as the Forever 27 Club). The media's been obsessed with it since Winehouse died Saturday. But musicians are aware of it, as well. Kurt Cobain knew about the curse of 27: His mother, Wendy O'Connor, famously said after his death: "Now he's gone and joined that stupid club, I told him not to join that stupid club."

But though the curse might bring chills up your spine, all it takes is one look at someone like Mick Jagger, Lou Reed or Iggy Pop to remind you that death doesn't work in real life the way it does in the fatalistic "Final Destination" films. For every famous musician or artist who has died at 27, of course, hundreds more, many with personal problems just as significant, have not.

Yet something about this legend persists even today with Winehouse's death, despite the fact that the majority of the infamous 27 Club members died within a two-year span in the late '60s and early '70s. (Creepy footnote: The two bookends to that period -- Brian Jones and Jim Morrison -- both died on July 3 ... exactly 24 months apart.)

So what are we so scared of? I asked some of rock music's leading experts for their take on the 27 Club. Was there some truth behind the mythology?

Sara Marcus, author of "Girls to the Front: The True Story of the Riot Grrrl Revolution": The late 20s are a time in our lives when we try to figure out how we're going to grow up. The people who believe in astrology call it the "Saturn return" theory, which I just think is one way of talking about a psychological truth in the way that the progression of age goes in our culture.

I think that even if you're a star very young, 30 is the age where you feel you need to have everything figured out. So as you approach your late 20s and you don't have things figured out yet, it becomes more apparent. That's why you see people around that age go to grad school.

I'm not at all an expert on addiction, but with Amy, there was this sense that she reached this level where she couldn't figure out how to get to her next "thing." The potential for self-destruction as a musician is greater than for a movie star. Physically, the mechanical requirements of being a movie star require you to be on sets for long periods of time. For rock stars, your life consists of a lot of waiting around -- of idleness of the day coupled with the pressures of performing at night. It's destabilizing, it's dead time, and it's very easy to fill with addiction.

Charles R. Cross, author of "Heavier Than Heaven: A Biography of Kurt Cobain": No person, no matter how many demons they had at age 27, would want that club in their obituary. I've seen some people who think that these deaths are intentionally timed. Like Kurt Cobain intentionally killed himself at that age simply to be in that club. You know, he suffered from depression, drug addiction and numerous other issues. He tried to kill himself at 17, 25, 26 as well, so it's not like he did it just to join a club. It's unfortunate that as a grieving mother, [O'Connor's] quote about the "stupid club" is what made it into the press, because now that's what we think of when people die at that age.

So no, I don't think there's a curse. My argument would be that around 20, 21, these particular people found fame. Coupled with other demons, that access to fame can make 27 something of a milestone. But it's not just that age: 32 and 45 are just as common; you could go back and find other significant rock stars that died at those ages. And not just musicians die at 27: Basquiat, one of the romantic poets ... people die at all ages. What makes the 27 Club so infamous is that in the '60s, three of the top-10 selling stars of that era died at that particular age.

Sasha Frere-Jones, music critic for the New Yorker: I think [the number] is meaningless. What we're talking about are extreme accounts of extremely troubled young people, which I don't think is a phony category at all ... I don't think it's hogwash to correlate people who fit into that "burning brightly" cliché; I think that means something. But the number itself is meaningless.

You could draw parallels here -- and I'm not trying to be funny at all -- that as certain drugs have become way more potent in the last 10 years, fame itself became much more potent. I do worry that this new speedball combination of fame, talent, sensitivity and a chemical predilection is something that most people won't be able to handle. Fame looks like literal torture these days.

So does the 27 Club exist? I don't know. It kicks in when it kicks in. How old was Elliott Smith when he died? He was a little older. Hendrix, we have no evidenced that he was depressed. Brian Jones and Morrison I don't know that much about. A lot of those people in the '70s, it might have just been crap luck. But we know how unhappy Cobain was. It's really like comparing apples to oranges.

If we're just spitballing theories here, we know that medically, stress is a very real thing. This doesn't happen during the first flush of success, when people are very young. It happens when the expectations are gigantic. That's the thing they all have in common, you can say. You don't hear his name that much because he didn't die, but Michael [Jackson] started going off the rails around this time, when "Thriller" came out. [Note: Michael was 24 in 1982.] You can't get much more pressure than having just made "Thriller," and that's when his hair caught on fire and he -- by his own accounts -- started taking the painkillers.

If you want to come out of this with one theory, it's that when the expectations reach a fever pitch, it becomes its own disease. Not to get all smoke monster on it, but I'm only half-bullshitting when I say I think it's going to take the weak ones first.