Does grieving for Amy Winehouse distract from bigger tragedies?

The singer's death prompts a familiar Internet backlash. Here's why the critics are wrong 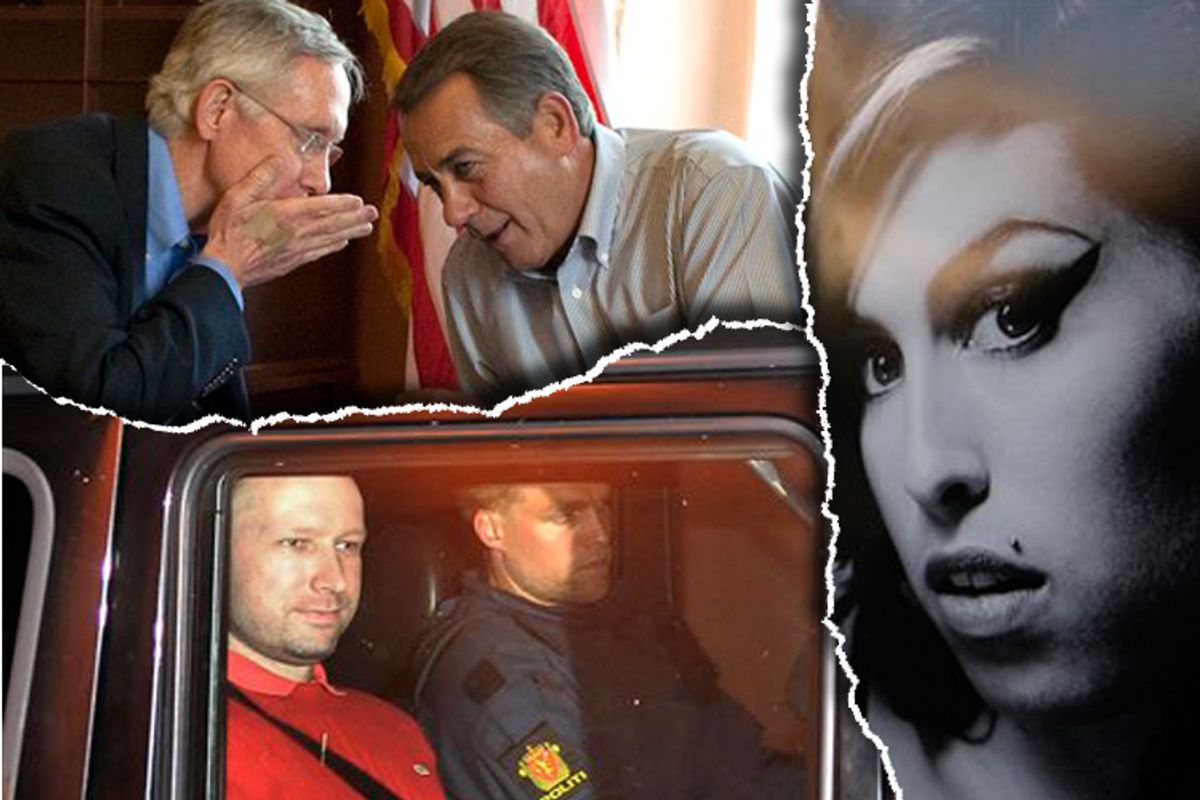 Poor Amy Winehouse. Not only did the 27-year-old singer, who had a troubled history of drug and alcohol abuse, have the misfortune to die this weekend in London of yet undisclosed causes, she did so in the midst of an already jampacked cycle of terrible news. And everybody knows that a) people can only feel bad about one thing at a time, and that b) in what the U.K. Guardian helpfully refers to as the "hierarchy of death," it's wrong to care about a single individual when there are higher body counts elsewhere in the world. Let the sanctimony begin!

It seemed within minutes of the news of Winehouse's untimely demise, the Internet was abuzz with outpourings of grief and chastisements of said grief. "Amy Winehouse: Sad but not nearly as sad as 4M starving Somalis who can still be helped" went a typical, much forwarded tweet that cropped up in my feed, along with phrases like "real problems," "dead junkie," and "What did anybody expect?" God forbid a young woman's death not turn into an opportunity to announce to the world your cleverness in predicting it all, the unworthiness of someone who had the disease of addiction to merit sympathy, or your outrage because apparently you've been too engrossed in Somalia to give a toss.

It's fair to say that the popular media -- and those of us who follow it -- are often guilty of disproportionate attention to sensational stories. And when that happens, there is the risk of giving less care to tougher, more nuanced but important events. Believe me, if Nancy Grace and Dr. Drew never say another goddamn word about anything or anyone, that will be just great in my book. It's a fine line between newsworthiness and exploitation. And Winehouse's long-standing battles with her demons were a matter of public record; her debacle last month in Belgrade, when she was booed offstage, certainly appears to have been an ominous sign of what was to come.

But it is outrageously insulting to presume that anyone's response to a news story -- whether it's a celebrity death or a royal wedding -- is somehow trivial because it doesn't fall on the same place on your own personal worthiness scale. I see it all the time in Salon's comments -- how dare we run a story on a TV show when soldiers are dying in the Gulf? How could anyone care about an ad campaign when there's been a massacre in Norway? I'm sorry, I guess some of us didn't get the chart on how much attention and care and sorrow and concern we're supposed to devote to each world event, or what a huge personal violation it is if a news story you don't care about appears on the same page as one you do.

Different stories affect us all differently. And none of that, by the way, has squat to do with anyone's ability to feel or care or give assistance in any particular realm. Plenty of people who couldn't get their checkbooks out fast enough after the earthquakes in Haiti and Japan were still devastated over the death of Amy Winehouse. Why? Maybe because she was a luminous talent, and the loss of an artist always leaves a particular kind of hole in the world. Maybe because many of us who've had a heart broken in the last five years have had her whiskey voice as a late-night companion, and so she will forever be tied to the story of our own lives and loves. Or maybe because many of us, like recovering addict Russell Brand, know what it is to battle addiction or care for someone who does, and we can see so much familiar, painful history in Winehouse's sad tale.

Popular culture is culture. It matters because it's part of the soundtrack of our lives, the "where were you" memories that make our personal histories. It's the stuff that we laugh to and dance to together, and cry to alone in our bedrooms. So when it is shaken up, it matters. If you're too above it all to care, fine. But it doesn't make you nobler than anyone else. And I strongly suspect it doesn't mean you've been busy figuring out how to solve famine and political extremism while others were leaving flowers outside Amy Winehouse's home.

If all you've been doing is reading a different column of the newspaper, spare us the lectures about who's "wasting time" when that time isn't yours. There is no "hierarchy of death." And as I wrote when the news of Winehouse's death first broke, if you believe being sad over the untimely loss of a singer means a person can't care about Japan or Norway or Somalia, the imagination and compassion deficit are yours.