Obama and the Left: a problem for the WH?

Is growing dissatisfaction among liberal voters a threat or an asset for the President's re-election campaign? 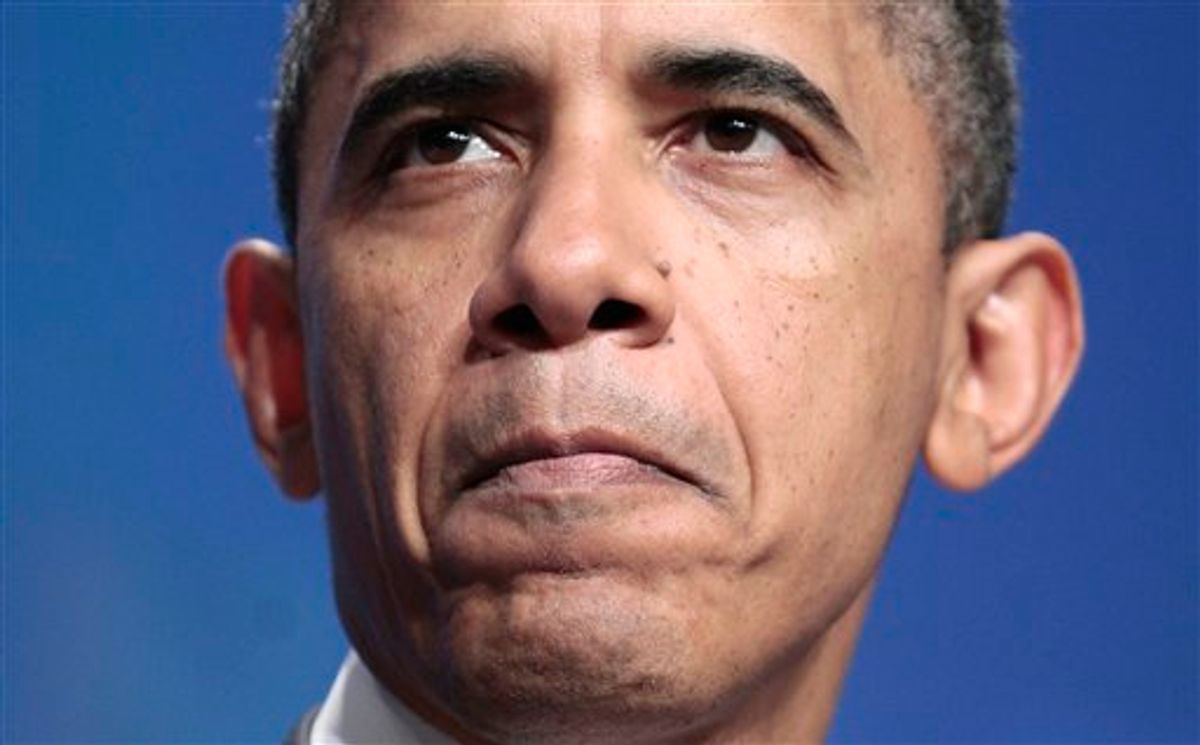 In Salon today, Ed Kilgore argues that the White House ignores liberal dissatisfaction with the President because it is largely confined to the "liberal elite" and "liberal opinion leaders" but has not extended to the average liberal voter to any substantial degree.  To sustain this argument, Kilgore dismisses as statistically aberrational and insignificant a CNN article from last week about its new poll which found Obama's overall approval rating driven down to 45% "in part by growing dissatisfaction on the left with the president's track record in office" and "signs of a stirring discontent on the left"; CNN added: "roughly one in four Americans who disapprove of the president say they feel that way because he's not been liberal enough."  Kilgore further argues that the White House knows that liberals, no matter how upset they become with Obama, will be scared into voting for him anyway by the GOP candidate, and thus can safely ignore their complaints.

There are several points worth noting about Kilgore's argument, one that is commonly held among many D.C. political and media figures.  Initially, Kilgore picked a bad week to depict that CNN poll as aberrational, given today's new Washington Post/ABC News poll which found, as the Post today put it:

More than a third of Americans now believe that President Obama’s policies are hurting the economy, and confidence in his ability to create jobs is sharply eroding among his base. . . . The Post-ABC poll found that the number of liberal Democrats who strongly support Obama’s record on jobs plunged 22 points from 53 percent last year to 31 percent. The number of African Americans who believe the president's actions have helped the economy has dropped from 77 percent in October to just over half of those surveyed.

Meanwhile, the latest Gallup poll shows that the President's approval rating among self-identified "liberals" has dropped to 70% -- the lowest it has been in many months (which means, of course, that 30% of liberals refuse to express approval for the Democratic President).  Other polls have found similarly large quantities of dissatisfaction:  "Nearly half of [Obama's] own base -- 45 percent of Democrats and Democratic-leaning independents -- want someone to challenge him for the Democratic nomination . . . Among pro-Democratic voters who want him challenged: pluralities of women, voters younger than 45, and those without a college degree."

At this point, the only factor that can lead someone to deny the significance of this trend is willful blindness.  And it's hard to imagine those numbers going anywhere but down as the realization sets in that it is the President who, now by his own admission, has been working hard to cut Social Security and Medicare benefits, and as the President increasingly pursues what is clearly his 2012 strategy:  casting himself as a trans-partisan centrist (his doing so vindicates, in my view, those of us who have long argued that there was nothing "new" about Obama's politics; it was just slightly re-branded Clintonian, Third Way triangulation).

Independently, and more to the point, approval ratings is only one of many barometers of a President's standing with his base -- and, at least in Obama's case, almost certainly not the most important one.  It's completely unsurprising that the vast majority of Democrats and even "liberals" -- when presented with the dichotomous approve/disapprove choice by a pollster regarding their own party's President -- will choose "approve"; that, in essence, is little more than a proxy for declaring one's tribal identity (which of the two sides are you on?).  But what propelled the Obama campaign in 2008 was not merely the number of people willing to vote for him but, rather, the intensity of his support.

It's one thing to be willing to go vote for a candidate on Election Day (or, more accurately, against the other candidate); it's another entirely to be willing to donate scarce money, canvass and evangelize, and infuse the campaign with passion and energy.  That many liberals will still be willing to do the former notwithstanding their dissatisfaction does not mean they will do the latter.  That level of progressive commitment to Obama's candidacy was vital to his victory in 2008, and its absence could be crippling in 2012 (a dependency on Wall Street cash even greater than 2008 can only take one so far).  Wasn't that one obvious lesson of 2010: the central role base enthusiasm plays in election outcomes?

Democratic Party supporters can try to put a happy face on this problem by citing approval ratings, but it only masks the serious problem of intense dissatisfaction and lack of enthusiasm (Matt Yglesias and others, for instance, touted a poll from Netroots Nation finding 80% approval for Obama as evidence that the base loves the President, studiously ignoring the much more significant fact that only 27% "strongly approved" of Obama in that poll, while 53% approved only "somewhat," and 20% expressed some form of disapproval [strong or somewhat]:  a poll of hard-core Democratic activists that finds that only 27% "strongly approve" of their own Party's president is hardly some sign of a healthy relationship with the base: quite the opposite).

Perhaps the most unconvincing part of Kilgore's argument is the notion that the White House cares about the views of its liberal base but it is not worried only because there is not pervasive anger among the average base voter.  For more persuasive is the amply-supported argument from this blogger that Obama wants to be attacked by liberals because of the perception that it politically benefits him by making him look centrist, non-partisan and independent; it also endears him to the D.C. media class, which -- in its classic anti-democratic style -- swoons for any politician who scorns their own voters.  With this strategy, the angrier liberals are with Obama, the better off he is; hence, openly boasting about aggressive efforts to cut Social Security and Medicare benefits, just like publicly chiding liberals for not being more appreciative of him as he repeatedly did before the 2010 election, is designed to highlight this schism.  It's not merely that he lacks a fear of liberal dissatisfaction; it's that he affirmatively craves it.

But that's a dangerous strategy.  U.S. presidential elections are very closely decided affairs, and alienating the Left even to some degree can be lethal for a national Democratic campaign; shouldn't the 2000 election, along with 2010, have cemented that lesson forever?  Kilgore (and the White House) are almost certainly right that most dissatisfied progressives will end up voting for Obama no matter what.  The 2000 experience has soured many to the notion of supporting a third-party candidate, and the fear-mongering that will undoubtedly replace "hope" as Obama's re-election strategy will be, like most fear-based campaigns, effective.  The stunning silence in the face of Obama's efforts to cut Social Security and Medicare benefits (along with his pursuit of a whole slew of other policies ostensibly anathema to liberals) should put to rest any notion that there will be mass defection of liberal voters in 2012 to the GOP or a third party.

But that fact is only a small part of the story.  Even small defections, along with pervasive cynicism, disappointment, and apathy, can sink Obama's campaign.  Kilgore's underlying assumption is correct, and it's one I've argued many times: a political constituency that slavishly and unconditionally supports a Party will inevitably be ignored by that Party.  That's just basic political rationality.  The question is whether the clearly growing discontent on the Left will translate into anything more meaningful than impotent words.  I genuinely don't know the answer, but the hubristic confidence on the part of the White House, as expressed by Kilgore, seems very unwarranted.

Columbia University's Jeffrey Sachs has an excellent assessment of the role both parties are playing in America's decline, along with their competition as to who can be more subservient to Wall Street; he concludes:  "America needs a third-party movement to break the hammerlock of the financial elites. Until that happens, the political class and the media conglomerates will continue to spew lies, American militarism will continue to destabilize a growing swath of the world, and the country will continue its economic decline."  I highly recommend Sachs' entire article.

I was on Democracy Now this morning discussing the Oslo attack and reactions to it.  It can be viewed here, beginning at roughly 33:00 (I'll post the video of the segment once it's available).

UPDATE:  The video of the Democracy Now segment I did this morning is below; a transcript will be posted later today to this page: