Why we should protect those accused of rape

DSK, Kobe, Assange, Flatley: Did they deserve to be smeared before a verdict? A legendary trial attorney argues no 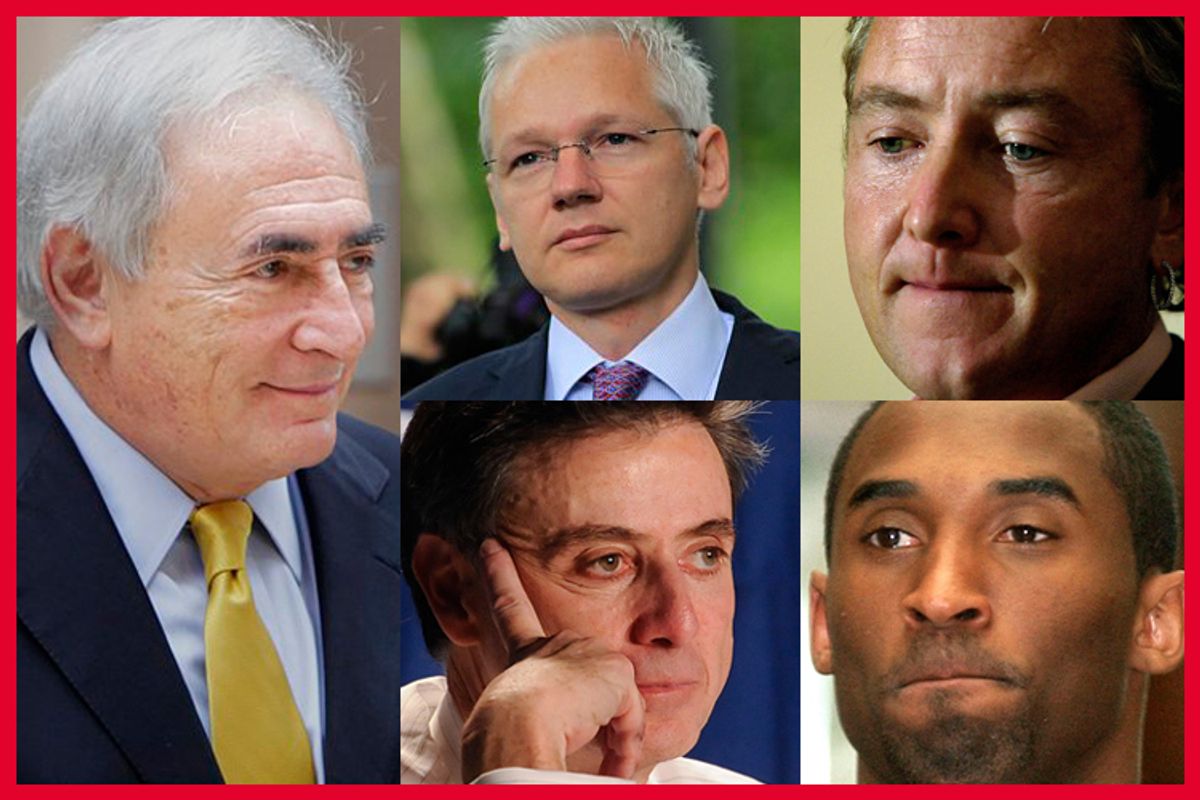 What do David Copperfield, Michael Flatley, the Duke lacrosse team, the four Hofstra students, Rene Angelil (Celine Dion’s manager-husband), Rick Pitino, Kobe Bryant, KBR/Halliburton and Julian Assange have in common? All were accused off rape, and will, in all likelihood, be remembered for that association, regardless of what ultimately happens (Assange's case is ongoing; none of the cases have led to a conviction). It is time for a modest reform in rape jurisprudence; the accused should be granted anonymity unless and until found guilty.

Ray Donovan, Reagan’s treasury secretary, after he was acquitted of trumped-up corruption charges, famously asked: "Where do I go to get my reputation back?" Before Dominique Strauss-Kahn knocks on that door, the short answer is: Nowhere, not possible, it is a permanent stain. President of France? Forget it. Even the French cringe at a man with a damaged reputation representing their country.

Why should we be surprised? We did all we could to make a public spectacle of him. Dragged him off his Paris flight; interrogated him all night to look suitably haggard; paraded him, handcuffed between two beefy cops, through a scrum of tabloid cameras; then plastered the seedy photographs worldwide. He was hounded out of his apartment; shuttled from place to place like nuclear waste; an electronic nanny clamped on his ankle and suffered the ignominy of paying $200,000 a month for his own prison guards.

We are relentless at public shaming and humiliation.

This type of abuse is routinely suffered by lesser-known rape defendants. They are terrorized by the media circus, and turned into carnival freaks. Unruly crowds rally in front of their home. They are followed, spat on, chased through the streets, forced to move, lose their sanity and some even commit suicide to end the abuse. They are the new victims of modern technology: Google, Twitter, Facebook and cable news. The accusation is forever imprinted in cyberspace, only a keystroke away. Reputations are smeared, finances eviscerated, careers destroyed; jobs, businesses, friends, wives and children lost forever. All of this regardless of the verdict.

Does this have to happen? Newsrooms self-regulate to cloak the identity of a rape accuser. Editors understand that the potential harm of naming putative victims outweighs any journalistic reason to publish. But apparently journalist ethics don't extend to the presumptively innocent. We grant the accuser name suppression due to the stigma attached to rape but, after a gradual, and justifiable shift in our collective consciousness, there now is a far greater stigma for men accused of rape. The Supreme Court called rape "highly reprehensible, both in a moral sense and in its almost total contempt for the personal integrity and autonomy of the female victim." It is a powerful and repulsive charge, and the accused should have their identities protected by law.

Critics will assert that democracy demands that all defendants be equal before the law, and there is no reason rape defendants should get a pass. It would create a double standard. So why take that step? Simple -- equality. The person who levels an accusation is sheltered through anonymity. Doesn’t it violate equality to treat the accused differently?

For decades, there has been a unique, growing disparity between the way we treat accused rapists and their accusers. It's grown because of a relentless pressure to manipulate the rules to increase arrests and convictions in rape cases. The protections against false accusations have been whittled away one by one to make it easier to charge and easier to convict, with the unintended consequence of making it easier to make a false accusation.

In order to more easily file criminal charges, these basic protections have been eliminated:

And in pursuit of convictions, rolled back protections have included:

We need a modest reform to mitigate these changes. This is not a zero-sum game where a benefit to the accused is detrimental to the accuser. There is an obvious benefit to discouraging false charges and denying the ability to use them as blackmail or as a weapon in domestic disputes.

False accusations of rape appear far higher than false accusations of other crimes. One study, conducted over nine years in one Midwest city, found that 41 percent were false; a study of two state universities over three years found 50 percent to be false. Meanwhile, the FBI reports the number of unfounded rape accusations at 8 percent, while the average rate of all unfounded crime reports is at 2 percent. We don’t know the precise figures because rape statistics are unreliable or misleading, and much depends on how police categorize false, unfounded, insufficient evidence, etc., but we know the rate is high.

There are legitimate objections to anonymity. An argument could be made that a grand jury, whose proceedings are private, should offer innocent suspects some protection. But there is a lot of truth in the legal cliché that any prosecutor worth his salt can get a grand jury to indict a ham sandwich. And it certainly appears that the woman who accused DSK convincingly lied under oath at the grand jury about at least part of her story.

It is also against the public’s interest for anonymous trials. As Judge Damon Keith observed: "Democracy dies behind closed doors." The public has a right to know what goes on in its courts. The open administration of justice is fundamental to democracy. An ancient legal maxim commands that justice must not only be done, but must be seen to be done. The press should therefore continue to have access to rape cases. But the identities of the accused should, by law, be granted the same rights as those of the accusers, and their identities should be kept private unless there is a conviction.

The British twice tried this remedy. There were reporting restrictions for both the claimant and defendant in rape cases in the 1976 Sexual Offences Act but this was abolished in 1988. In 2010 they tried again with a modest provision granting anonymity only between arrest and charge but it was abandoned because of vigorous objection from feminists, who worry that women are less likely to accuse if the suspect is not named. I don’t think that is true and there is no evidence of it. In fact, I think there's a more logical case to be made that a reduction in publicity might raise the number or actual rape cases being reported.

And in that scenario, the parties who deserve to benefit, do: The victims, the public and the falsely accused. The bigger question, though, is whether the country even has an elected official with sufficient backbone to suggest this be done.