"Cowboys & Aliens": Daniel Craig does Eastwood in a steampunk mashup 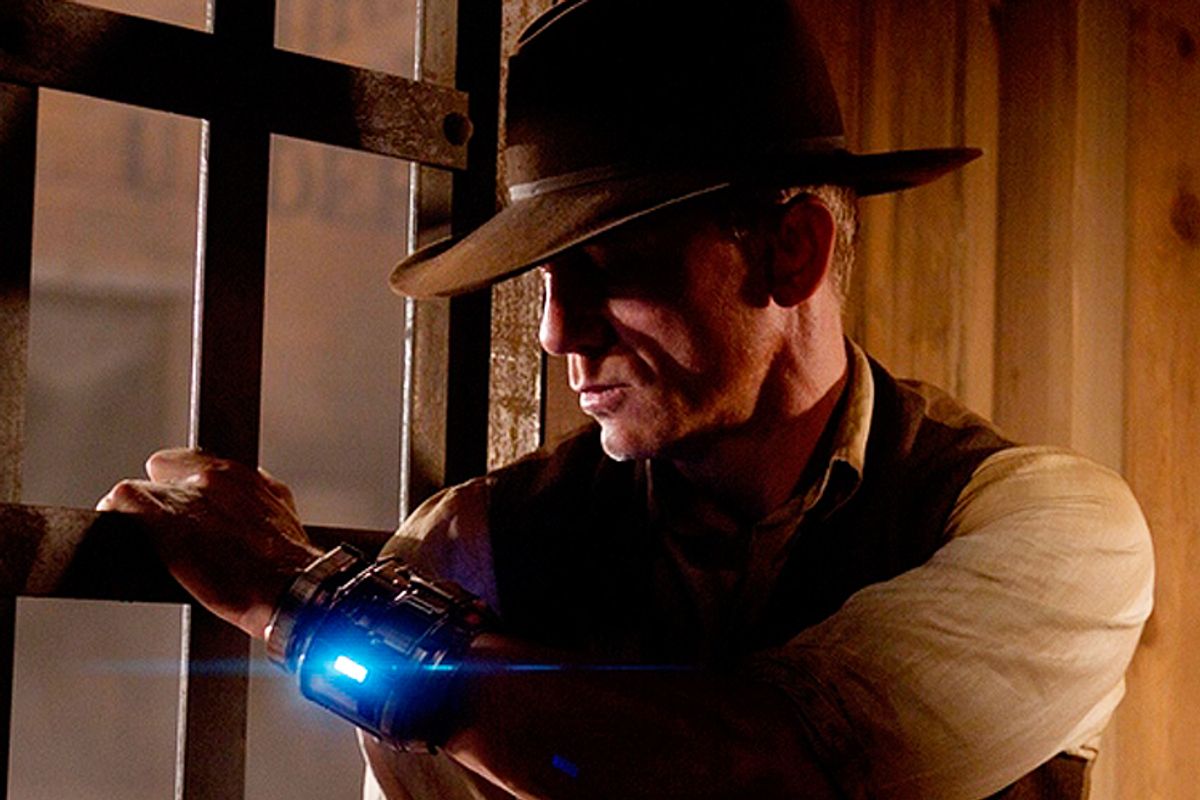 You know what's wrong with this damn country? Chicken Caesar salad. (Stand aside, Rush Limbaugh. I'm talkin' here.) I could just as well bring up flavored coffee. I mean, what was so doggone wrong with the flavor of coffee that people felt like it would be better off tasting like hazelnut candy and imitation vanilla extract? But it's the ubiquitous, and nearly always awful, chicken Caesar that really fries my butt. Caesar salad wasn't something you ate all the time, and not everybody liked it. It was garlicky and spicy and salty, and in the old days often had anchovies ground up in the dressing and served whole on top of the lettuce. (Oh, I know they still make it that way, for $17.95, in some ever so precious restaurant you frequent. Spare me.)

Then somebody had the brilliant idea that more people might like Caesar salad if it was less scary -- if it was less like itself, in effect -- so they took out the fishies and turned the dressing into a flavorless, oily, Parmesan-cheesey glop you could buy at the grocery store. Fewer people hated that, I imagine, but it was an inherently boring salad no one would ever make or buy on purpose. Romaine, with a salty, grainy, viscous fluid somewhat like dirty motor oil drizzled across it. Then came the stroke of genius, in the form of chopped-up strips of grilled chicken breast, the most innocuous and non-carnivorous form of meat. The result is a hybrid mishmash of incompatible elements, which seems as if it ought to be appealing and which nobody actively dislikes, but which is, in fact, unsatisfying on every level. And that's how we get, dear reader, to "Cowboys & Aliens," which is not merely the chicken Caesar of movies but the chicken Caesar with raspberry vinaigrette, bleu cheese and some of those godawful walnuts crumbled on top.

I'm not going to claim that "Cowboys & Aliens" is badly made (as chicken Caesar salads go). Viewed strictly as an exercise in technique and pop-culture savvy -- the only standards we're encouraged to apply to Hollywood movies -- it's reasonably accomplished. As director Jon Favreau has demonstrated in the "Iron Man" movies, cleverness and indulgence are his strong suits, and cinematographer Matthew Libatique (of "Black Swan," e.g.) makes sure that the western/sci-fi mashup looks great. Daniel Craig makes a terrific western drifter in the Eastwood mold, with no name and no past, and he doesn't look, sound or act anything like James Bond. Harrison Ford plays the ruthless cattle baron who runs an empire on the outskirts of town, and Paul Dano is his wussed-out, stringy-haired, overly arrogant son. If it's 100 percent predictable that Ford's crusty old coot will ultimately be revealed as a Civil War veteran (from the right side) with a few fragments of nobility still lodged within his soul, and that he'll eventually break out that one-sided Harrison Ford smile, it's nonetheless an enjoyable spectacle.

In fact, "Cowboys & Aliens" simulates an atmospheric if unoriginal western for a while, with a nice supporting cast that features Sam Rockwell as Doc, the bespectacled saloon-keeper who can't shoot straight (but of course will when he's badly needed), Clancy Brown as the gruff but warm preacher, and Keith Carradine as the embattled sheriff trying to impose law and order on Ford's Col. Dolarhyde. Oh, wait; you're not supposed to call him "colonel." "Nobody calls me colonel," Ford growls. "Them as did so are mostly dead." In the hooker-with-a-heart-of-gold role we find Olivia Wilde, as an implausibly leggy and gorgeous mystery girl who's quite interested in Craig's brawny gunslinger character, erotically and otherwise: Where did he come from, why can't he remember his name and why does he have a weird metal bracelet on his wrist? (That kind of thing might be found all over the place in Arizona today, but in the 1870s it would've seemed, y'know, funny.)

But the thing is, nobody wants to watch a reasonably atmospheric western these days, not unless it's a pastiche with, like, 10 other things cleverly mashed into it. (See also Gore Verbinski's animated-chameleon western, "Rango," which is somewhat better.) So down come the herb-infused extra virgin olive oil and raspberry balsamic vinegar and the paper-thin horrible slivered almonds from the sky, in the form of a bunch of monsters from outer space in leathery-metallic flapping airplanes who abduct numerous lesser members of the cast, including pantywaist Paul Dano and Doc's hot Mexican wife (who actually isn't played by Salma Hayek but looks a lot like her). And so Anglo-American civilization is briefly swayed from its noble task of exterminating lawlessness (and Indians), and all normal considerations of class and race are thrust aside in the battle against the giant slimy bullfrogs from Planet X, who are in fact quite nasty-looking bastards when we get to see them.

Now, I can feel some folks out there preparing to arise from the sofa and take up arms, so let's backtrack a little. "Cowboys & Aliens" was "inspired" by a 2006 graphic novel created by Scott Mitchell Rosenberg and his collaborators, a polite way of saying that Favreau and his team of writers (seven are credited) took the concept and the setting and nothing else. Rosenberg's comic isn't necessarily so great, but it does possess a storytelling brio and a hectic, pulp-novel craziness -- alien defectors and human turncoats! X-ray goggles! Exploding arrows! Anti-gravity horseshoes! -- that the film version never even tries to fake. Furthermore, I'm also aware that both the movie and the comic belong to a marginal steampunk tradition that brings sci-fi elements into unlikely historical settings. (You can argue that goes all the way back to "The Wild Wild West," meaning the 1960s TV series rather than the regrettable Will Smith-Kevin Kline movie version.)

Also, I know that by attacking a seemingly innocuous work of highly expensive summer entertainment, it sounds like I'm telling you not to have fun, and that you should be thinking about the deficit ceiling or Somalia rather than space invaders in the 19th-century Arizona Territory. Believe me, I know hardly anything about John Boehner, and wish I knew less. The premise of "Cowboys & Aliens" isn't the problem, and some of its individual effects and action scenes are pretty fun. (Daniel Craig goes on a peyote-fueled vision quest with the Apaches; there's an upside-down steamboat in the middle of the desert, for unknown reasons.) But the movie never makes much of a case for its own existence; it's a mediocre western clumsily welded to a mediocre alien shoot-'em-up, and if you allow yourself to think about its treatment of history for as long as one second, you'll feel insulted. As with so many Hollywood movies, you have to decide to enjoy it in advance, and then push grittily onward with your enjoyment, ignoring the evidence. I say if you're gonna make me a Caesar salad, keep your desiccated ancient chicken breasts in the freezer.