"Crazy, Stupid, Love." is chaotic and nonsensical, but still might be the summer's best grown-up comedy 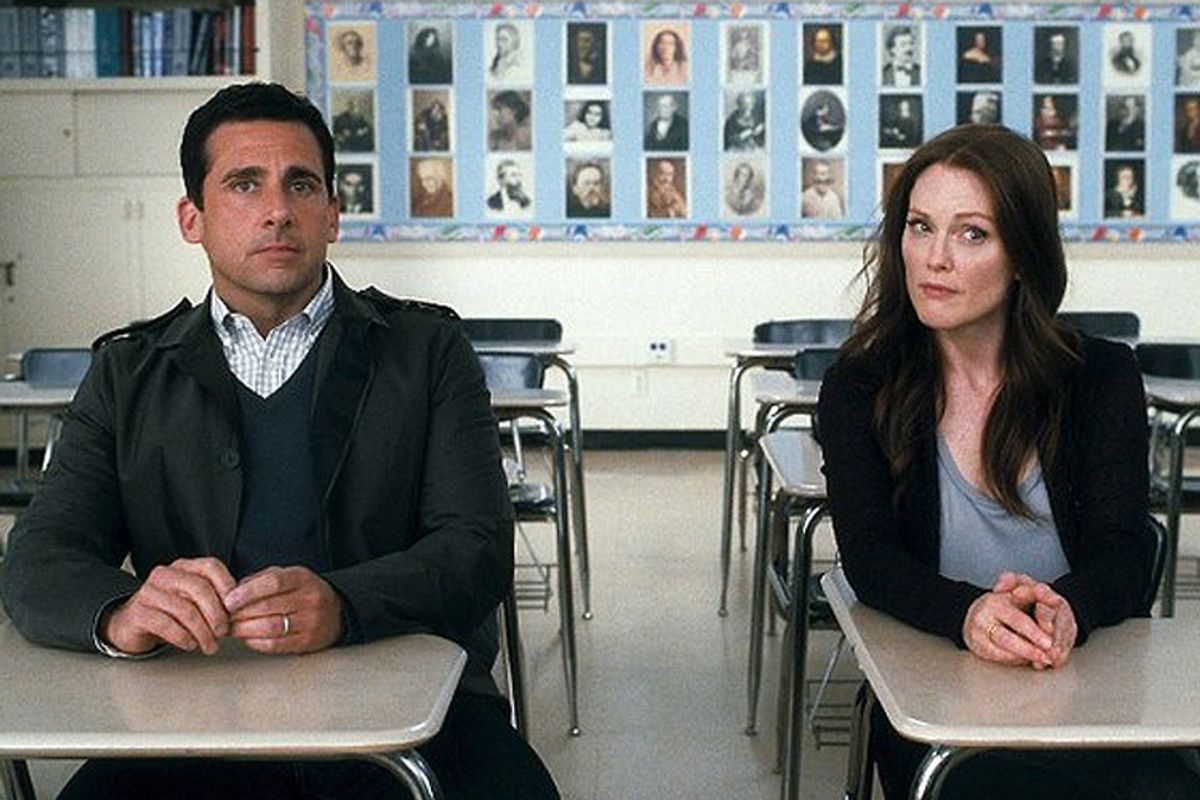 It might sound harsh to call "Crazy, Stupid, Love." -- yeah, there's a period in that title, to the discomfiture of copy editors everywhere -- a total mess, but I mostly mean that affectionately. This latest foray into mainstream comedy, or at least toward mainstream comedy, from Glenn Ficarra and John Requa, the directing duo who brought us the much-discussed but little-seen "I Love You Phillip Morris," looks great and has a terrific cast: Steve Carell as a cuckolded husband trying to get his groove back, Ryan Gosling as the sharp-dressed ladies' man who serves as his Mr. Miyagi-style instructor in babe-magnetry, Julianne Moore as the stressed-out ex-wife and love of Carell's life who is now dating lizard-like Kevin Bacon, and zany, illuminated-from-within redhead Emma Stone lustily denying that her life is "PG-13" when we know better.

What could go wrong, right? Plenty, as it turns out, but "Crazy, Stupid, Love." (argh! That period!) is richer and more enjoyable than the other lame-stream comedies Hollywood has churned out this summer, even though it doesn't know what kind of movie it wants to be when it grows up. Is it a rom-com aimed at the female audience? Not really; Moore is wonderful as Emily, disgruntled wife to Carell's profoundly square and boring Cal, but the script by Dan Fogelman (until now known for Disney animated films like "Cars" and "Tangled") doesn't offer her much to work with. Is it a raunchy-sweet guy comedy in the played-out Apatow vein? Again, no. This actually is a PG-13 comedy, inexplicably; all the shtick between Cal and ultra-suave ladykiller Jacob (Gosling) is only moderately funny, not all that risqué and observed from a wry distance. Is it a mashup of "Fight Club" and "American Beauty," with the laff-meter turned up and nobody getting killed? That's a lot closer.

Ficarra and Requa seem to like working with characters who are right on the edge of being totally intolerable, like Jim Carrey's unprincipled and shallow con man in "Phillip Morris." If we know that Cal will turn out to be OK in the end because he's Steve Carell, he's nonetheless hard to take. Nobody in the world could blame Emily for dumping this simultaneously flavorless and pompous dude who's completely closed down emotionally. After their breakup, he seems to spend weeks sitting in a singles bar in bad leisure wear, narrating his woes to the air in semi-sociopathic fashion. That's where Jacob, who possesses a seemingly infinite wardrobe of perfectly tailored designer threads and goes home with a different woman every night, takes pity on him. The problem, Jacob assures Cal, is the Supercuts 'do and the jeans from the Gap and the bad suit that's at least a full size too large. That, and the fact that Cal talks about himself too much (i.e., at all) and that he sits there sipping his drink through the stirring-straw, "like you're sucking on a tiny shvantz." (There are a handful of clues that Jacob is supposed to be Jewish, such as his name and almost everything he says. I know this isn't the first time that the Canadian-born, Mormon-raised Gosling has played a Jewish character, but the last one also happened to be a neo-Nazi.)

I feel pretty tolerant toward "Crazy, Stupid, Love." because it gets better and funnier after a labored and lumbering start, which is entirely the opposite of most Hollywood comedies. There's a subplot involving Stone's aspiring lawyer character and her insufferably nerdy boyfriend that doesn't seem to be going anywhere, but when her role in redeeming both loserish Cal and misogynistic Jacob is revealed, the payoff is pretty decent. Then there's the teenage babysitter (Analeigh Tipton) who tries to send Cal naked pictures, and Marisa Tomei as the hot but insecure schoolteacher who becomes Cal's first conquest under Jacob's tutelage, with disastrous consequences. A cheerful, inspiring, up-with-people summer comedy? Definitely not. But if you're open to a riotous, semi-coherent spectacle that veers from pure glossy cynicism to flat-out romantic sentimentality, then the Movie With the Damn Period in the Title might be your ticket to summer fun.