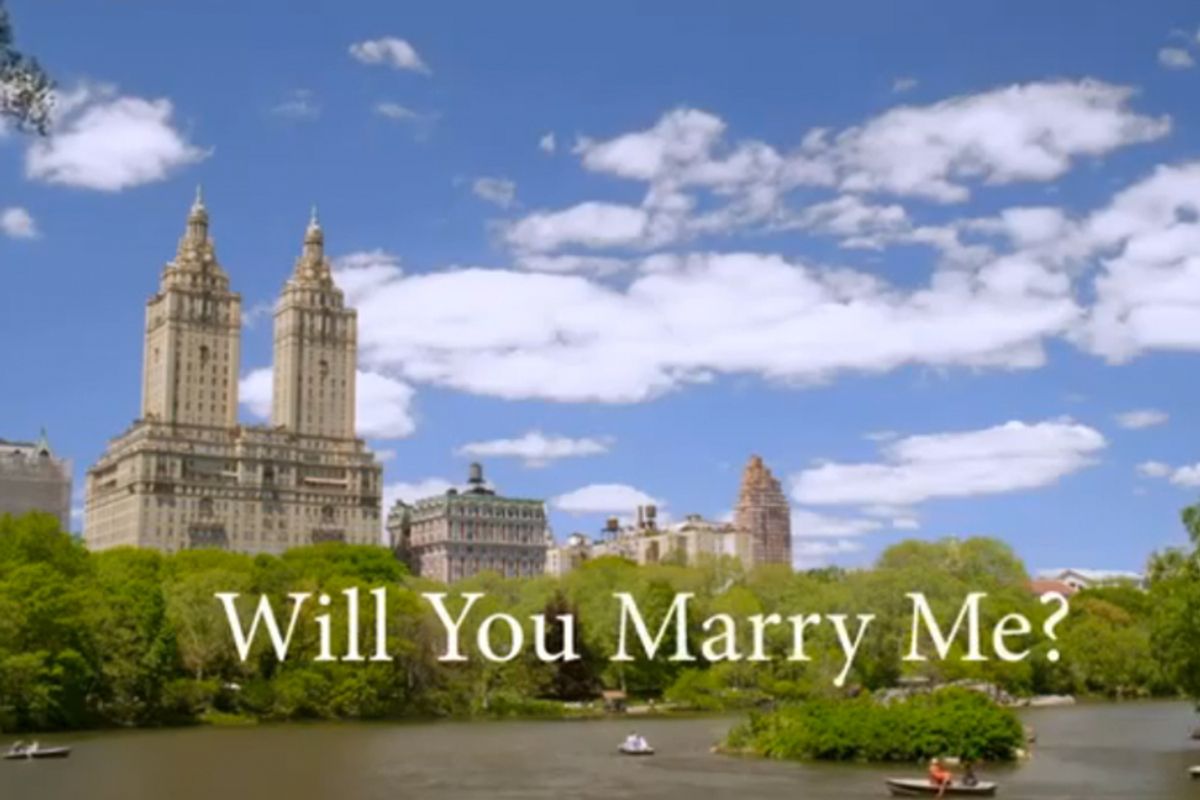 Diamonds have been having a bit of an image problem in recent years, what with their starring role in all those bloody African conflicts, and in high-profile stories like Naomi Campbell's appearance at Charles Taylor's war crimes trial over a gift of alleged "conflict diamonds." Thank God Tiffany & Co. is here to remind us that in the right hands, sparkly carbon is still part of "what makes love true." Isn't it romantic?

In a campaign designed to warm the cockles of your heart and drain the retirement funds from your bank account, the venerable jeweler has created a new campaign centered around the most glamorous city in the world. And Edward Burns, the guy who 15 years ago was America's bright indie filmmaking hope, is on board with a tale of "romantic and witty stories of proposals from New York City couples." In other words, a six-and-a-half-minute rip-off of the less annoying part of "When Harry Met Sally," a movie that was itself a rip-off of everything Woody Allen has ever done. And while the meet-cute stories of an ethnically diverse array of gay and straight couples may do wonders to sell "the most beautiful" engagement rings, they're one a hell of a pitch for couches.

The Tiffany's campaign is full of other little jewels as well. There's a free download of the whitest version of "You're The First, The Last, My Everything" you've ever heard outside of the Whiffenpoofs, and a list of "Tiffany's Tips" for "When Love Gets Serious" that runs from obvious to antiquated. "Ask The Father Of The Bride," says Tiffany's. "The modern young man who ignores this wonderful piece of etiquette displays an alarming lack of civility." If it's a beloved tradition, great. But forget the possibility that you're a gay couple, or said bride's pops might not be in the picture -- how about just, in America in 2011 a grown woman no longer needs a man's permission to marry? Then there's Rule 15: "Say au revoir to old flames. Period." Really? I recommend no longer having sex with them, but heck, I've seen ex-husbands in receiving lines, and bridal parties composed largely of former boy- and girlfriends. Just because you weren't not meant to spend your life with a person doesn't mean he or she should be iced out of the picture permanently.

But of course, all these love stories and little tips aren't the point. They're just there in service of Rule 30, the big one. "Ah, The Ring," swoons the Tiff. "A diamond engagement ring is the traditional symbol of true love and lifetime commitment... Remember, over a lifetime a woman looks at her ring a million times." And some of those times aren't even when she's picking up her phone or getting a mani-pedi.

Tiffany's, of course, is a company whose raison d'etre is selling diamonds, which means it's in the business of selling dreams. That's why they know how to lay it on so thick. You can't move rocks with divorce statistics or the latest unemployment rates. And while a $10,000 single-carat princess cut may be forever, love and life don't grant such great odds.

Yet despite the often crushing realities of the world, people still want to believe. Isn't that why, amazingly, people are still watching "The Bachelor"? Isn't that why we New Yorkers were so jubilant this week, when gay and lesbian couples were able for the first time to exchange vows? Isn't that why campaigns selling "true love" get made? Because as much as everybody loves a happy ending, there's something almost unfairly seductive about the notion a of happy beginning -- and the expensive fantasy that a whole lovely lifetime could be lurking within one tiny blue box.