Pick of the week: Real-life crime drama "The Interrupters"

Pick of the week: Ex-gangbangers battle youth violence in the stereotype-shattering documentary "The Interrupters" 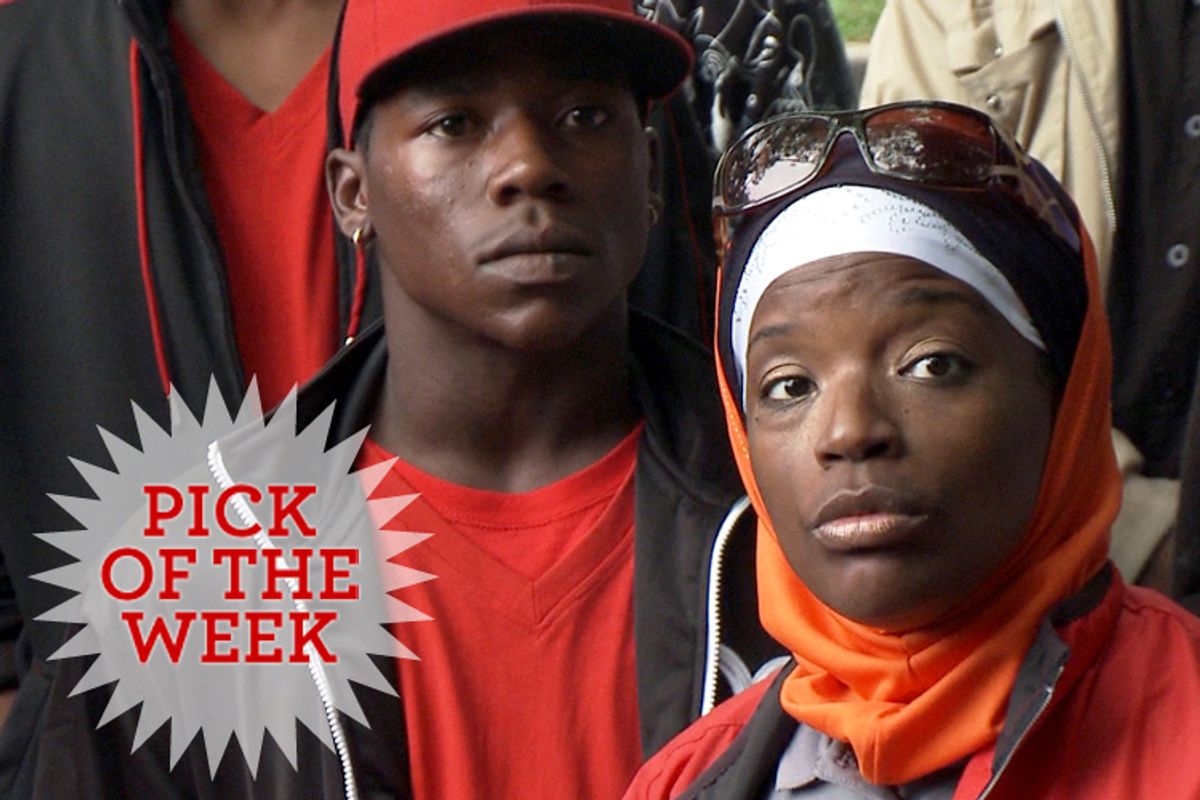 A still from "The Interrupters"
--

Maybe two-thirds of the way through Steve James and Alex Kotlowitz's amazing documentary "The Interrupters," we watch a soft-spoken former Chicago gang member named Cobe Williams stage a high-risk intervention with an extremely angry young man, who at first seems like a virtual stereotype of an inner-city street thug: dreadlocks, baseball cap, coded gang colors, baggy jeans worn low to display several inches of his boxer shorts. This guy has a complicated beef with somebody who he believes ratted him out to the cops, who in turn broke down the door of his house and handcuffed everybody inside, including his mother. He's got a pistol tucked in those baggy jeans and is going out to find the supposed informer. He doesn't care what happens, he tells Williams; if he goes to prison or gets killed himself, God will provide for his family.

It's like a gripping, can't-turn-away dramatic scene from a David Simon cable series, "The Wire" or "Treme," except that nobody is acting and this dude completely intends to go shoot someone. After Williams gets the guy somewhat calmed down and takes him for a ride -- minus the gun and, eventually, minus the blunt he's also packing -- he gets very quiet and reflective, which might not be what we're expecting. All the time he's spent with "gangbangers and gunslingers," he says, has done him no good. All his old friends are in prison or are drug addicts "or whatever," and we suspect we know what "whatever" means. The only other option is to become "one of the people who tell the story," and that's what he wants to be. It's a moment of startling clarity and insight -- and unlooked-for, almost impossible hope -- in a stereotype-shattering movie that's full of them, and one that may permanently change the way you think about violent crime in America. And to get a little more concrete about it, it seems very likely that Cobe Williams saved somebody's life that day.

That's not even one of the scenes in "The Interrupters" that will reduce you to tears, at least not as much as some others do. Wait till you see a handsome teenager known as Li'l Mikey, who has just served two-and-a-half years in the state penitentiary and has come out determined to turn his life around, and even to return to the barbershop he robbed at gunpoint to offer his apology to the family he terrorized. Or the scene when Caprysha, a parentless teenage girl with a long criminal history and evident emotional and psychological problems, earns her high school diploma, thanks largely to the stern mentoring of Ameena Matthews, a ferocious Black Muslim firebrand and a colleague of Williams' at an organization called CeaseFire Chicago. When Caprysha tells Matthews that she wants to become a pediatrician, at first your heart breaks because the odds against that happening are much, much greater than Caprysha can imagine. And then your heart breaks because: Why the hell not? If a poor black girl from the Chicago projects with a criminal record can't aspire to becoming a doctor, then what's the point of this damn country anyway? (Please don't answer that.)

James is a veteran documentary director who shot "Hoop Dreams," by far his best-known film, 15 years earlier in some of these same Chicago neighborhoods. Kotlowitz, his co-producer and collaborator, is a journalist and author known for his nonfiction works about poverty and race, including the books "There Are No Children Here" and "The Other Side of the River." They spent a year following Ameena Matthews, Cobe Williams and a slight, scholarly-looking Latino guy named Eddie Bocanegra, all of them "violence interrupters" for CeaseFire Chicago who try to defuse street conflicts in intimate, face-to-face fashion. The organization was founded by University of Illinois epidemiologist Gary Slutkin, partly to explore the controversial notion that criminal violence spreads through a society in epidemic fashion, just as contagious diseases do. Indeed, Slutkin even suggests that violence is a disease (albeit not one caused by a microorganism), and that interrupting its transmission from person to person can slow down or defeat the epidemic, just as the use of condoms can stop the spread of HIV.

You don't have to endorse that idea to appreciate that the interrupters hired by Tio Hardiman, the avuncular hardass who runs the intervention program, are actually doing something about inner-city youth violence, unlike virtually everybody else in our society. If law-and-order conservatives seek to address crime with stiffer sentences and ever more prison cells, which cosmetically reduce crime statistics at the cost of long-term social devastation, liberals often insist that nothing can be done about crime unless something else -- unemployment or inequality of education or the fractured African-American family -- gets fixed first. CeaseFire essentially takes the position that violence is both a cause and a symptom of social dysfunction, and that every time Matthews or Williams or Bocanegra gets in somebody's face and stops a shooting, it's another step toward a more normal society.

James crafts intimate portraits of his three subjects and also captures the difficult, dangerous and often surprising dynamics of their world. Chicago experienced a wave of youth violence during the year "The Interrupters" was shot, capped by the notorious murder of a high school student named Derrion Albert in September of 2009, captured in a horrifying video that quickly became a worldwide sensation. At a time when overall crime in America remains low (at least in relative historical terms), Chicago's black and Latino neighborhoods are often depicted as zones of open warfare. The grieving families of 15- and 16-year-old murder victims, and the sidewalk memorials bedecked with teddy bears and balloons and scrawled messages, are undeniably hard to take. Furthermore, they stand as a rebuke to our convenient tendency to dehumanize urban violence, to view it as a dreadful pathology and willfully forget the fact that each of those deaths is experienced by a real family. Yet in this landscape of permanent trauma, what the interrupters find, time and again, is young people who are eager for alternatives, and virtually starving for advice and mentorship from wiser heads who can speak their language.

Sociologists have known for decades that people who commit crimes or engage in antisocial behavior generally share the values of the larger society, and often don't approve of their own conduct. People raised in a culture of cyclical violence may believe that it's necessary to survival or to honor because it's the only model they've ever seen; the interrupters offer near-term pragmatic options and, perhaps more important, stand as potent examples of the fact that other pathways are possible. I don't know whether Ameena Matthews has any plans to run for office -- conventional wisdom might hold that a Black Muslim woman with a criminal record has a limited political future -- but she's got my vote, whether it's for president or dogcatcher or something in between. A charismatic and highly intelligent woman whose father is the legendary Chicago gang leader Jeff Fort, Matthews can bring an intimidating street presence when needed and has an intriguing dual or triple identity: inspirational community leader and orator, tough-as-nails guidance counselor, loyal Islamic wife and mother with a quiet home life.

If Matthews is the obvious superstar of "The Interrupters" and the calm, bearlike Cobe Williams should clearly be employed to settle international disputes or outbreaks of tribal violence, Eddie Bocanegra at first seems like another story. A cheerful, reed-thin guy with glasses and jug ears who teaches art therapy to middle-school kids and comes from a Mexican immigrant family that verges on the middle class, he doesn't appear to belong with the prison-yard philosophers and one-time gang leaders of CeaseFire. But the more time James spends with Bocanegra, the more you understand that he is literally haunted by ghosts, and that he so often visits grieving families of murder victims because of the crime in his own past that he can't forgive himself for, and perhaps shouldn't. "The Interrupters" is a great work of drama that happens to be real, a Russian novel about crime and repentance set on the real-life streets of 21st-century America. You won't see a movie this year that is more moving, more tragic, more upsetting, more hopeful or more necessary.

CORRECTION: On first publication, this review identified Tio Hardiman as an "ex-gangbanger." According to Hardiman, he was never a gang member. Salon regrets the error.