"The Guard": Heard the one about the black FBI agent and the Irish cop? 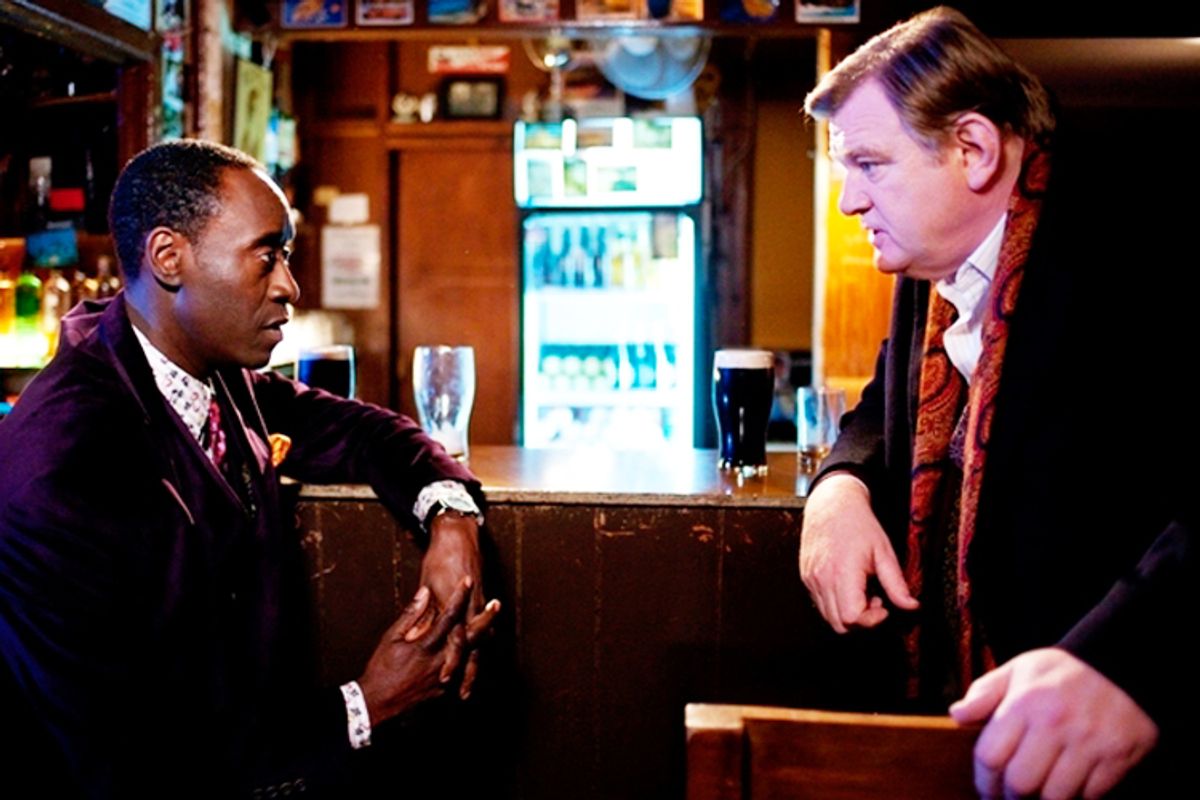 Don Cheadle and Brendan Gleeson in "The Guard"
--

It's an insanely crowded week at the movie theater, with more decent options than is normal for this time of year, but I wanted to spare a shout for the enjoyable if miscellaneous Irish comedy "The Guard," with Don Cheadle and Brendan Gleeson as an unlikely cop duo. Mixing a leg-pulling social satire set in the rural west of Ireland with a Tarantino-inflected crime drama, "The Guard" marks the directing debut of John Michael McDonagh, whose brother is the better-known filmmaker and playwright Martin McDonagh ("In Bruges"). This McDonagh has something of his brother's ear for crackling dialogue and eye for detail, but most of all he's got Gleeson, arguably Ireland's greatest living actor, as the complicated, devious and finally heroic Sgt. Gerry Boyle.

Boyle is the lone wolf, Dirty Harry-style lawman of Connemara in County Galway, a proud and insular region where many people don't speak English (or, more accurately, choose not to) and don't willingly offer information to cops. ("Guard" is Irish parlance for cop, drawn from the Gaelic word "Garda.") As Boyle jokes to visiting FBI agent Wendell Everett (Cheadle), it's more like Compton than you might think at first. Boyle's quasi-racist or mock-racist needling of Everett -- "I t'ought only black boys was drug smugglers?" he asks, in his best bogland accent -- is meant to get under the straitlaced Yank's skin, but in fact Boyle is neither a bigot nor an idiot. He's a prickly country cop, and quite a good one, who wants to be left alone by Dublin bureaucrats and jargon-spouting Americans, and of course it will take him and Everett most of the movie to figure out that they're on the same side.

Everett has come to Ireland in the first place because the FBI has lost track of a huge shipment of Colombian cocaine that's now controlled by a trio of thugs headed by Liam Cunningham, who plays his crime lord as a preoccupied Dublin businessman obsessed with philosophy. Admittedly a carload of criminals driving around the Irish countryside discussing Nietzsche is veering really hard into Tarantino turf, but I wasn't expecting to hear Bertrand Russell enter the conversation, and full marks to McDonagh for that. Throw in a gay fellow guard with a gorgeous Croatian wife, a gruesome murder scene with "Se7en"-esque religious overtones, some strippers, the gorgeous Connemara scenery and a general air of venality and corruption and Guinness, and it's a nifty little Irish summer vacation.

"The Guard" is now playing in New York and Los Angeles, with wider national release to follow.