The volatile star's character may be deceased, but Sheen's got a winning, and familiar, new incarnation 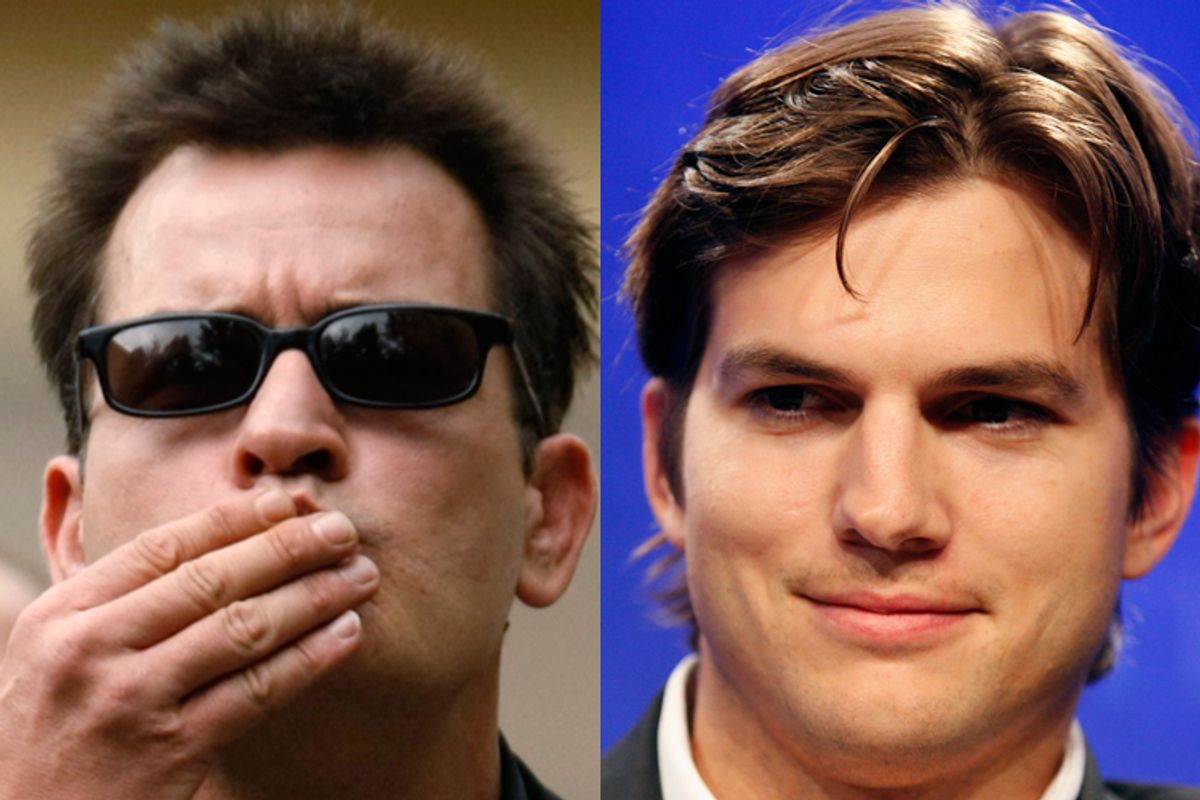 Does CBS really want to kill Charlie Sheen? It's been months now since the tempestuous warlock rock star and reliably incoherent tweeter finally pushed his luck too far with his network overlords and was fired from his long-running, wildly overpaid gig as star of "Two and a Half Men." And ever since, speculation has been running high that his fed-up former creative team, led by the show's creator, Chuck Lorre, has been planning to give Sheen's character, Charlie Harper, a big -- and unmistakably final -- send-off for the season premiere.

With the show going into production this week and just a few weeks to go before the season premiere airs, though, the network has been doling out only the smallest of clues regarding the fate of Harper -- and how the replacement member of the trio, Ashton Kutcher, will be introduced. But CBS head of entertainment Nina Tassler noted at a press conference this week that the remaining cast are "very nuanced actors who can cover every subtlety," and that Lorre has the ability to turn the comedy "on its ear and … become a one-act play, a drama." Sounds like code for "dead Sheen" to me!

Adding credible fuel to the rumors, this week Deadline "confirmed" that the show's two-part season premiere will open with the funeral of Charlie Harper. It will then allegedly have the characters trying to sell off Charlie's house, and introduce Kutcher's character, an "Internet billionaire with a broken heart." A dead main character, his grieving brother and nephew, and a new guy who's heartbroken? Wow, that sounds about as funny as an episode of "Two and a Half Men."

Much is riding on the new season of the venerable sitcom, which has been a consistent ratings powerhouse since it premiered eight years ago. But will audiences, who tuned in to see bad boy Sheen misbehave as bad boy Harper, stick around for the adorable, socially conscious Kutcher?  Back in April Sheen sent out an open letter to Lorre claiming that "No one cares about your feeble show without me."

The dude may be crazy, but he may also be right. Sheen's fiercely loyal cadre of WINNING commenters have been posting up a storm on sites like Deadline and the Los Angeles Times, stating repeatedly that "Two and a Half Men" is now, much like Sheen's character, "dead to me." "I’ll watch the train wreck created by Chuck Lorre's ego then move on to something else," wrote one typical fan of the show, proving it's possible for someone to entertain a thought regarding "ego" and "Two and a Half Men" without invoking Sheen.

Whether he's dead or not in the Chuck Lorreverse, Sheen remains very much alive as a commodity. He's signed to do a new sitcom for Lionsgate called "Anger Management," loosely based on the mediocre Adam Sandler and Jack Nicholson film of the same name, where he'll get to play, in his words, "a guy with serious anger management issues." And though CBS's Tassler demurely notes, "He’s moved on," fortunately for his fans, Sheen's staying exactly where he's most comfortable -- mad as hell.