"Rise of the Planet of the Apes": Can James Franco make peace with chimps?

Never mind the star's flat performance in this reboot prequel; Andy Serkis is awesome as our future ape ruler 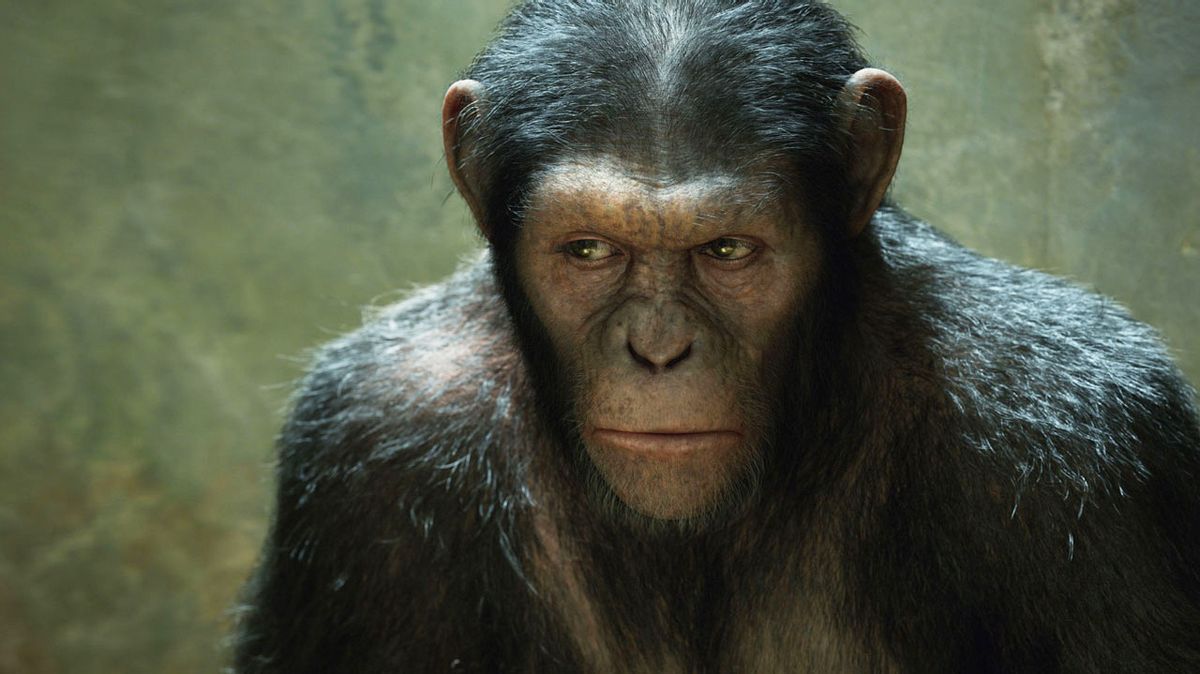 A still from "Rise of the Planet of the Apes"
--

So I guess this is James Franco's new hipster performance-art career strategy, post-Academy Awards edition: Disappear behind an ape mask in an August B movie. No, I know, I know -- that's not actually Franco in the prosthetic/animatronic/digital/motion-capture/whatever get-up as Caesar, the genetically juiced-up chimp who becomes the leader of a simian rebellion in "Rise of the Planet of the Apes," a curious attempt to re-reboot the venerable sci-fi franchise. That would be Andy Serkis of Gollum fame, midway through one of the strangest Hollywood acting careers since Peter Lorre's, who damn well steals the whole movie as the charismatic ape genius.

My point is that Franco, although he's the putative star of "Rise of the Planet of the Apes," might as well not be in the movie at all. Neither his ample charm nor his acting chops are much in evidence, and his character, Will Rodman, a research scientist for a San Francisco pharmaceutical firm who develops a miracle Alzheimer drug with unforeseen side effects, is an utterly generic science-fiction protagonist who could have been played by your average Canadian-via-L.A. casting-call hunk with the right jawline and clear vocal delivery. Never mind original "Planet of the Apes" star Charlton Heston, who for better or worse was always a distinctive screen presence; in this movie Franco seems to be channeling somebody like James Franciscus, who starred in 1970's "Beneath the Planet of the Apes," the second film in the series. (That would be the one in which the entire world is destroyed -- whoops! Spoiler alert!)

I mean, the guy is actually called Will Rodman, for God's sake, which speaks to why I kind of enjoyed "Rise of the Planet of the Apes" despite its evident silliness and the fact that nobody's likely to remember it three weeks from now. It may seem obscene to refer to a movie with a reported budget of $90 million as a B picture, as I did earlier. But director Rupert Wyatt, writers Rick Jaffa and Amanda Silver, and quite likely Franco too, seem devoted to recapturing or updating the high-camp, drive-in intensity of the original "Apes" films (which were also mid- to high-budget productions, thanks to all the complicated makeup and sets). Maybe I'm grasping for redemption amid a fundamentally mediocre film, but I detect a level of deep-game postmodernism to the straightforward and unironic sci-fi plot of "Rise of the Planet of the Apes." The screenplay never winks at the audience (or hardly does) and the actors play the archetypal characters -- flawed but noble scientist, concerned girlfriend, greedy corporate executive, sadistic ape handler -- completely straight. But apparently none of these people have ever seen this kind of movie before, and are utterly baffled when their Faustian bargain goes bad.

This movie does not fit into the internally inconsistent time-paradox narrative of the 1968-73 "Apes" franchise (because nothing could) and, thankfully, has nothing to do with the 2001 Tim Burton "Planet of the Apes" remake (which made a mysteriously large amount of money, considering its terribleness). Instead it's an attempt to reboot the entire franchise from scratch, beginning with the 21st-century events that will presumably lead to the downfall of human civilization and the ascendancy of our ape overlords. I'm surely not the only viewer who rooted for Serkis and his fur-covered mates the whole way through this movie, and indeed I suspect that Wyatt and his collaborators are counting on some of that. If Franklin J. Schaffner's 1968 original -- which really is pretty terrific -- and its muddled sequels came heavily laden with civil rights-era racial symbolism, then "Rise of the Planet of the Apes" is trying to cash in on species-level planetary anxiety. Sure, we elected a black guy as president (and look how well that's been going!), but given the global scale of economic inequality and ecological catastrophe, maybe some other form of animal life should get a turn running the place.

Wyatt is a British director who makes his first Hollywood foray here with mixed results, but "Rise of the Planet of the Apes" starts with a literal bang. We see a female chimp captured in Africa, shipped to California and injected with Rodman's Alzheimer-killing virus, whereupon she becomes wily enough to craft an ingenious escape, burst into the evil pharmaceutical company's boardroom and be shot dead by a security guard. Unbeknown to the company's shark-suited, smooth-talking head (played by David Oyelowo, and I guess making the villain both black and English communicates some 21st-century-ness), Rodman rescues the chimp's unborn baby, a male who displays prodigal tendencies from birth. This of course is Caesar, played at different times by a high-tech puppet, a digital effect and by Serkis in a chimp suit, and in all guises he's the most compelling character.

All the other actors and characters are simply following the script's inexorable progress from one plot point to the next, but Serkis/Caesar is continually making hurtful discoveries about the world and his stranger-in-a-strange-land role in it. There's a great scene when Rodman and his eye-candy girlfriend (a nothing role for Freida Pinto) take him to visit Muir Woods, an enclave of redwoods just north of San Francisco. (It isn't Muir Woods, of course; most of the film was shot around Vancouver.) On their way back to the car, Caesar has a hostile encounter with a German shepherd, and then refuses to get into the back of Rodman's Jeep Wagoneer. (Now, that hunk o' junk vehicle, all by itself = hipster affectation.) "Am I a pet?" he signs resentfully to Rodman, sliding into the back seat. "What is Caesar?"

Maybe the writers already knew about the Nim Chimpsky experiment of the '70s, but in any case there are odd parallels between this film and James Marsh's recent documentary "Project Nim." A chimpanzee is isolated from his own kind and raised by an arrogant, Pygmalion-esque scientist, who teaches him to communicate with humans but ultimately betrays his trust. Fortunately, Nim was a normal chimp, not a genetically engineered mutant more intelligent than humans, or else we'd all be his slaves now. Like Nim, Caesar is eventually sent to live at a gruesome facility for captive primates, where, embittered by prison life, he hatches a plan for simian society's Great Leap Forward to total planetary dominance.

Actually, these near-wordless scenes in ape jail, where Caesar gradually bends the facility's alpha chimp and resident gorilla to his will, and convinces them to rise up against the tyranny of their cruel and small-minded keeper (Tom Felton, aka Draco Malfoy from the "Harry Potter" series), are without doubt the funniest and most exciting portions of "Rise of the Planet of the Apes." A movie like this doesn't want too much nuance, and at least in this section Wyatt stops trying to convince us that humans aren't all bad and that apes aren't out for bloody revenge. See, overall Caesar is depicted as a triangulating moderate who just wants some kind of ape autonomous zone adjacent to human society, and to that I say yawn. What's the second movie going to be about? The internal dramas and workplace romances of a team of pot-smoking ape-human United Nations peacekeepers?

Wyatt stages a nifty and largely satisfying final showdown between rampaging apes and California Highway Patrol officers on the Golden Gate Bridge, but by that point the conflicted nature of "Rise of the Planet of the Apes" is causing real problems in the suspension-of-disbelief department. What I mean, I think, is that the original series began with such a patently ludicrous time-traveling, post-apocalyptic premise that plausibility became irrelevant, whereas this film begins in an all too boring present tense and never escapes it far enough. It's hard to tell what's tougher to swallow: the chain of unlikely coincidences that will supposedly end with the tiny and persecuted chimpanzee species supplanting ours at the top of the ecosphere, or the idea that this OK-but-forgettable late summer flick will launch a zillion-dollar movie empire.