The entertainer is out of the MDA telethon, and the show will never be the same 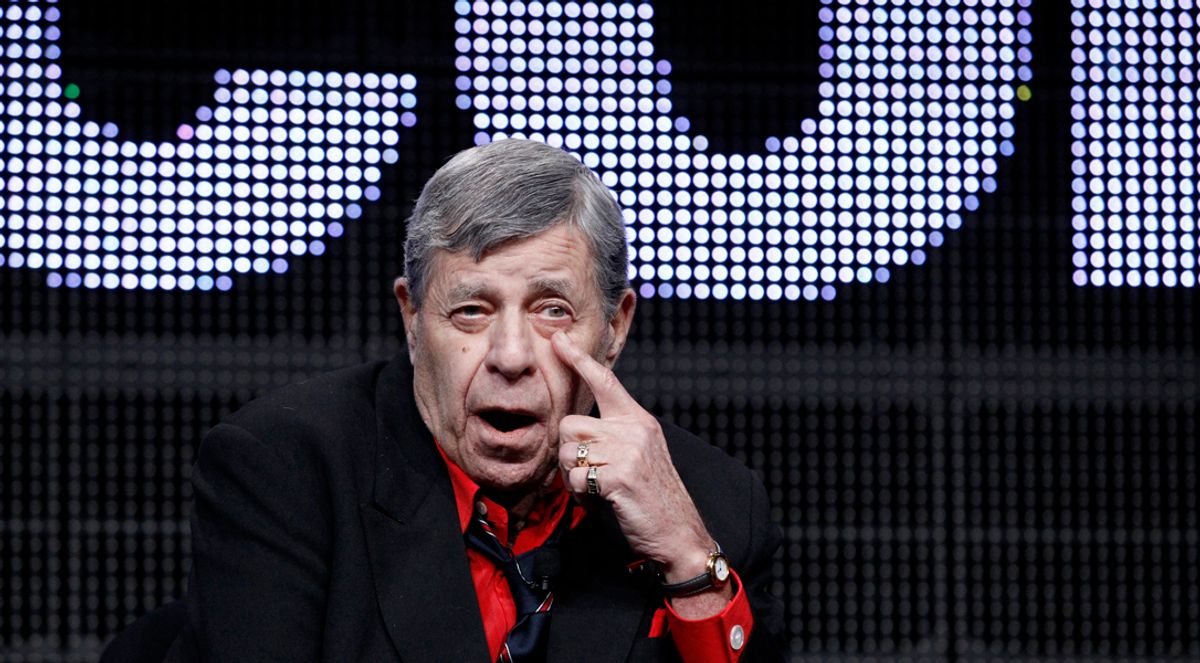 The Labor Day telethon as we've known it is over. Sure, we still have our PBS pledge drives, and those celebrity-studded fundraisers when terrible things happen to Mel Gibson's sex Jacuzzi.

But the up-all-night marathon, hosted by one bleary-eyed trouper with an undone bow tie, is now all but extinct. In May, Jerry Lewis announced that after giving it one more go in September, he'd be stepping down as host of the Muscular Dystrophy Association's Labor Day telethon. But on Wednesday evening, the MDA confirmed that Lewis is no longer the organization's national chairman, and that he won't be doing this year's broadcast. It'll be the first Jerry Lewis-free Labor Day since 1966.

The chairman of the MDA's board, R. Rodney Howell, called Lewis a "world-class humanitarian" in a statement Wednesday, adding "we're forever grateful to him for his more than half-century of generous service to MDA." The organization says that Lewis' telethons have raised a staggering $2 billion since their inception. Last year alone, it raised nearly $60 million.

At 85, the show's venerable host is certainly more than entitled to bow out. The entertainer has dealt with a number of serious health issues recently, including back problems, a heart condition and pulmonary fibrosis. Yet Lewis is still very much a show business force to be reckoned with. Last year, he industriously tried to mount and direct a Broadway musical version of his classic "The Nutty Professor." And this fall, the documentary "Method to the Madness of Jerry Lewis" will air on Encore.

That's why the cryptic handling of this announcement is so peculiar. Howell's statement said that Lewis had been "released" from his commitment. He didn't respond to further queries for comment. Lewis, likewise, has remained tight-lipped on the abrupt move. And at a critics' event in Los Angeles last week, Lewis responded to a question about this year's upcoming telethon with a terse "It is none of your business." I'd like to think Lewis is busy disgustedly planning a monster telethon for the national debt that will blow America's mind.

The MDA telethon, meanwhile, will go on with co-hosts Nigel Lythgoe, Jann Carl, Alison Sweeney and Nancy O'Dell. But without the man who calls children dealing with MD "my kids," it just won't be the same. It's always been Jerry's show, and as such has made for some memorable television -- from Lewis' Sinatra-orchestrated 1976 reunion with Dean Martin through dozens of dramatic, drum-rolled tote-board reveals though those exhausted, hoarse "You'll Never Walk Alone" finales. And the broadcast itself, once an epic, 21-and-a half-hour affair, will now be scaled to a modest, James Cameron-film length of six hours.

Times have changed. There are other ways to use charity to fight disease now. There are even more efficient ones, one that couldn't have been remotely imagined when Lewis donned a tux and picked up the microphone all those years ago. But there will never be another combination of schmaltz and sincerity of its kind again. And the word "telethon" without the words "Jerry Lewis" in front -- it's like "New Year's" without "Dick Clark." Inevitable? Yes. Hard to get used to? Absolutely.