Pick of the week: Rapturous 19th-century soap "Mysteries of Lisbon"

Pick of the week: "Mysteries of Lisbon" transports us into a gorgeous universe of adultery, betrayal, coincidence 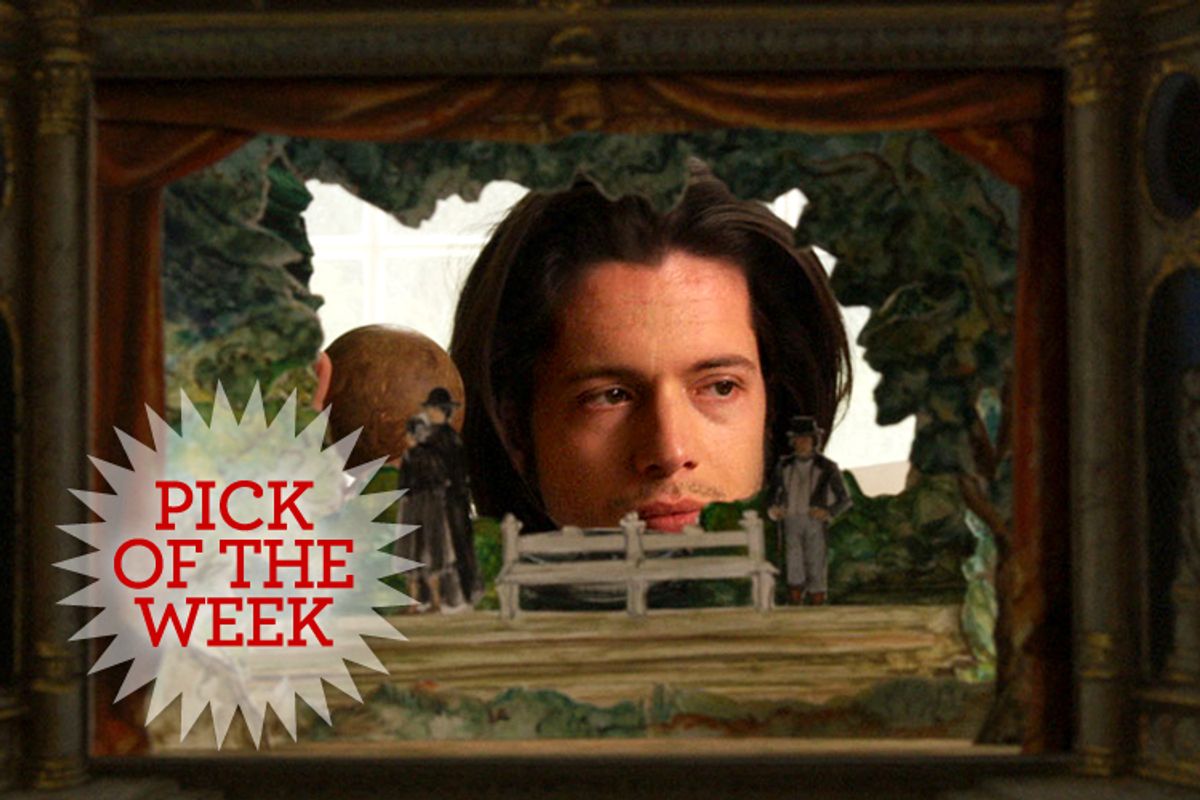 My first reaction, after spending more than four hours lost amid the seductions, betrayals, hidden identities and intersecting family histories of Raúl Ruiz's magnificent two-part film "Mysteries of Lisbon," was that I had to go learn Portuguese so I could read Camilo Castelo Branco's novel before watching the movie again. (If Castelo Branco's 1854 "Os Mistérios de Lisboa" has ever been translated into English, neither Amazon nor the New York Public Library has it.) Since that's not happening in this lifetime, I'll have to make do with repeat viewings of Ruiz's dense and intoxicating 19th-century soap, which is something like a mixture of Dickens, Balzac, French costume drama and Mexican telenovela.

I can hear some of you out there, right now, retreating to a reactionary pop-culture default setting. Oh, yes I can: A four-hour movie in Portuguese! Who is he kidding? Movies are supposed to be entertaining! Now that we've gotten that out of the way, can I remind you that long does not equal boring, and boring does not equal long? Maybe the period costumes and nested narratives and intellectual gamesmanship of "Mysteries of Lisbon" just aren't your thing, and I can't argue with that. But once you start to ride with the rapturous, gorgeous, digressive symphony of images and words and music in this film it's completely absorbing and unlike anything you've ever seen. I was never remotely bored by "Mysteries of Lisbon," and I wouldn't say that about "Thor" or "Green Lantern" or "The Hangover Part II" -- or, for that matter, "The Tree of Life." (Any sensible theater owner, to be sure, will split up the two halves of "Mysteries of Lisbon," and/or offer an intermission between them.)

If Castelo Branco, who is seen in Portugal as one of that nation's greatest novelists, is completely unknown in the English-speaking world, that's only a little bit less true for director Ruiz, a Chilean who has spent most of his prolific filmmaking career in France. He's been making features, documentaries and TV miniseries since the mid-'60s and is a venerated figure among French cineastes, who have sometimes compared him to Jean-Luc Godard and Luis Buñuel (meaning nothing, I think, beyond the fact that he's been around for a long time and is difficult to classify). But the only previous Ruiz film I can remember being released in American theaters was his lavish 1999 adaptation of Proust's "Time Regained," with Catherine Deneuve and John Malkovich.

One could describe "Mysteries of Lisbon" as splitting the difference between the opulent spectacle of "Time Regained" and the lower-budget TV dramas Ruiz made early in his career. (In fact, a six-hour version was broadcast on French TV, and if there is a God in heaven, as Ruiz's characters constantly assert, we'll see that on DVD eventually.) An austere and pictorial costume drama about a young man's search for his patrimony and its unexpected ripple effects, it's got all the gorgeous aristocratic houses, smashing gowns, duel-scarred rakes and manipulative beauties you could want. But Ruiz combines the older literary and theatrical traditions of French cinema with the stylistic and theoretical innovations of the New Wave like no one else, and he and screenwriter Carlos Saboga turn Castelo Branco's melodrama into a proto-postmodern intrigue of reflections and distortions, overheard dialogue and intercepted messages, voyeurism and deception. (I'm not claiming that stuff isn't in the book too, especially since I haven't read it and apparently can't.)

No plot summary can possibly do this episodic tale of unlikely coincidences and sudden reversals justice. After you've seen "Mysteries of Lisbon" you may need to sit down and draw yourself a diagram, and part of the fun of watching it is trying to hold onto the threads and find their points of intersection: How does this adulterous love affair connect to the last one? This beautiful woman used to be married to which wicked and domineering husband, and has tried to cover the traces of which illegitimate baby? Partway through the second half, I was all caught up in a sensitive but awkward Portuguese teenager's flawed attempts to win the favors of an elegant, somewhat older French countess, and it took me a while to realize that the kid was actually Pedro da Silva (Afonso Pimentel), the main character of the whole doggone movie, whom we'd veered away from into various nested divergent narrative some time ago.

Maybe that's forgivable, since at the beginning of "Mysteries of Lisbon" Pedro isn't called Pedro yet and is played by a different actor. Known only as João (João Luis Arrais), he's an adolescent orphan with no known family living in a religious school under the protection of stern but fatherly Father Dinis (Adriano Luz), who begins to drop hints about João's true parentage. Figuring out that his real mother is the shadowy aristocratic lady (Maria João Bastos) who shows up unannounced at odd moments, and that she's now married to the notoriously cruel and jealous Count of Santa Barbara (Albano Jerónimo), is the easy part. But it's as if unraveling that one secret begins to unravel the entire social fabric; penniless orphan Joao is revealed to be Pedro da Silva, bastard child of a clandestine high-society romance, and no one else in the interlinked worlds of the Portuguese and French nobility has a stable identity either.

After the fashion of Laurence Sterne or Diderot, Ruiz takes us into stories within stories and then other people's stories within those (with bits and pieces acted out by Pedro's puppet theater, which he takes with him everywhere). In order to explain the connection between Father Dinis, Pedro's increasingly ambiguous protector, and Elisa de Montfort (Clotilde Hesme), the vengeance-obsessed French countess with whom Pedro will later fall in love, we go backward several decades in time, to learn about two of Napoleon's soldiers who love the same woman, and who rescue a dashing colonel from the firing squad. Back in the movie's present tense (if there is such a thing), Elisa will send Pedro back to Lisbon to fight a duel for her honor with a mysterious ladykiller named Alberto de Magalhães (Ricardo Pereira). But do any of those people know what we already know, if we've been paying attention -- that long ago Alberto played a central role in Pedro's early life?

We see a horse thief buy an unborn baby from a murderer, a lowly criminal become a suave and celebrated gentleman, a servant girl elevated above her mistress, and a marquis reduced to a pauper. I can't count the number of times someone must beg someone else's forgiveness after learning a long-buried secret, or turns to God to heal a great sin or a tragic bereavement. As to whether Ruiz wants us to see all this aristocratic bodice-ripping and histrionic piety through an ironic or political lens, I would say he leaves that up to us. On one hand, he offers a cool and clinical portrait of a society based on ruthless deception and division, where the moneyed classes barely recognize their servants as human beings. On the other, he reminds us that the surface of social life is always a convenient fiction, and that what lies beneath it is chaotic and unpredictable. "Mysteries of Lisbon" offers no solution to the many mysteries of Pedro's existence, and even raises the possibility that his story and all the stories it enfolds are nothing more than a grand, fevered fiction. All of us, rich and poor, face that quandary every day, drawing on the marvels and tragedies of a past we don't really understand as we move into a future we cannot see.

"Mysteries of Lisbon" is now playing at the Elinor Bunin Monroe Film Center and the IFC Center in New York. It opens Aug. 12 at the Landmark in Los Angeles; Aug. 19 in Palm Desert, Calif.; Aug. 26 in Cambridge, Mass.; Sept. 16 in Philadelphia; Sept. 23 in Denver, San Diego, San Francisco and Washington; Sept. 30 in Minneapolis, San Jose, Calif., and Seattle; Oct. 7 in Santa Fe, N.M.; and Oct. 19 in Cleveland, with more cities and dates to be announced.

Movies Mysteries Of Lisbon Our Picks