"The Change-Up": Bateman, Reynolds buddy comedy gives us the willies 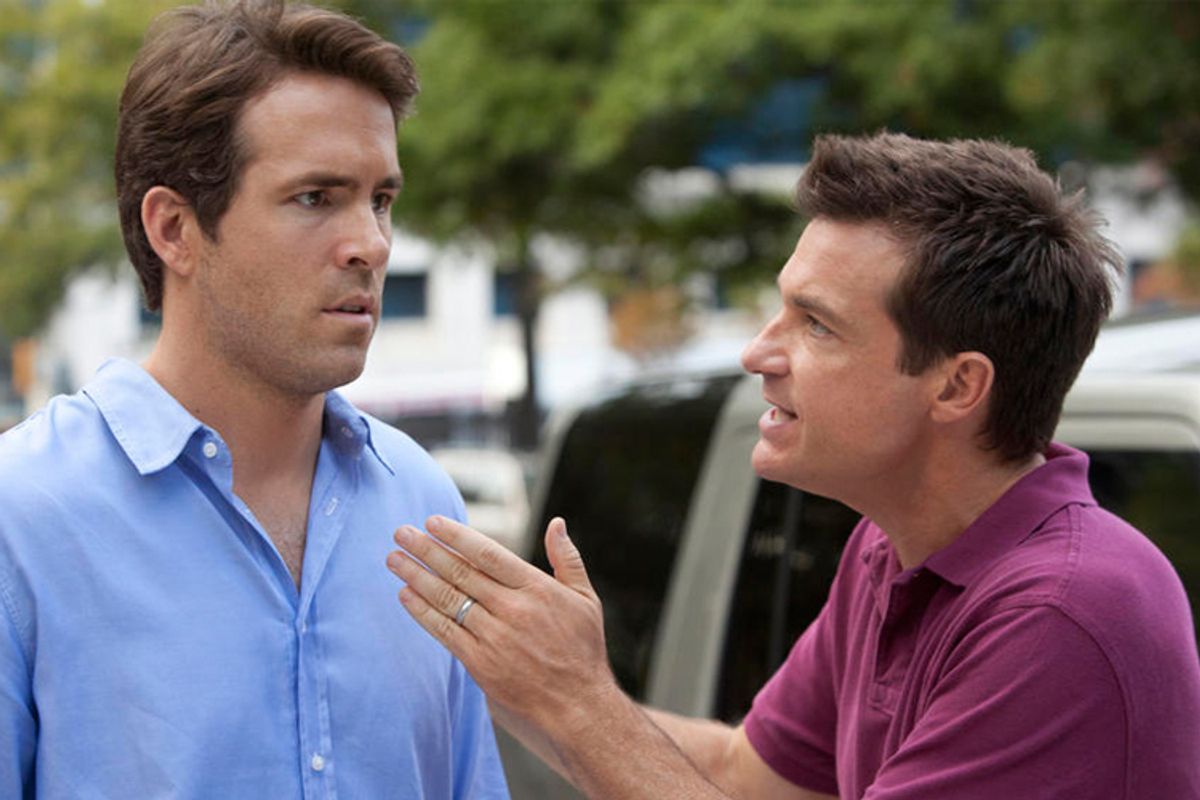 Ryan Reynolds and Jason Bateman in "The Change-Up"
--

Who can keep track of this summer's litany of nasty homosocial/homophobic/homoerotic comedies? I definitely can't. There was that one with Jason Bateman, that other one that didn't have Jason Bateman but probably should have, the other one that had Jason Bateman in a supporting role, and now "The Change-Up," which features Jason Bateman and Ryan Reynolds switching dicks. (I'm deliberately leaving out "The Hangover Part II," which is less like a movie than a magic ATM fueled by xenophobia.) OK, yes, that's unfair -- Bateman and Reynolds switch bodies, lives, dwellings and significant squeezes, "Freaky Friday" fashion. But the really important part about that, as this movie makes abundantly clear, is getting to check out another dude's schlong firsthand without it being, y'know, that kind of thing.

Zany, porny, dude-oriented comedy has rapidly turned into rom-com for guys in various different ways, none of them good. Like the romantic comedy, it superficially offers adventure and sexual independence, but ends up asserting monogamy and heterosexual marriage as the natural order of things. Furthermore, the genre became as ritualized and fossilized as the rom-com nearly as soon as it was invented, and with the summer market thoroughly glutted, consumers can't help but have trouble keeping them apart. I attended a private screening of "The Change-Up" on Friday afternoon, by which I mean that I bought a ticket at a strip-mall movie theater in upstate New York and nobody else showed up. I recognize that's a statistically meaningless sample, but it's not an encouraging one. (In answer to your next question, I asked, and yes, they still show the movie even if nobody's there to see it. Philosophy at work!)

Dude comedy is also like rom-com in that it's a lot easier to get it wrong than get it right, and it appears to recycle the same guys in approximately the same high-larious situations over and over again, with Bateman serving the all-purpose likable protagonist role once filled in rom-com by Jennifer Aniston. (Which is weird, because he's partly getting all these roles after totally stealing the show from Aniston in last summer's mediocre rom-com "The Switch," which will be permanently confused with this film based on title alone. I need to go to sleep right now.) Also, no one can ever decide what level of filth to go for in these movies; "The Change-Up" is the hard-R version, with loads of imaginative cursing, several pairs of breasts and a gag involving poop in the face, but no naked male peener (despite extensive discussion of same).

If you're sitting there patiently waiting for me to tell you something about this movie, like whether or not it's any good, let me frustrate you further by insisting that that depends on what you mean. Genial, beefcakey Reynolds and dapper, deadpan Bateman aren't terribly convincing as bosom buddies, but they make a nice comic pairing, even if they're much funnier playing "themselves" than in the often baffling and acutely painful portion of the film where each is playing the other. As they realize after the big magic switch -- accomplished by a urine-activated goddess in a downtown Atlanta fountain, and you only wish I were kidding -- Dave, Bateman's character, is a corporate tool while Mitch, Reynolds' character, is an unrepentant frat-boy douchebag. When Dave's adorable daughter, age 6 or so, asks Mitch if he's coming to her dance performance he tells her, "Sorry, honey. The only form of dancing Uncle Mitch enjoys involves a shiny pole and a broken woman with daddy issues." You have to admire the repellent level of effort put in by director David Dobkin ("The Wedding Crashers") and writers Jon Lucas and Scott Moore (the first "Hangover") in trying to make Ryan Reynolds say that line convincingly. Or, on the other hand, perhaps you don't.

The hits keep right on coming. When Dave asks Mitch for his girlfriend Tatiana's last name, the latter replies: "I don't know. Tatiana Calls-Me-Up-at-Three-O'Clock-in-the-Morning-and-Wants-to-Fuck-stein." I will admit that one made me laugh, as did the list of imaginary sexual positions Mitch and Tatiana engage in, which include the Arsenio Hall, the Lonesome Dove and the Wolfgang Puck. I'm not super-proud of laughing at those jokes, but the whole point of a movie like this is to make you feel a little dirty, like hooker-at-a-convention dirty, and then feel redeemed by the end, like you went home to your wife and she pretended not to notice that you reeked of chain-store perfume. And remember -- I was sitting there all alone in that theater! Somebody had to show a little love for my hardworking brothers up there on the screen.

Can we stop now? No? So Dave and Mitch pee in a fountain and accidentally wish for each other's lives, whereupon Mitch's jackass personality is transported into the life of a corporate attorney who never comes home for dinner, while uptight Dave gets to act in a "lorn" film (that supposedly means "lite porn") whose director tells him, "You put thumb up nice lady butthole, or I put fist up yours." As I say, it's occasionally funny and a lot painful: Bateman (as Mitch, inhabiting Dave's body) dropping F-bombs and calling Dave's daughter's ballet rivals "bitches" and generally not giving a damn, and Reynolds (as Dave, vice versa) acting kinda uneasy and girly and refusing to get it on with Olivia Wilde, as the least lawyerly lawyer of all time. (Leslie Mann is also in the movie as Dave's hot wife, but Mitch-as-Dave won't have sex with her because -- never mind, you really don't want to know.) Important life lessons are learned, along totally predictable lines: Women are shallow, needy, whorish and/or prim, but wind up subjugating us anyway. And after a great deal of commentary, all wangs are restored to their rightful owners.