Slouching toward a double-dip, for no good reason 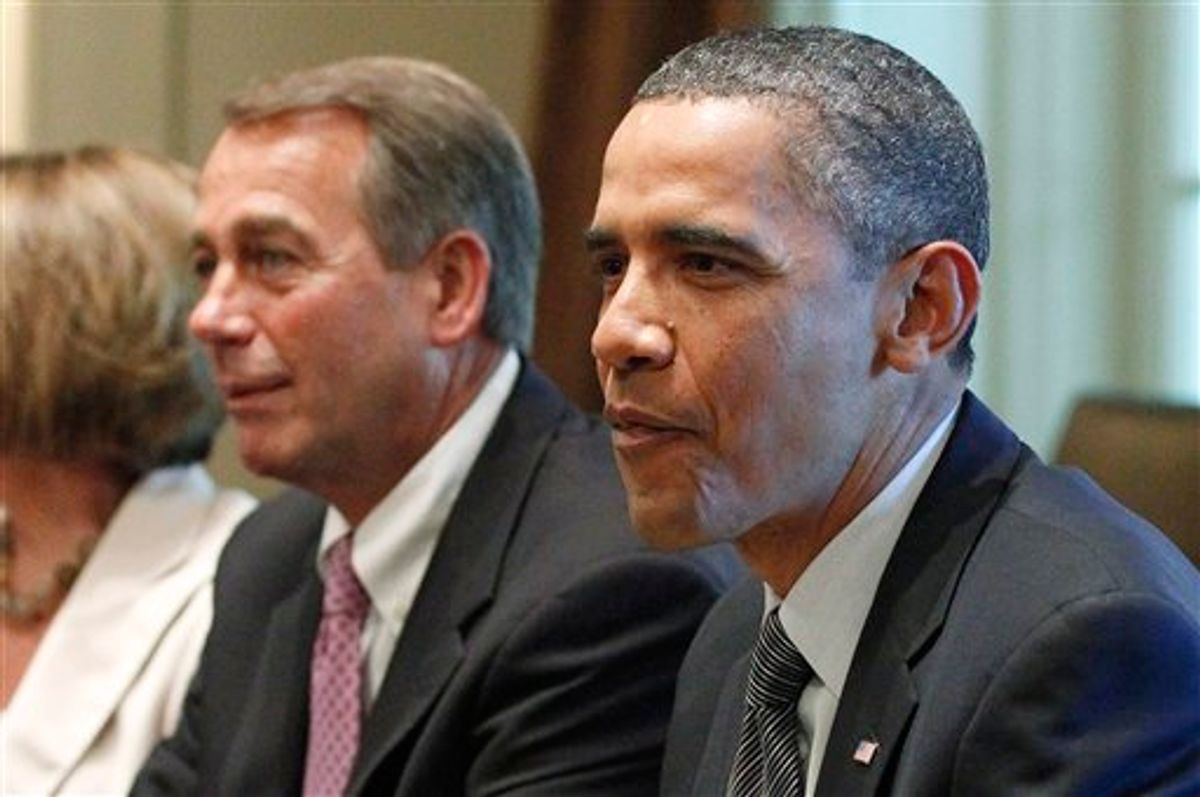 President Barack Obama and House Speaker John Boehner of Ohio, take part in a meeting in the Cabinet Room of the White House in Washington, Thursday, July 14, 2011, with Republican and Democratic leaders regarding the debt ceiling. (AP Photo/Charles Dharapak) (AP)
--

Imagine your house is burning. You call the fire department but your call isn't answered because every firefighter in town is debating whether there will be enough water to fight fires over the next 10 years, even though water is plentiful right now. (Yes, there's a long-term problem.) One faction won't even allow the fire trucks out of the garage unless everyone agrees to cut water use. An agency that rates fire departments has just issued a downgrade, causing everyone to hoard water.

While all this squabbling continues, your house burns to the ground and the fire has now spread to your neighbors' homes. But because everyone is preoccupied with the wrong question (the long-term water supply) and the wrong solution (saving water now), there's no response. In the end, the town comes up with a plan for the water supply over the next decade, but it's irrelevant because the whole town has been turned to ashes.

OK, I exaggerate a bit, but you get the point. The American economy is on the verge of another recession. Most Americans haven't even emerged from the last one. Consumers (70 percent of the economy) won't or can't spend because their major asset is worth a third less than it was five years ago, they can't borrow as before, and they're justifiably worried about their jobs and wages. And without customers, businesses won’t expand and hire. So we're trapped in a vicious cycle that's getting worse.

But the government won't come to the rescue by spending more and cutting most peoples' taxes because it's obsessed by a so-called "debt crisis" based on budget projections over the next 10 years. That obsession -- which serves the ideological purposes of right-wing Republicans who really want to shrink government -- has even spread to the eat-your-spinach media, deficit hawks in the Democratic Party, and a major (and thoroughly irresponsible) credit-rating agency that's neither standard nor poor.

Meanwhile, some lazy (or misinformed) commentators are linking our faux debt crisis to Europe's real one. But the two are entirely different. Several European nations don't have enough money to repay what they owe their lenders, or even pay the interest. That's threatening the entire eurozone.

But there's no question that the United States has enough money to pay what it owes. We're the richest nation in the world and we print the money the world relies on. The only question on this side of the pond is whether Tea Party Republicans will allow America to pay its bills when the debt-ceiling fight resumes at the end of 2012.

Europe is scared of what's happening in the United States -- but it's not America's faux "debt crisis" that's spooked them. It's the slowdown here (and the likelihood of another recession), made all the worse as our debt obsession prevents the U.S. government from doing what it should. A slowdown and recession here mean fewer exports from Europe to America. When combined with their genuine debt crisis, this could push Europe's economy over the edge.

The most important aspect of policymaking is getting the problem right. We are slouching toward a double dip because we're getting the problem wrong. Despite what Standard & Poor's says, notwithstanding what's occurring in Europe, and regardless of U.S. budget projections years from now -- our current crisis is jobs, wages and growth. We do not now have a debt crisis.

Every time you hear an American politician analogize the nation's budget to a family budget (as, sadly, even President Obama has done), you should know the politician is not telling the truth. The truth is just the opposite. Our national budget can and should counteract the shrinkage of family budgets by running larger deficits when families cannot.

Americans are more frightened, economically insecure, and angrier than at any time since the Great Depression. If our lawmakers continue to obsess about the wrong thing and fail to do what must be done -- and they don't explain it to the nation -- Americans will only become more fearful, insecure and angry.

We are slouching toward a double dip, with all the human costs that implies. We don't have to be. That is the tragedy of our time.