The right's non-reaction to the London riots 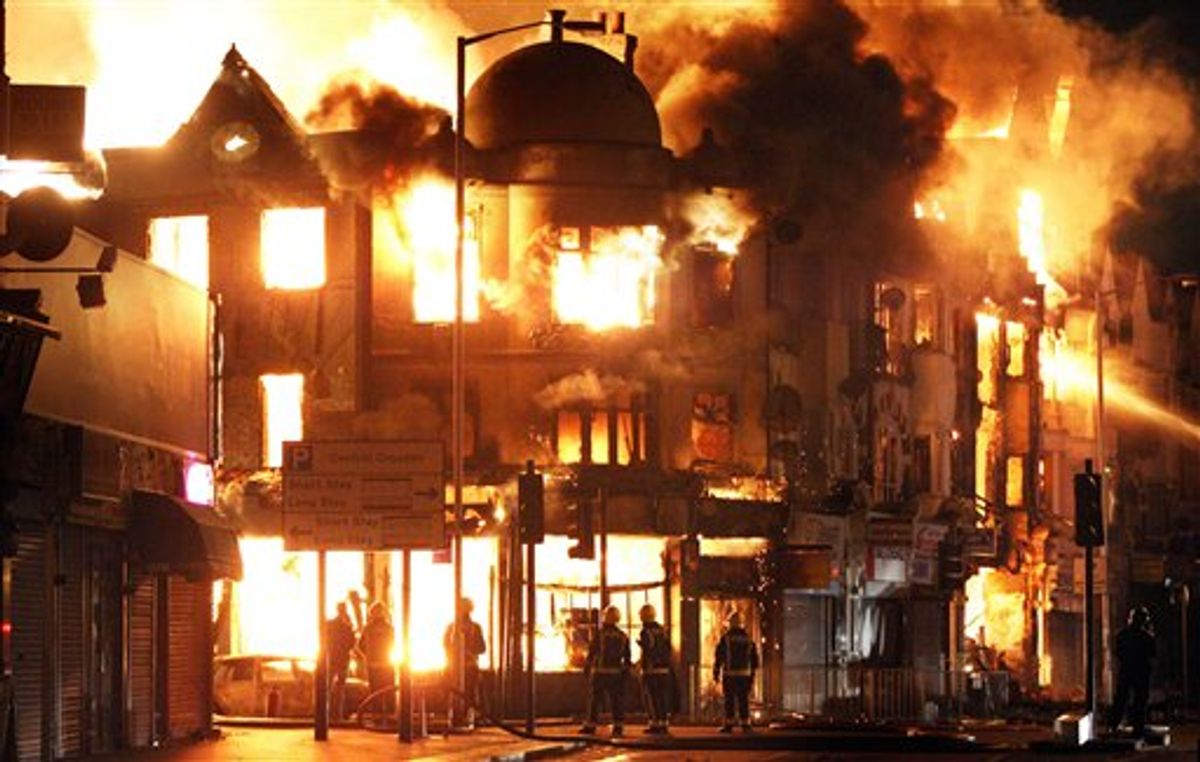 A property is on fire near Reeves Corner in Croydon, south London Tuesday, Aug. 9, 2011. A wave of violence and looting raged across London and spread to three other major British cities on Tuesday, as authorities struggled to contain the country's worst unrest since race riots set the capital ablaze in the 1980s. (AP Photo/PA, Lewis Whyld) UNITED KINGDOM OUT, NO SALES, NO ARCHIVE (AP)
--

London has been ablaze for the past three nights and has experienced what is clearly its worst civil unrest in decades. The rioting has now spread to other cities in England and no one really knows how much longer it will last. I spoke to some friends in London and they described an otherworldly atmosphere of panic and disorder: rumors are now swirling that the Police have been instructed to use rubber bullets to disperse the crowds, and riot control units from the length and breadth of the entire country are converging on London to bring the situation back into some sort of control.

Using a phenomenon as complex, unwieldy, and unpredictable as a riot to score political points is dangerous. As Paul Campos of the blog Lawyers Guns & Money said, "Urban riots are usually complex events, in which people participate for many reasons, ranging from simple boredom and criminal opportunism on one end, to conscious political protest on the other."

Judging from all available press reports, it seems that the rioters have no clear political grievances whatsoever besides, perhaps, a generalized hatred of the better off and "the system." Most of the violence, theft, and property destruction have been committed by people that seem to be taking advantage of the atmosphere of chaos to pocket clothing, electronics, and food that they might otherwise be unaffordable. In other words, while there are undoubtedly some "root causes" the violence in London, which has occurred overwhelmingly within immigrant communities themselves, seems to be almost entirely about opportunistic criminality and inchoate rage.

Notably absent from the London riots, and from any press reporting about them, is a religious angle. Almost all accounts, from left-wing and right-wing press outlets alike, agree that the disturbances are overwhelmingly about class tensions, and are not about race or religion -- one can peruse images of the rioters and quite easily see that the youth are a mixed collection of (to use British parlance) Asians, Afro-Caribbeans, and whites.

To say that the conservative press has been reticent to comment about the London rioting would be a pretty serious understatement. Ground zero for movement conservatives, National Review Online’s The Corner didn’t have its first post up about the London riots until almost 8 PM on August 8th, and that was a simple cut-and-paste from the Daily Telegraph. As of the writing of this article, roughly 9am on Tuesday August 9th, The Corner had one additional post by the same author that was also largely a cutting-and-pasting of another article from the Daily Telegraph. Noted civilization warriors such as Victor Davis Hanson, Mark Steyn, Theodore Dalrymple, and Daniel Pipes, who have in the past shouted themselves horse about the lethal danger that multiculturalism poses to "The West," haven’t said anything at all.

National Review writers, however, did manage to find the time to write posts about: the debt ceiling crisis, the administration’s treatment of S&P, the Iowa primary, Rick Perry, Margaret Thatcher, union busting in Wisconsin, the Tea Party (or to be more particular, the media’s horribly unfair treatment of it), the Eurozone, and the issue of "liberal media bias."

The Weekly Standard’s blog was little different -- the first post mentioning the London riots appeared at 7PM on August 8th and was simply the pasting of a link to an article in the Murdoch-owned tabloid The Sun. Weekly Standard writers did have enough time to cover Tibet’s new leader, union busting in Wisconsin, several aspects of Barack Obama’s wretchedness, Afghanistan, and the "national popular vote" effort to reform the electoral college.

Over at Commentary, meanwhile, there hasn’t been anything about the riots in London but, over the past three days, there have been articles about Mitt Romney, the US-Israel alliance, Rick Perry, Michele Bachmann, allegations of Newsweek’s sexism, and several articles on the comprehensive wretchedness of Barack Obama.

Now it is always difficult, of course, to complain about something that hasn’t actually been written -- if you made a point of criticizing someone only for things that they hadn’t done, you would (justifiably) be considered crazy.

However, I very clearly remember the far more energetic, effusive, and borderline hysterical manner in which the conservative press reacted to a series of riots in Paris back in the fall of 2005. I remember because, back then, I myself was something of a lunatic neoconservative and even joined in with a thoroughly wretched contribution to the "Muslims are scary and evil!" chorus.

Rather than shout myself hoarse describing the hypocrisy and double standards of people who bravely label themselves defenders or moral absolutism, and who never tire of accusing liberals of "relativism," I’m simply going to paste some choice quotes that conservatives used to describe the Paris riots which were, in scale and intensity, broadly similar to those which are now taking place in London. You can decide for yourselves whether their rhetoric and outrage about rioting Muslim youth in Paris matches their near-total silence about rioting multi-ethnic and multi-religious youth in London:

How can rioting by disaffected youth in one Western European capital city be evidence of a titanic civilizational struggle and of a all-out "civil war" while rioting by disaffected youth in another Western European capital city is evidence of nothing in particular? Surely it doesn’t reflect an undue focus on Islam as a religion, right?

After I finished writing this post, I went back to check NRO, and two of their writers had finally responded to the London rioting by doing more than cutting and pasting a newspaper article.

I’ll let you decide whether these rather tepid efforts, which seem to reflect a generalized dislike of the underclass as opposed to fear that "THE MUSLIMS ARE TAKING OVER THE WORLD," are in keeping with previous conservative hysteria on the topic of youth rioters.

While Glenn Greenwald is away this week, Mark Adomanis, who maintains The Russia Hand at Forbes, is filing periodic pieces