The Irish singer blows the Internet's mind by getting older 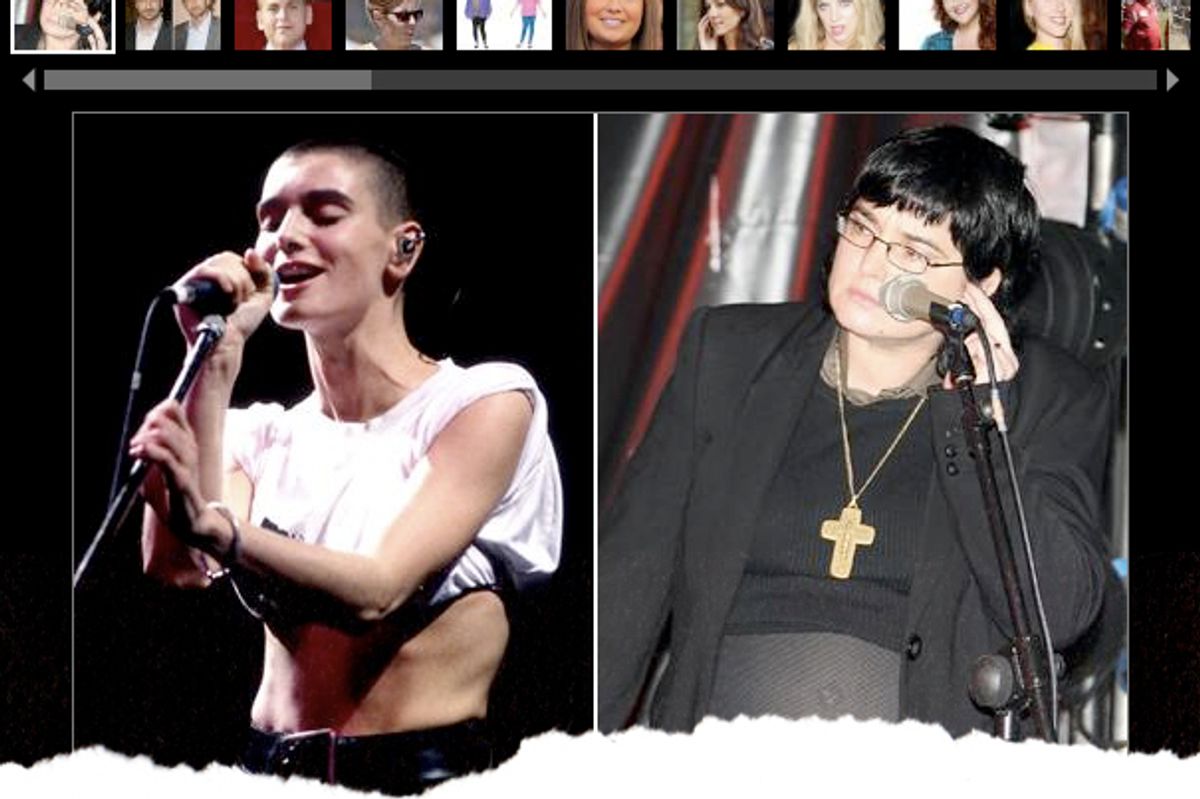 Sinéad O'Connor is accustomed to shocking people. The Irish singer has been a natural-born attention getter since she first gained fame over 20 years ago, when she was as recognizable for her shorn head and fiercely outspoken opinions as she was for her haunting voice and arresting beauty. So when she turned up to perform at Ireland's Bray Music Festival over the weekend, it was inevitable that she'd create an uproar. The latest wild stunt from the woman who once defiantly ripped up a picture of the pope on "Saturday Night Live"? Getting older and gaining weight. The horror!

Sporting a short dark bob, eyeglasses, a belly-revealing mesh top and a more ample figure than fans remember from her "Nothing Compares 2 U" heyday, the 44-year-old dared to appear, as Inquisitr helpfully noted,"No Longer Bald or Skinny." ABC News asked, "Sinéad O'Connor, Is That You?" and ran the inevitable slide show of celebrity weight-loss ups and downs, while E! crowed that O'Connor went "from looking like Natalie Portman in 'V for Vendetta' to your dorky self in high school" and did its own slide show of "shocking transformations."

It's not entirely surprising that the image of a bald, white-clad waif would be so indelible in the public mind. O'Connor has lived largely out of the spotlight for several years now, and has not released any new music since 2005. Even her own website is conspicuously riddled with photos of her more familiar doe-eyed and pixie-ish image. Yet the Internet outpouring of astonishment mixed with glee over her changed appearance has been the truly unpleasant sight in all of this. On People.com alone, there are hundreds of comments -- many on the theme of what a "shameless blimpo" "pig" she's become, and many others flat out refusing to believe that the photographs are truly of O'Connor.

Anyone who is old enough to have had a moment of disbelief regarding the Facebook friend request of a long-lost pal knows that time does not march equally over everyone. The changes we barely notice on the people we're around all the time don't register as dramatically as those on the faces and bodies of those we don't see regularly. The urge to contrast then and now, to check off either the "still got it" or "let themselves go" boxes in our minds is powerful. It's the subtext that drives high school reunions and the Googling of ex-lovers, the reason former Clash guitarist Mick Jones once musically bragged that among his accomplishments, "Somehow I stayed thin while the other guys got fat." And for the legions of detractors O'Connor has amassed over her outspoken career, perhaps there's a strange satisfaction in seeing evidence that she's no longer the head-turner who could rock a chrome-dome and still be gorgeous. Bet you're not so high and mighty now, missy!

Yet as Carrie Fisher recently remarked of her long-ago golden bikini heyday, "I swear when I was shooting those films I never realized I was signing an invisible contract to stay looking the exact same way for the rest of my existence." So Sinéad is likewise no longer the woman she was in 1990. And yes, big shoulder pads and see-through tops are a sartorial misstep on almost everyone. But is any of that really a cause for such a conspicuous outpouring of schadenfreude? O'Connor is now a mother of four who has been open about her struggles with bipolar disorder. In 2007, she told Oprah Winfrey, "I actually kind of died and got born again as a result of taking the meds." And as some of O'Connor's more charitable online defenders have noted, many of the medications used to treat bipolarism also cause weight gain.

"Shocking" though O'Connor may continue to be to others, the singer, who claims she "really enjoyed" her recent Bray set, seems to have in recent years become far less scandalous to herself. In 2008, she genially told an Australian newspaper, "I am not a pop star as I was ... so I am not having to deal with that kind of attention. Then I was young and now I am old and ugly and a bit fat ... I'm entitled to have a belly." She's also entitled to change her hairstyle, haters.

As it happens, this morning on the way to a doctor's appointment, I passed by a neighbor I hadn't seen in a while. I almost didn't recognize her, because she too has transformed of late. She was thinner and paler, and on her head she wore the telltale headscarf of a woman going through chemo. So in case anybody out there needs a reminder, here it is: To be able to grow older is a gift. To be on medication that can save your life is a blessing. A little thickening around the middle seems like a small price to pay. Though much has changed in the more than two decades since Sinéad O'Connor was that volatile, beautiful rock star, many things have improved with time. The once-suicidal girl now admits that "It doesn't matter if things aren't perfect." And tempered by life and experience, that clear, achingly lovely voice has only become more poignantly astonishing.