Why are Treasury prices rising after the S&P downgrade? 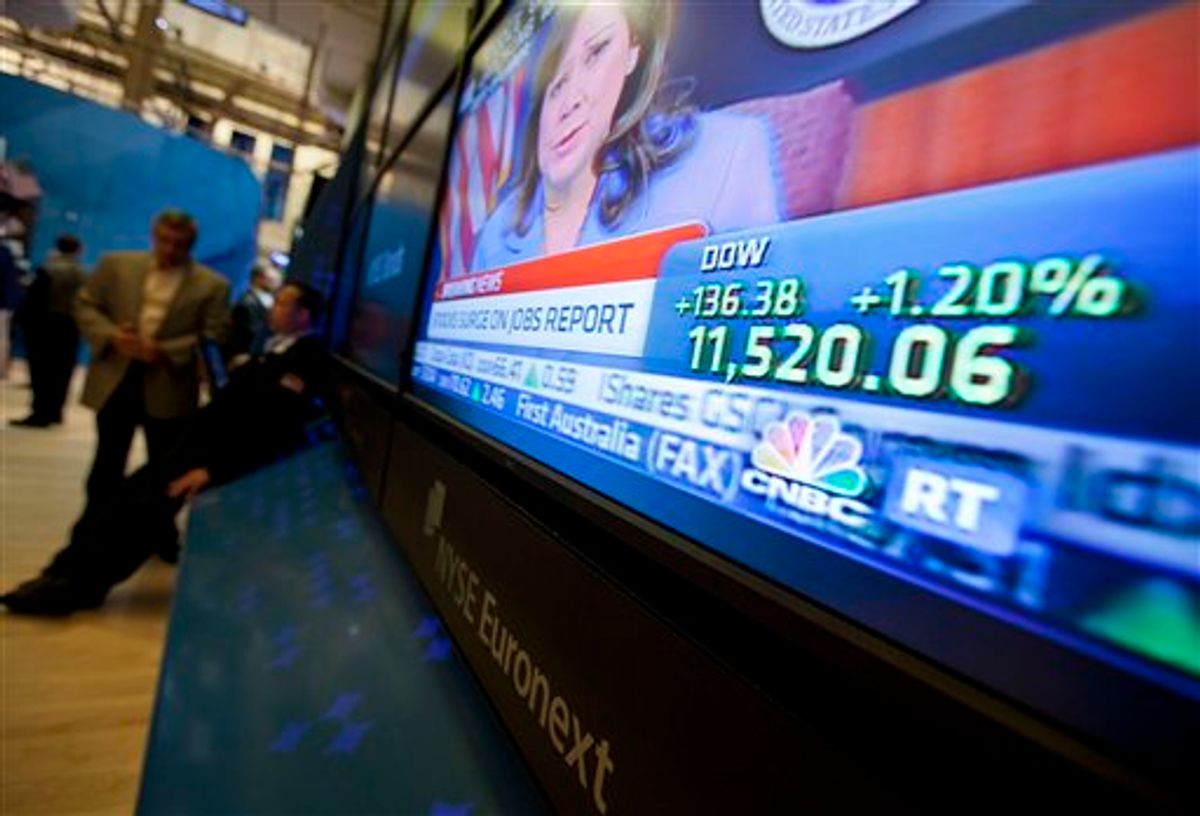 A monitor displays the Dow Jones Industrial Average on the floor of the New York Stock Exchange on Friday, Aug. 5, 2011 in New York. A government report that hiring improved in July sent stocks sharply higher just after the market opened. The rally lasted less than a half-hour. Many economists still fear that the economy might dip back into recession. (AP Photo/Jin Lee) (AP)
--

Despite the hysteria that the downgrade of US debt would lead to US funding costs rising and Treasuries crashing, instead we've had stocks crashing and Treasury prices rising sharply. That's completely rational. The policies being implemented as a result of this contrived budget crisis are deflationary. For non-economists, as much as inflation has been touted as a major financial problem over the last 30 years, deflation is widely acknowledged to be Economic Enemy Number One. And high quality bonds like Treasuries are the place to be in deflation.

Deflation occurs when you have a falling level of prices and wages. Even though it isn't included in the Consumer Price index, the most important price in an economy is that of labor. We've had stagnant real worker wages over the last 30+ years, and from 2007 to 2009, IRS data shows that incomes fell 15% in real terms. Most of that is due to unemployment, but remember another pattern of the last decade: when seasoned workers lose jobs, when they find work again, it is often at much lower pay. Stagnant real wages are pretty much stagnant actual wages in a low inflation economy.

As many economists have recognized far too late is that increasing consumer debt levels is what enabled the US to fuel economic growth even with no real wage increases. Rising consumer debt is not a plus over the longer term, since consumers don't make productive investments from debt (the one supposed exception, that of borrowing to fund education, is misleading, since the rising borrowing has led to increased costs of education as well as more people getting graduate degrees that have more to do with credentialing than actual value to economic productivity, such as MBAs).

Since wages in aggregate are not growing, consumers are now trying to or being forced to delever, and the other ways to keep growth going (business investment and government spending) are very much absent or in retreat, the slack in demand can lead to stagnant or falling prices (that doesn't mean particular prices, like milk, won't rise, but the general price level will be flat or lower). That took place in the Great Depression and in a less extreme form, in Japan in its bubble aftermath. Deflation turns an economic downturn into a self-reinforcing spiral. Outstanding debt, which is usually too large to begin with, becomes crushing. The interest payments were set assuming positive inflation, so that the future interest payments and the principal would be paid back in cheaper dollars.

But in deflation, the reverse happens. With prices falling, cash is worth more in the future. That discourages consumers from spending, and means that paying off existing debt becomes harder and harder as incomes fall. The fall in spending as consumers and businesses delay purchases slows economic growth further, which makes the price fall accelerate, which increases the real cost of the debt burden.

Every country that has tried reining in government spending to deal with a debt overhang has only made matters worse. In Ireland, the GDP has contracted nearly 20% in nominal terms, making the debt to GDP ratio considerably worse. Latvia has had similar outcomes, and austerity is also leading to falling GDP in Greece, again making the country more, not less, insolvent.

Japan, which had a more massive bubble relative to the size of its economy in the late 1980s than the US did two decades later, had aggressive government spending through 1997, and barely kept the economy out of deflation. As soon as it tried balancing its budget, on the assumption the economy was now stable, growth promptly went into reverse and Yamaichi, one of the four biggest Japanese brokerage firms, failed.

The better approach with a debt hangover is to write down and restructure the debt that can't or probably won't be repaid. Those very same 1997 financial failures forced the Ministry of Finance to accept a more Darwinian model and allow more bank failures and restructurings. A 2009 recent Economist article stated that it has taken the banks 17 years to work off their bad debts. Not surprisingly, the Japanese told the US in uncharacteristically blunt terms twhen our crisis started, that the number one priority was cleaning up the financial system. Instead, we've copied Japan's mistakes.

But, but, but....you may protest...doesn't the US government have way too much debt? In short, no. Even the work of Carmen Reinhart and Kenneth Rogoff, which is highly problematic in that it mixed gold standard countries with so-called "fiat" issuers like the US, found that government debt to GDP didn't hurt growth until it exceeded 90%. CBO projections show US debt to GDP before the debt reduction measures were put into motion stabilizing at around 77% as of 2015. (The Reinhart/Rogoff work is also at best a correlation. As occurred in this crisis, government debt to GDP levels rise sharply in the wake of financial crises. Financial crises also feature deep recessions in their aftermath. Thus in many cases, the low growth and high debt to GDP levels were caused by a criss rather than the debt levels causing the low growth).

A fiat issuer like the US can only default by choice. It can never run out of dollars to satisfy creditors (that is hot the case with US states or countries like Greece, which must borrow if they run budget deficits. The US does not need to sell bonds to finance its deficit, but we have kept debt issuance in place as a holdover from the gold standard era).

Some have tried arguing that S&Ps rating change was warranted due to inflation risk, but that's bunk too. The US experienced actual high inflation in the 1970s, and the dollar weakened then, yet the US was not downgraded by any of the ratings agencies.

The S&P downgrade looks to be politically motivated. The President had several routes by which he could have circumvented the debt ceiling restriction and almost certainly would have used one of them if the debt celling talks had dragged on so long that it became difficult to make interest payments out of tax receipts. McGraw Hill, which owns S&P, is headed by Terry McGraw, a prominent figure in the Business Roundtable, which has stated that it wants Social Security privatized. S&P has used its muscle to its advantage in the past, such as a state effort in Georgia in the early 2000s which would have reined in predatory lending and in turn reduced the issuance of private label mortgage backed securities. Rating them was a very profitable business for all the rating agencies. S&P torpedoed that initiative by refusing to rate bonds with Georgia loans in them. That forced Georgia to back down and killed other state efforts underway. Had these laws been in place, it is almost certain the subprime crisis would not have risen to a global-economy-wrecking event.

Austerian policies are sound medicine only when economies are strong. That isn't where we are now. Inducing an economic downturns when an economy is choked with private sector debt is very likely to produce near or actual deflation. Stocks perform badly. They are subject to low general prices with sharp rallies and declines, which favor brave and adept traders, but not ordinary investors. Riskier bonds shunned because they may be restructured or default. As much as S&P tried to diss Treasuries, it is has created conditions that make them a choice investment.