The last days (and nights) of Alexander McQueen at the Met

Slide show: Crowds stand in the pouring rain for their final chance to see the fashion icon's museum exhibit 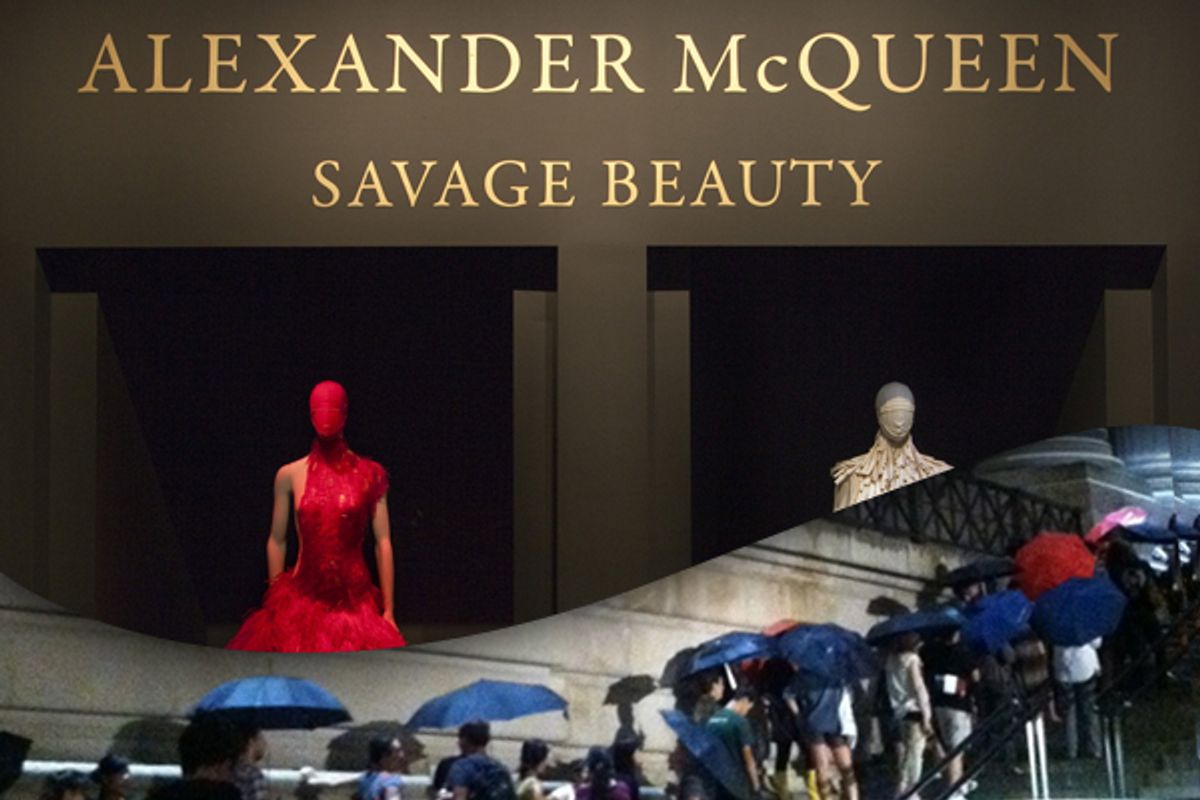 If you haven't seen the "Alexander McQueen: Savage Beauty" exhibit at the Metropolitan Museum of Art by now, tough cookies. It's over. Though the doors stayed open past midnight for the exhibit on Saturday and Sunday night, the 3 month showcase of the iconic fashion-meets-art-meets-BDSM designer has officially ended its run at the Met. So why didn't you see it?

Of course, you very well might have: before the final weekend, the museum estimated 650,000 visitors had come to pay homage to the brilliant British designer who committed suicide last year. On Saturday alone, another 15,000 came and waited upwards of five hours in the rain to get a final glimpse of the costumes that ranged from Lady Gaga-esque to straight-up David Cronenbergian. "Savage Beauty" will go down as one the museum's 10 most popular exhibits of all time.

So my only question, as I dodged the pouring rain on Saturday to talk to the soaked patrons of the museum was why did they wait until the very last second to visit this must-see piece of postmodern history?

But in finding out the answers ("We were too busy," "It slipped our minds," "We were going to, but…"), another interesting dynamic emerged. Nearly all the people I talked to knew nothing about McQueen's work. Oh, they might have Googled his name, or known that his label designed Kate Middleton's wedding dress, but most of them wouldn't have been able to pick out his style in a lineup.

No, what drew people to wait hours to see the show – and let's be honest, when was the last time you waited hours for anything on a Saturday afternoon, let alone a museum wing that was available at any time during the past three months – was what they had heard about the spectacle from their friends. It might have been the greatest unplanned marketing campaign in the museum's history: like the characters in Vladimir Sorokin's "The Queue," people stood in line because other people before them had stood in line, and because this was their last chance to stand in line for this particular thing, which they didn't really know all that much about, except that it was supposed to be really cool.

Which is not to say that curated McQueen show didn't live up to its hype. Only that it was never more apparent than that rainy Saturday that New Yorkers are less slaves of fashion than they are slaves of buzz.

Juxtaposing images of "Savage Beauty" with the tremendous crowds for its final hours, this slide show represents the responses of nearly every person I talked to Saturday evening. If their answers sound suspiciously alike, it's not for a want of diversity in the demographic. It's because deep down, everyone wants to see what's inside the big tent…and because their friends had told them too. Maybe they had ought to rename this show "Alexander McQueen: Social Media Peer Pressure"?

But just for the record, no one I spoke to left disappointed; this was no P.T. Barnum circus act to bring out the chumps. Even if the viral factor of McQueen's work did bring out the masses, at least we all left having seen something new, exquisitely detailed, and more than a little bit terrifying.

Plus, now we can tell all our other friends how great it was.