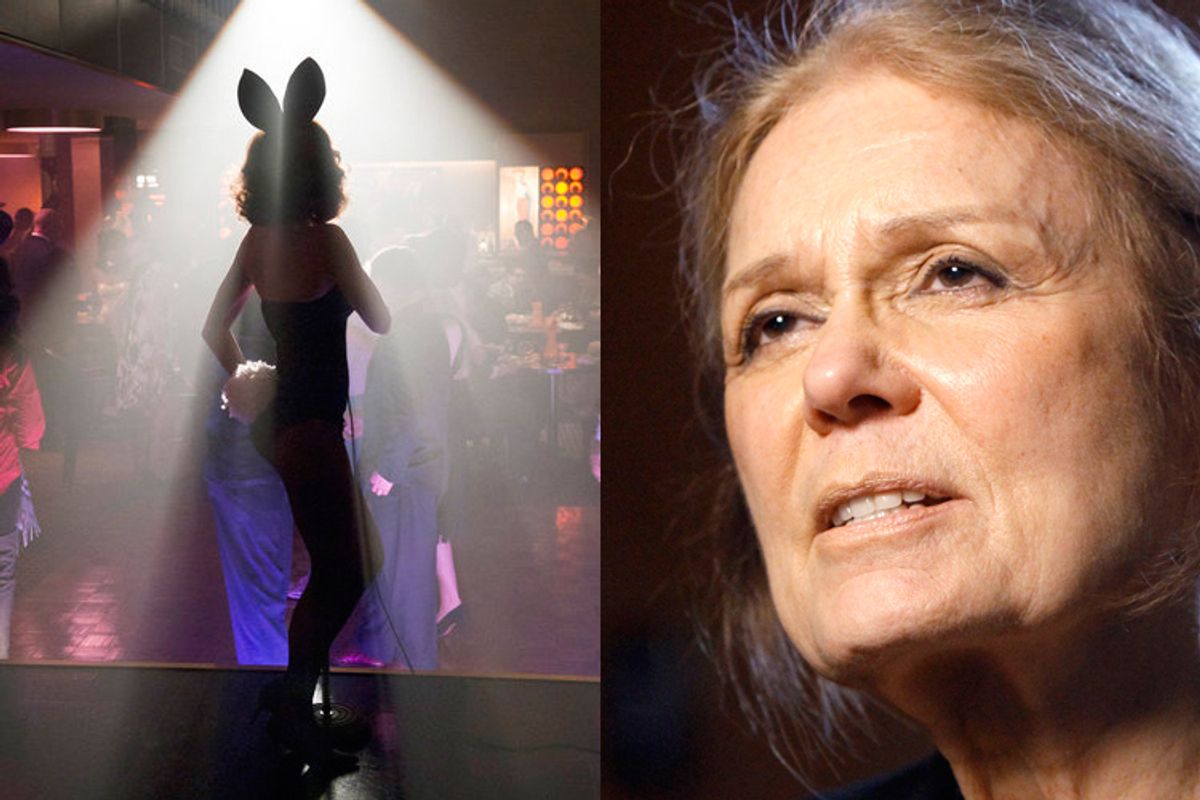 Gloria Steinem just did NBC 's new '60s-era series "The Playboy Club" a huge favor. She said you shouldn't see it. And you can't buy publicity like that! In a new interview with Reuters, the 77-year-old feminist icon said flatly, "I hope people boycott it. It's just not telling the truth about the era."

Steinem has special insight into the accuracy of that long-ago world -- she went undercover as a bunny at the New York Playboy Club nearly 50 years ago for a groundbreaking exposé. And the new show, she says, "normalizes a passive dominant idea of gender. So it normalizes prostitution and male dominance ... I just know that over the years, women have called me and told me horror stories of what they experienced at the Playboy Club and at the Playboy Mansion." And Steinem's disgust is just the latest bit of delicious, attention-getting controversy for the show -- NBC's Salt Lake City affiliate has threatened not to air the series deep in the heart of Jesus country. There's just something about girls with big cotton balls on their butts that makes people go berserkers.

It's fair to guess that Steinem, who this week also called Newsweek's unflattering Michele Bachmann cover "borderline" sexist, may be on to something here. Last week, NBC entertainment chairman Robert Greenblatt described the show as a "really fun soap opera," and the network is currently inviting viewers to "Step inside the seductive world of the Bunny, the epitome of beauty and service, and rub shoulders with the decade's biggest mobsters, politicos and entertainers." Just let the phrase "epitome of beauty and service" roll around in your head a minute, and try to keep your lunch down.

Wistful romanticism for the past -- or, more accurately, a neat TV show version of it -- will always appeal. Note, for example, the way a certain segment of the population fondly cites the "Mad Men" era for its style and romanticism. Oh, why can't it all be like back in Don Draper's day? Sure, the dresses were great, but that whole pre-civil-rights era, pre-feminism, pre-Stonewall thing was considerably less of a good time for a lot of people. Likewise, "I can't imagine the show will be anything like the real Playboy clubs," Steinem told the L.A. Times Wednesday. "Hefner is always trying to make himself and the clubs seem glamorous instead of tacky."

But what no one seems to have asked Steinem is whether or not she's seen even a minute of the show. She can "imagine" all she wants, but wouldn't her argument have greater weight if she could say with authority, "That Eddie Cibrian has no idea"? And while Steinem's account of the horror stories she's heard from former bunnies is probably true, it's also likely that women who had a positive experience in the Playboy machine wouldn't feel a deep need to reach out to Gloria Steinem and tell her about it.

It's obvious from NBC's promo that "Playboy Club" promises a heaping portion of T, with a heavy side order of A. But it also features an attempted sexual assault, and an African-American character determined to break the magazine's color barrier. It's not easy, sexy fun at this club. But will it be a historically accurate portrait of a particular time and place in American history? I don't know, was "Happy Days"?

"The Playboy Club," which debuts in September, may well be atrocious. It may be sexist tripe. But we'll never know unless we see it with our own eyes. And that's got to be exactly what NBC is counting on.