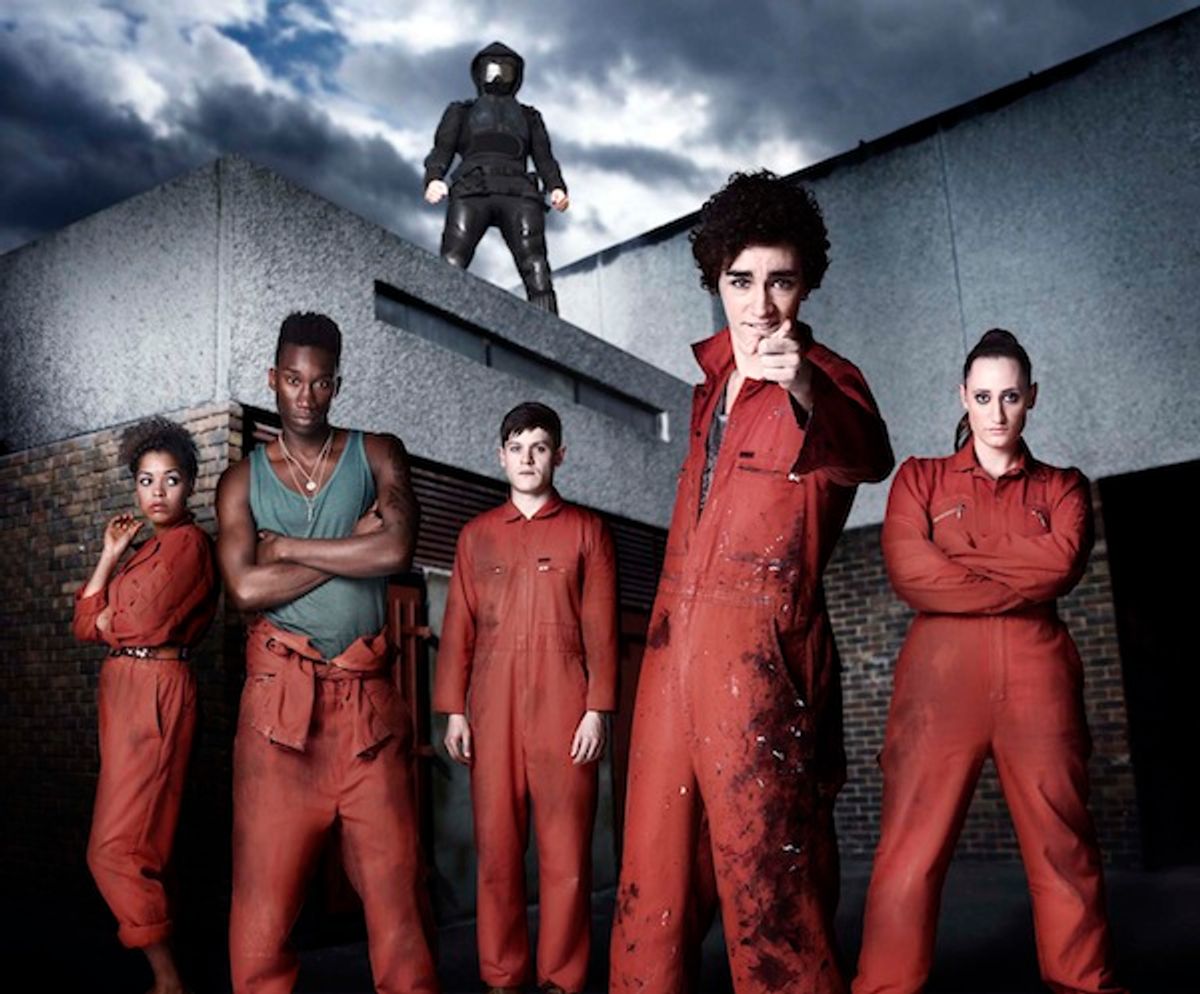 They're not out to save the world... just themselves. (Contract Number (programme))
--

Who among us has never wished for superpowers: the ability to read minds, turn invisible, make yourself irresistible to the opposite sex, or fly? That fantasy plays into a very human desire to stand out and be better than the common man. It's not exactly a new concept, either; one only needs to look at America's history of comic books (or, more recently, comic book movies) to see that given the choice, most of us would take great powers and deal with the great responsibility later.

Not so for "Misfits," a British comedy-drama about to begin its 3rd season on the E4 network. The five teen protagonists are neither heroes nor antiheroes: They are "troubled youths" hit by lightning while performing community service. And they spend most of their time hiding their newfound abilities, wishing they'd just go away. They're mistrusted by the authorities and have less desire to save the world than to save their own crumbling relationships. "Misfits" feels less like a superhero show than an episode of the original "Skins" -- if Tony were immortal and talked to the dead and Sid could turn back time whenever he screwed up.

With both seasons of "Misfits" now available on Hulu, there's never been a better time to catch up on these anti-"Heroes" as they stumble through life and love, burdened by powers they never asked for and would do almost anything to rid themselves of.

I spoke to series creator Howard Overman about British teenagers, emotional alienation and the country's inferiority complex about American superheroes.

"Misfits" has really gotten some viral attention over in the States. I heard about it from a post on Videogum, and now it's all over Hulu. But the idea of "Kids find superpowers, don't really want them," is as old as Peter Parker. At first, I thought the show was going to be like a British version of "Heroes." So what makes "Misfits" different?

I wanted to do a British take on the superhero genre. You remember that film "Shaun of the Dead"?

Yes, Simon Pegg, zombies, all that.

Well, you know how that's the British take on the zombie genre? I saw that there was room for that kind of perspective on superheroes. Of how a bunch of British teenagers would react if they got powers. In America, when a person gets special powers they go off and save the world. I wanted to do it on a smaller scale: These teens became powerful, but then they just carried on trying to be normal, hanging out with their mates and such. It was just a massive inconvenience for them to have these gifts. All they want to do is keep it secret, and live day to day.

People really took to the idea of it being this much more personal, emotional story vis-à-vis to what generally happens in these narratives, which is that some threat comes along and these people have to save the world. I had this idea that our story should be able to work even without the powers. The powers were extra; the story of what it's like to be a teenager in Britain was fundamental. This isn't a show about superheroes.

Because they aren't heroes? I think that's interesting in regard to British culture, especially comic book culture. Grant Morrison, who is doing the new "Superman" series, talks a lot about how growing up there were never any cool British superheroes. They were mostly knockoffs of DC Comics characters, and were kind of lame. They were pale imitations of what he saw as the American Superman; these flashy über-menschs. There was almost like an Anglo-anxiety over not having these great saviors.

I think that's definitely true. In the very first episode, after the kids get their powers, they are standing on the roof and one of the characters says, "This kind of thing only happens in America." It almost doesn't feel right to have superheroes in Britain. Just like you can't do a car chase movie in Britain, because the traffic is too bad ... you could only go 30 miles per hour. So "Misfits" plays off the idea of relocating a superhero to somewhere we haven't seen them before.

What really drew me in when I was reading about it was that nobody would say what Nathan's power was. And he starts out as our protagonist; he's our entrance into this world, and yet all he wants is to be left alone. He's hyper-cynical about life in general. And without giving too much away, when we find out what his powers are, you realize that these gifts are really tied into the phobias or feelings of each of the teens.

It always seemed like superheroes were given very arbitrary powers. One could fly, one could shoot electric bolts; it had nothing to do with who they were as people. We wanted to do something where the powers are very much tied to the characters, to their history and their feelings. So whatever was the prevailing emotion when they gained their abilities, that was reflected in the powers. I think that gave a depth to the characters. And we're always trying to play with the idea that the powers were just as much a curse as a blessing. It wasn't a simple question: Is this a good thing that Simon can now literally do what he's felt all his life? So these are powers that are based on each person's experiences; they weren't arbitrarily given.

Do you get a lot of comparisons to the other British crossover hit about teens, "Skins"? They are very different, obviously, but they both deal with what it's like to be young and screwed-up in Britain.

I think both shows are heightened, more dramatic versions of what is going on with modern British teens. My idea was: If it feels real emotionally, the fact that there are these crazy, otherworldly happenings would resonate with audiences. I never sat down to make some social commentary about teenagers in Britain today, though a lot of people seem to think that's what I'm doing. Which is often the case with good dramas ... people can read into them and find meaning that relates to what they see happening around them, or in their heads.

The idea was to take a bunch of kids who were already mistrusted -- they were already convicted of a crime, and so people were automatically suspicious of them -- and kind of leave it ambiguous to what side of the law they were on. They really can't shove their powers down people's throats, because the police would lock them up. So it speaks to that natural teenage experience of being alienated, which makes them perfect British superheroes.

Interesting. So if we were watching this show from the point of view of the police, or maybe just a guy on the street, "Misfits" could just as easily be supervillains?

There have been criticisms in the papers about how often the characters kill information workers. But they aren't malicious, and they haven't hurt anyone that didn't pose a threat. They aren't evil. The idea being that these kids started out as caught by the law, they were already seen as "bad" by authority figures. But their crimes are petty stuff, they were just unlucky, and out of the millions of kids who do drugs or steal, these characters just happen to start out with criminal records. They needed to be sympathetic characters, though, for people to want to root for them.

A lot of superheroes are misunderstood, even in American legends, but they're always trying to -- like you said -- save the world. And here you have kids that aren't trusting, or necessarily trustworthy. I'm just wondering, if this show were American, would these kids automatically be seen as the bad guys? There are a lot of sympathetic bad guys in superhero stories, right? But these are characters that don't even want to play the good guy/bad guy game.There is no personal gain for them, nor a strong desire to help anyone.

Yes, it was always supposed to be a sort of gray area, what they were choosing to use their powers for. They aren't good guys or bad guys. They are teenagers.