The fantasy author claims mailmen stole "Game of Thrones" episodes. But to what end? 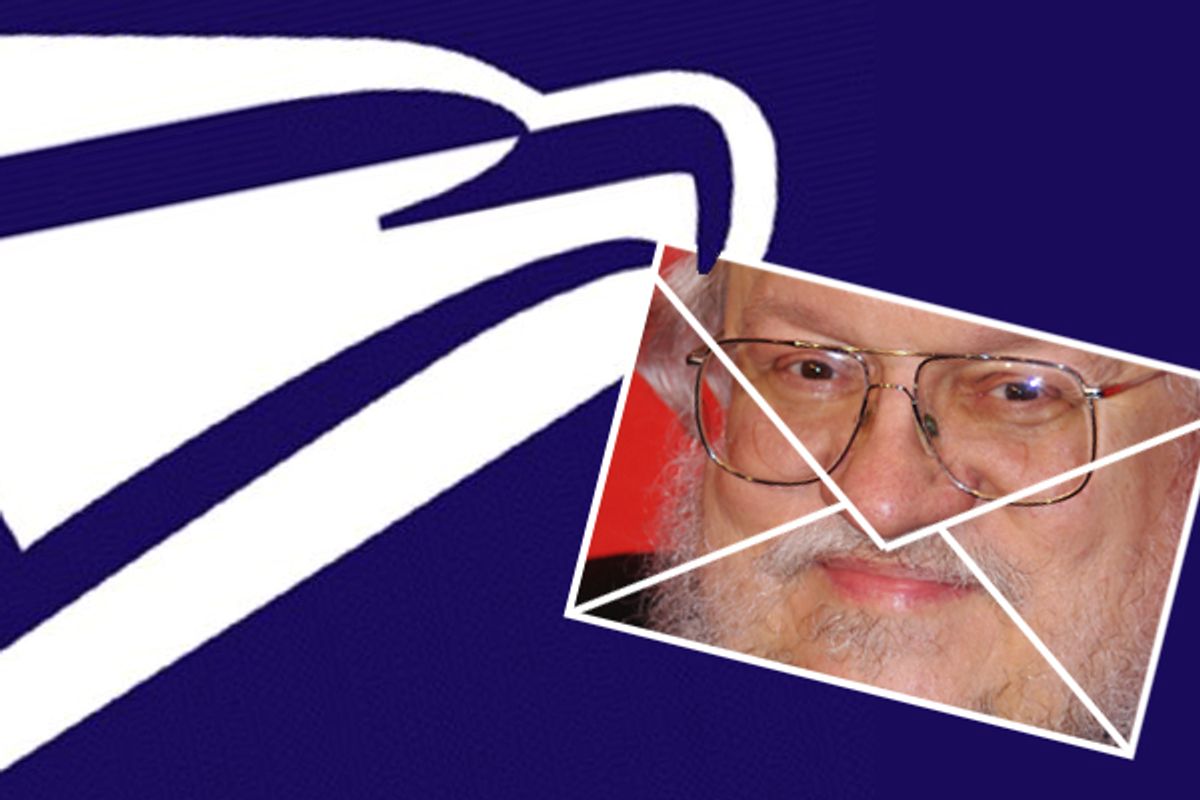 This is why I send everything by raven.
--

Conspiracies wrapped in conspiracies: No matter how hard "A Song of Ice and Fire" writer George R.R. Martin tries to ingratiate himself back into the hearts of his fickle fans since his delayed "Dance of Dragons" made his loyal followers into turncoats, he seems to be thwarted at every turn. His publishers had to warn readers away from Internet forums about the books, in case some spoilers of "Dragons" had leaked before the book's official release date. Trying to respond directly to his critics during a Google interview resulted in more resentment. And now Martin has to contend with the malicious force of the U.S. Postal Service, whose employees he claims stole scripts from the first season that were supposed to go to charity.

"We had hoped to bring a couple of signed scripts from the first season of the HBO series GAME OF THRONES with us, and the good folks in Belfast were kind enough to donate them. Dan Weiss sent them across the pond (registered and priority, signature required). All that arrived was a battered envelope and Dan's cover letter. The US post office delivered the envelope in a plastic baggie with a pre-printed note apologizing for the "damage." But this was no error in handling. The envelope was torn open at one end, and both scripts were gone, though Dan's letter remained. I am convinced the scripts were stolen."

Now Martin has sent his ravens all across the Internet to alert his followers to be on the lookout for these valuables, which include the final shooting scripts of two episodes of "Game of Thrones" from Season 1, autographed by two of the show's writers.

"Whoever sold these scripts will presumably try to cash in at some point. So if any of you ever see scripts fitting this description turn up on ebay, one of its competitors, or on some dealer's table -- notify me at once, and report the stolen property to whatever local authorities are appropriate."

There are so many questions here: Why would these shooting scripts be worth that much money, if they had yet to see Martin's signature? The episodes being donated -- "Baelor" and "Fire and Blood" -- have already aired, and teleplays of TV shows are not that hard to come by. (In fact, one reader on BoingBoing already claims to have found one of the scripts on eBay, though it's the wrong episode.) Secondly, if these manuscripts were so valuable, why didn't Martin's associates think of a better way to send them than by regular mail, especially since it had to travel internationally? Why not FedEx?

And why should the blame be limited to the U.S. Postal Service? Martin says in his post that "We believe the package made it across from Belfast relatively unscathed," but is there any proof of that? Did the scripts go through customs?

In all likelihood, the scripts were stolen, but Martin is making some pretty big leaps as to the culprits and their motive. As he said, no one would be able to put these scripts on eBay without being detected, and their relative worth without Martin's signature is pretty nominal, especially when compared to the risk of getting caught. (Tampering with mail is still a federal crime, yes?) At least there is solace in knowing that whoever the culprit is probably ended up disappointed with the contents of the package, which they must have assumed contained valuable Martin paraphernalia. Or perhaps it was taken by a super-fan, who believed he had found the last manuscript in Martin's six-series tome.

At any rate, this seems like a problem easily solved: HBO must have another shooting script from the series it can use to get the signatures again (maybe this time get a tracking number as well), and the charity in question can still benefit from a "Game of Thrones" auction. Or, as another BoingBoing commenter suggested, "The appropriate solution is to get Brienne of Tarth to wander around for hundreds and hundreds of pages looking for them."