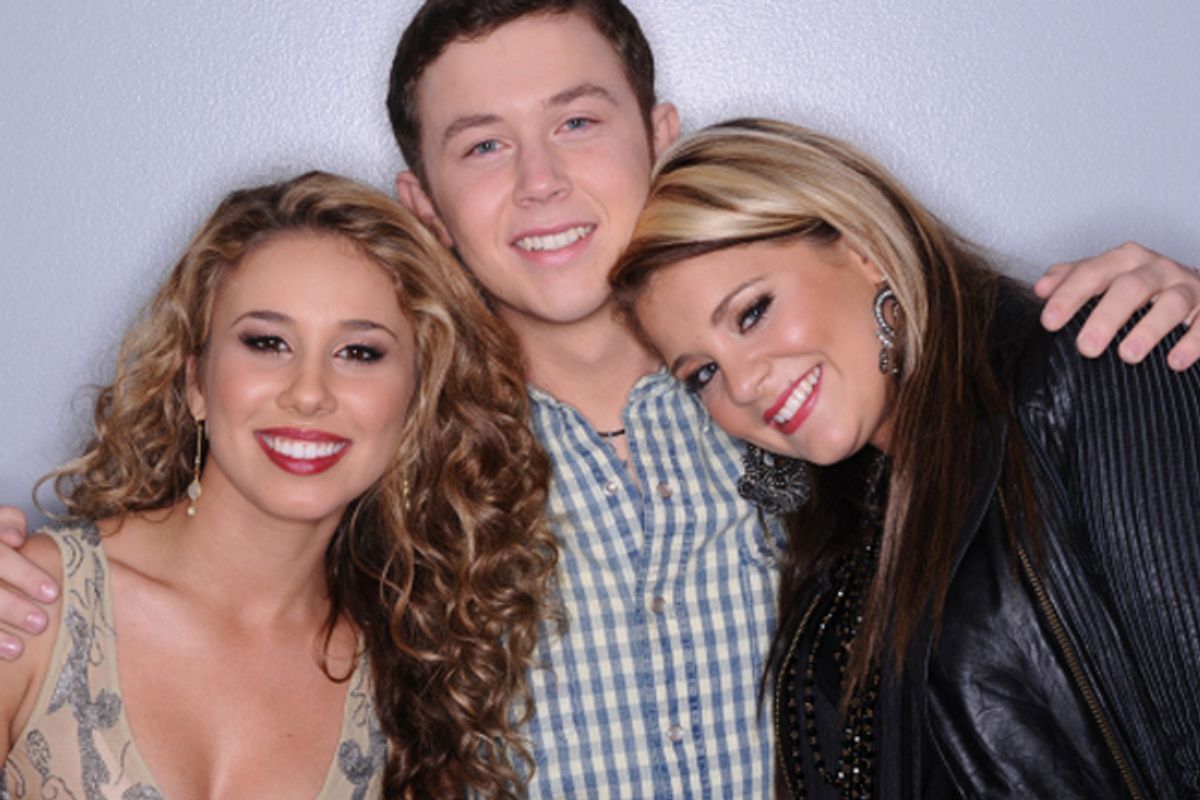 On a Wednesday evening last March, my daughters and I had an "American Idol" campout in our living room. I made hot dogs and microwaved s'mores as we watched the contestants croon through a crowd-pleasing roster of Motown hits. The next morning, my father-in-law died. That night, the girls and I gathered again in the living room, huddled on the couch in our pajamas, and watched Casey Abrams sing just a few bars of "I Don't Need No Doctor" to be granted reprieve from elimination.

For a decade now, "American Idol" has been winning fans with its weekly wallop of suspense and surprise, along with a fairy-tale conceit that fortune can smile on even the most obscure among us. It was a message that never really resonated for my family and me until this past season, when its variety show shtick turned out to be a surprisingly effective balm for our heartaches. The competitive song showdowns of James and Paul and Naima got us through a lot of rough, tearful nights, and so a pilgrimage to see our vocal heroes on their Idols Live tour seemed like an inevitable indulgence of grief therapy. And this week, after a new round of doctor visits, setbacks and concerns for loved ones, we had found ourselves clinging again to the prospect of awkward dance moves and Journey covers. Yet before last night, I'd never imagined how potent the show's magic could be.

My daughters and I had never been to Newark's Prudential Center, but as we stepped inside from a torrential summer downpour, we nonetheless instinctively beelined for our usual seats. Remember where Harry and his friends sat for the Quiddich World Cup in "Goblet of Fire"? That's always us. Forget the nosebleed section -- on my budget, it's strictly the altitude sickness section for my kids. My children are accustomed to open rehearsals, Shakespeare in the park and college football games that start at halftime, when they let you in free. So accustomed are they to tickets that read "partial view," they instinctively roost next to the back exits even at the movies.

Despite my daughters' -- and my own -- genuine excitement at being part of the enthusiastic crowd, of getting to hear Pia, Lauren, Jacob and the rest belt out a few favorites, my heart sank as I approached our seats, located in an altogether different ZIP code from the stage. I wished, just once, to be someplace other than the last row. "Idol" had been a bright respite in an unbearably bleak period of illness and loss. I couldn't resist a pang of envy for the families striding front and center, the ones swarming the concession stand for $30 souvenir books. "This is awesome," I told the girls as we headed to the ladies' room before the lights went down, "but sometimes I wish I could give you more." Then a funny thing happened.

No sooner had the words left my lips when a man with an "Idol" staff badge casually nodded to us and asked, "You excited for the show?" And when my girls and I whooped in the affirmative, he asked, "Would you like to meet the Idols?"

As a skeptical New Yorker, I gave the only logical reply. "Look, dude," I said, "I don't have any money."

"I'm not asking for money," he said, handing us badges. "Come downstairs after the show for the meet and greet." He was already walking away by the time we could sputter amazed thanks.

And so, after the show, a group of us -- some clearly with connections and some just randomly selected goobers like us -- found ourselves ushered through the bowels of the Prudential Center. We wended our way through a long tunnel until suddenly, there at our feet, was Lauren Alaina, plopped down on the floor signing autographs for a group of rapt fans. There was Casey Abrams, giving an ecstatic bear hug to fellow former contestant Brett Loewenstern. There were Pia Toscano and Haley Reinhart, hands on hips and posing for photographs. It was like opening a door to Wonderland. For a brief, happy time, the girls snapped pictures and gave eager, giddy hugs to the young men and women they'd passionately championed week after week all season long. (James Durbin, perhaps due to the Asperger's and Tourette's that can make socializing in crowds a challenge, wasn't present.) My younger child, her loyalty to Lauren still fierce, refused to even approach this year's champion, Scotty McCreery, preferring instead to engage in a serious bout of high-fiving with Jacob Lusk. Eventually the crowd thinned, and two train rides and much, much later, the kids made it to their beds, exhausted and exhilarated and still insistently wearing their badge-festooned T-shirts.

A few minutes with the stars of a TV-show-based musical revue won't cure cancer, and they sure as hell aren't a substitute for a lost family member. But that time last night was something else for my family, something nonetheless important. A little entertainment. A little bit of grace.

Soon after I was diagnosed with cancer, a friend who'd had his own harrowing year emailed me a few words of wisdom. "I've discovered the answer to 'Why?' is 'Because,' and the answer to 'Why me?' is 'Why not you?'" he wrote. "So let people do astonishingly generous things for you. Know why? Because why not you?" As my beloved says, "Every time I have a worst-case scenario, I have to do a wildest dream come true as well. Every negative projection deserves a positive one. It's only fair." I like those odds.

Life is random and surprising. But it's wonderful to remember that it's often not just in the "oh crap, assume the crash-position" way. Sometimes you find a quarter on the sidewalk. Sometimes a friend calls right when you're thinking of her. And sometimes, a fairy godmother in the form of a New Jersey security guard plucks you from the back row to backstage. Why? Why not? For no better reason than just because it's your lucky night.