Why "The Help's" critics are all wrong

So a white woman wrote about the black experience? That's what fiction's all about 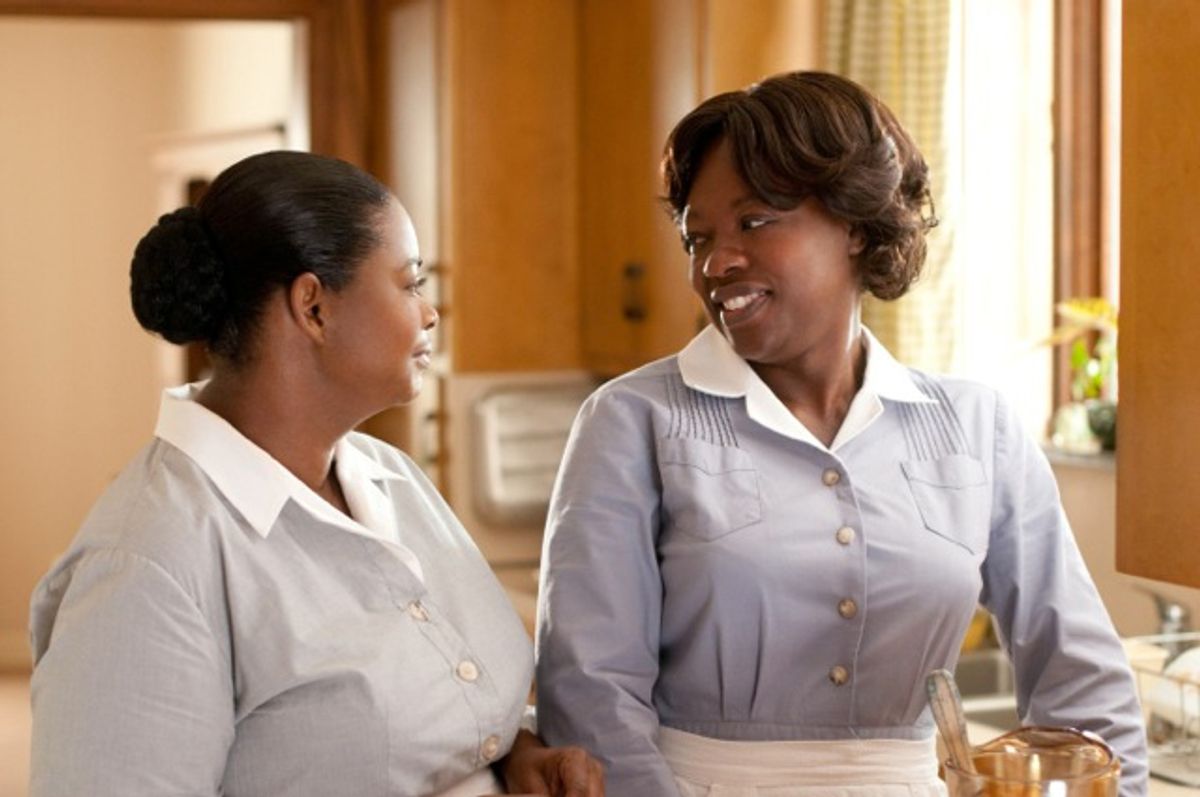 Octavia Spencer and Viola Davis in "The Help."
--

"This isn't about me." That's what eager, well-intentioned and lily-white aspiring writer Skeeter tells the nervous African-American maid Minny in "The Help." It's her pitch to try to get Minny to open up about her experiences as a domestic, and her feelings on the roiling racism of Jackson, Miss., in the early 1960s. But it's also one of the most telling moments of what's shaping up to be one of the most controversial and surprisingly divisive movies of the year. Because novelist Kathryn Stockett wrote a book that wasn't just about her. And that has a made a lot of people very uncomfortable.

Amid the Oscar buzz and accolades for the fine performances of "The Help's" A-list cast, the film has generated criticism for its supposed whitewashing of one of the most contentious, painful periods in recent American history. The Association of Black Women Historians recently issued a statement on the best-selling book and film, sating that, among other things, "'The Help' is not a story about the millions of hard-working and dignified black women who labored in white homes to support their families and communities. Rather, it is the coming-of-age story of a white protagonist, who uses myths about the lives of black women to make sense of her own. The Association of Black Women Historians finds it unacceptable for either this book or this film to strip black women's lives of historical accuracy for the sake of entertainment."

The Boston Globe has criticized the film as "an all-American cop-out." Nelson George, writing in the New York Times, contrasted "The Help" with civil-rights documentaries and the "larger problem for anyone interested in the true social drama of the era." Likewise, in a meticulously thorough piece last week, my colleague Matt Zoller Seitz put the film in the context of Hollywood's historically lunkheaded, white-guilt appeasement genre. But should a history of badly done movies keep others from taking a crack at it?

When a story becomes a hit, it's because it's struck a particular chord. And one of the more absurd aspects of the criticism of "The Help" is irritation that it's a success in the first place. "Why this?" its detractors wail. "Why this, when there are other books, written by actual black women, to be read?" True, and maybe readers who enjoyed "The Help" will now seek them out. The success of one book or movie does not come at the expense of another. Stockett could have chosen to write the book exclusively in the voice of the idealistic -- and pale-hued -- Skeeter. But she didn't. That's Stockett's choice to make as the author. Similarly, much of the criticism of the movie and book also stems from its restrained depiction of the era's sexual harassment and racial violence. Yet it seems not so much a conspicuous oversight as a narrative choice -- "The Help" is a story that takes place largely in the genteel domestic sphere, and studies the ways that females of the era both dished out and endured racism. That's the story. And guess what? Novels don't get to be crowd-sourced. You don't get a vote in Stockett's plot.

I'd wager Kathryn Stockett never set out to create the definitive tome on the African-American experience. I've never read an interview with her in which she claimed to be representing "millions of hard-working and dignified black women." Her Minny and Aibileen are no more everywomen than her blithely racist white girls Hilly and Celia are.

As a reader or viewer, you might not like "The Help." It is a formulaic Hollywood feel-bad and then feel-good work, one in which beautifully bathed-in-sunlight characters say Very Important Things while music swells. But there's a difference between being critical of the work and being squeamish about someone's right to create it. It's clear that the main problem a lot of people have with "The Help" is that the story was written by a white lady. And that's a really bad road of reasoning to go down, people.

The job of fiction is to inhabit someone else. Argue, if you will, that Stockett didn't do a credible job -- but don't bother taking offense that she ambitiously took on the challenge in the first place. Don't assume that only the Toni Morrisons or Alice Walkers or Sapphires of the world have permission to write in the voice of African-American women. Or, for that matter, that members of any group should only write about their own.

Flaubert once famously said, "Madame Bovary, c'est moi." Who's to say that a man can't write of the tragic frustrations of a housewife? That a Russian can't channel a Continental pederast? A Japanese man can't write about postwar English servants? Or a white woman can't write about African-American maids? That's fiction in a nutshell for you. Otherwise, it's called memoir.

One of the most repeated images of "The Help" is a simple tableaux of two women of different backgrounds and colors, just talking. Asking questions. Trying to understand. And that, to me, is the heart of the film. It's not about the big news stories of the early civil-rights era -- it's a story about having difficult and necessary exchanges about race. Skeeter may be a noble budding crusader, but her appeal is in her realization that she wants to understand. I'd like to believe that the fact that "The Help" has touched off such intense debate, such vehement criticism, is a good thing, because it says that we're doing just that still. As Owen Gleiberman astutely wrote this week on Entertainment Weekly's website, "It shows us the form that activism could take among women who weren't activists."

On Monday afternoon in Times Square, the audience for "The Help" was surprisingly packed and unmistakably diverse. For a few hours, a variety of young people and older matinee goers, men and women, black and white, sat down together and watched a movie about what happens when black and white people sit down together. Then, as Viola Davis walked down a Jackson street, the lights came up. And for every member of the audience, an opportunity for conversation began.