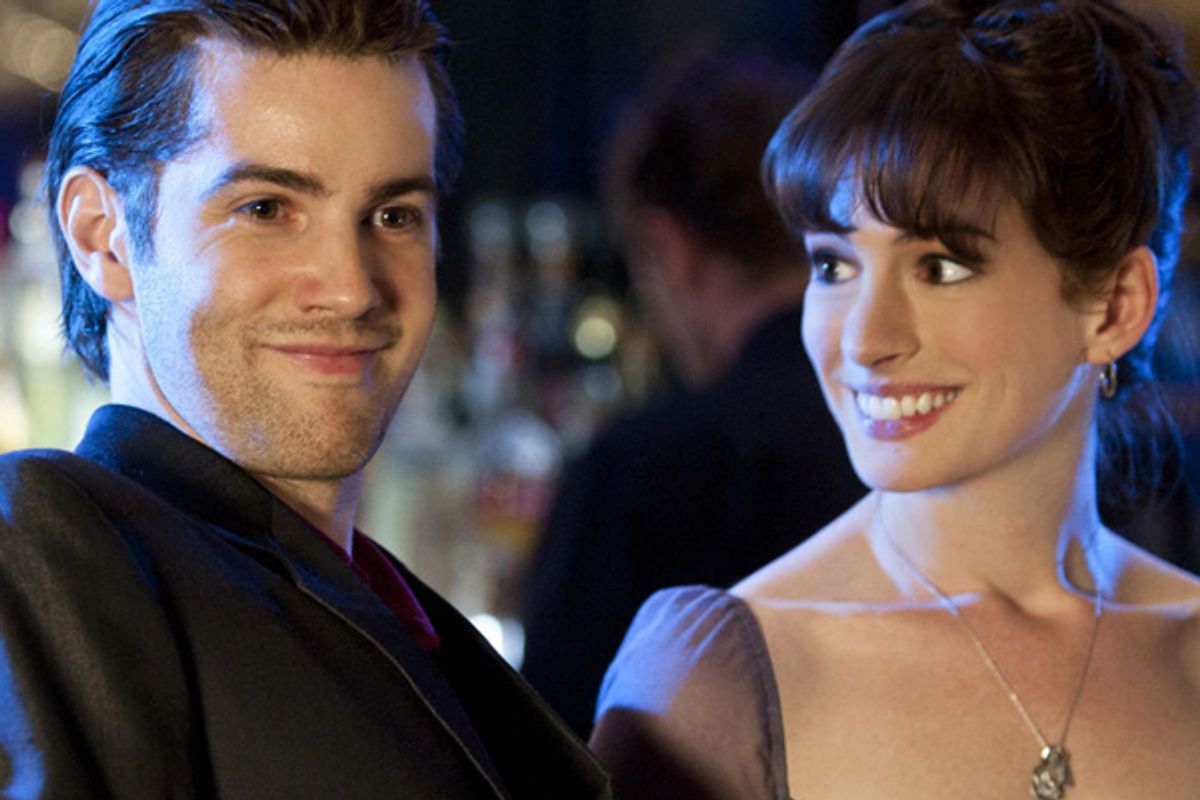 Jim Sturgess and Anne Hathaway in "One Day."
--

Most of the time, with failed Hollywood movies, you've got a familiar mix of ingredients, way too many cooks in the kitchen and an utterly predictable result. You end up with a forgettable curiosity like, say, "Friends With Benefits," the Mila Kunis-Justin Timberlake rom-com that came and went earlier this summer. You couldn't call it awful -- it has attractive stars and a screenplay that provides them with some amusing lines and at least the hypothetical potential to add a new twist to an old formula. But like most such products of the entertainment conglomerates, it was essentially constructed by a massive interlocking army of producers and agents and publicists and marketers; any shred of personality the film might once have possessed was systematically ironed out of it in a quest for rib-tickling, inoffensive mediocrity.

"One Day," a tear-stained, Oscar-aimed relationship dramedy starring Anne Hathaway and Jim Sturgess, which was adapted by British writer David Nicholls from his own bestselling novel, is a more interesting, and far more painful, case from the Indiewood borderlands. You could definitely call it awful, and I'm about to do so, repeatedly and effusively. In fact, "One Day" is an appallingly bad movie made by talented people who could and should have done much better, but somehow all drove off the cliff together. Maybe it's a test case in the importance of source material and screenplay, because both English pretty boy Sturgess and budding American superstar Hathaway are charismatic actors whom I've liked a great deal in other roles. As for Danish director Lone Scherfig, she definitely belongs to the lightweight, Hollywood-friendly end of the Euro-spectrum, but I thought she did a terrific job with her Oscar-nominated "An Education," which was made with craft, economy and affection.

Whatever the chemical explanation may be, the combination of ingredients in "One Day" is not just disappointing but pretty much poisonous. The two leads are gruesomely miscast, mug shamelessly and seem awkward around each other to the point of actual repulsion. (It may be unseemly to complain about Hathaway's wobbly accent, given how often we put up with that from British actors -- her character's supposed to be Scottish and middle-class, which isn't easy to get right -- but it doesn't help.) I haven't read Nicholls' book and don't plan to, unless Boris Badunov offers me the choice of doing so or being strapped to a lit keg of Acme dynamite. But his gimmicky concept -- tracking the central couple's journey through adulthood by documenting their lives just one day a year, from their first collegiate meeting on July 15, 1989, through every July 15 thereafter -- is a supremely literary device that's poorly suited to cinema.

Every time you think a story may be emerging in "One Day," it's gone. OK, Hathaway's bespectacled, "alternative," gamine-but-serious Emma is working in a Mexican restaurant while Sturgess' intolerably self-involved upper-class toff, Dexter, travels the world in bad chinos and a Flock of Seagulls haircut, doing French girls. Next! OK, let's jump a year ahead to find Emma -- well, she's still working at the Mexican restaurant and dating a hideous, troll-like fellow who takes her to see "Army of Darkness," while Dexter is doing lots of coke and hosting some kind of TV show for teens in a fake Cockney accent. It's like some obnoxious MTV cultural history of the 1990s, allegedly enlivened by stereotyped contrasting characters we know only from hackneyed little snatches, and who we can only hope will get blown up by the IRA. Sorry! I guess that's crossing the line, even when we're talking about massively irritating fictional characters, and given my last name it might get taken the wrong way. I'd have been equally happy to see them get pounded into a pulp by National Front skinheads. Is that better?

I'm a sucker for romantic melodrama and tales of doomed love, the soapier the better. But I actively did not want Emma and Dexter to outlive their relationships with supporting characters still more clichéd and unsatisfactory than themselves, grow up into full-fledged human beings and realize they were made for each other. (Actually, I'll spare a kind word for Rafe Spall as the aforementioned troll-like boyfriend; he's the only person in the film who seems identifiably human.) Each is insufferable enough on their own, thank you, and as Nicholls' story lurches laboriously from one July 15 to the next, it becomes less and less plausible that they would remain friends so long, whatever unfulfilled hangover lingers from their semi-comic collegiate non-coupling. I kept watching "One Day" out of pure curiosity: Could Scherfig and her actors possibly make Emma and Dexter suffer enough that I'd feel something for them, beyond a mixture of hatred and befuddlement? By the end, simply by ladling out thick, soupy dollops of tragic coincidence and misty romantic nostalgia, this movie may yank the desired emotional response out of you, after the Pavlovian fashion of an over-long commercial for a digital camera or an investment firm. But "One Day" isn't nearly worth two precious hours.