Pick of the week: A killer clown takes on fascism 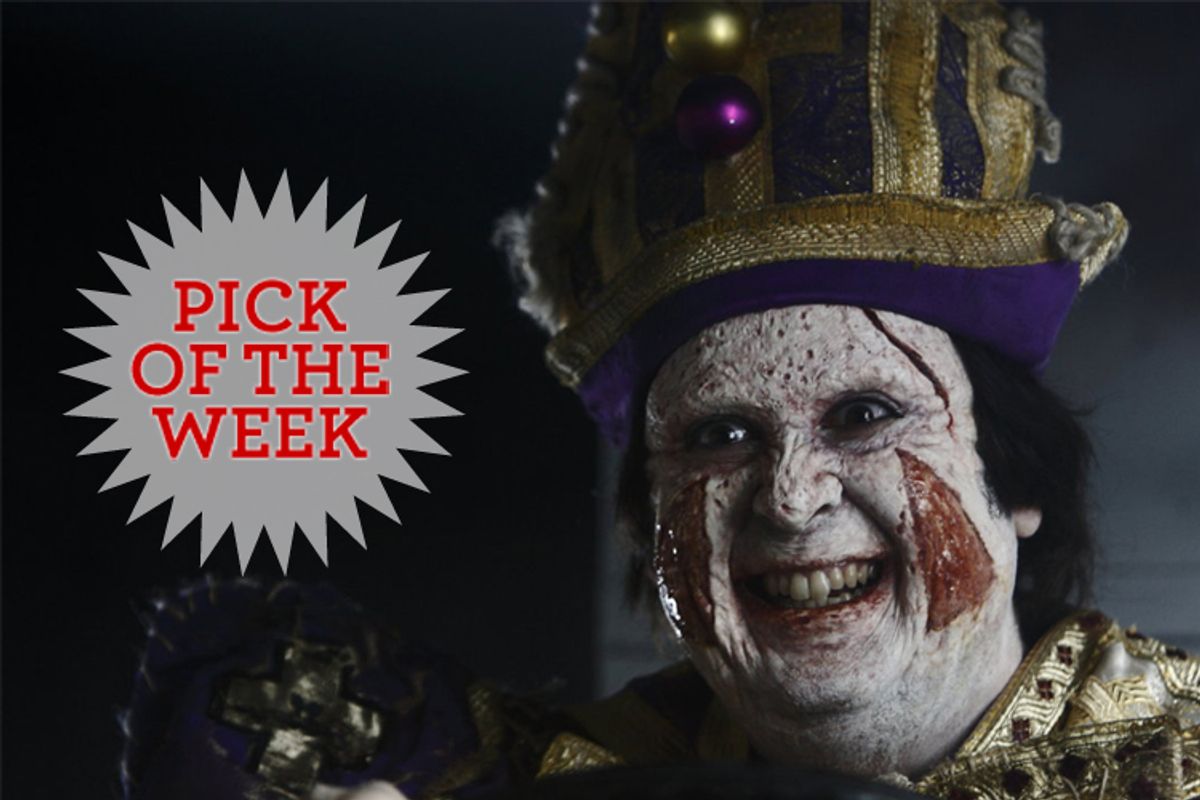 Maybe you feel like you've seen too many ultra-violent Spanish Civil War-related vengeful-clown horror-romance-comedies, and you're just bored to death with that whole genre. It's also possible, I suppose, that a movie as deranged and grotesque and spectacular as Álex de la Iglesia's near-masterpiece "The Last Circus," an overcooked allegory that's been dialed to 11 in all directions, simply doesn't appeal to you. But if you like your baroque sex and violence with a side dish of heavy-duty symbolism, and if the idea of an unholy collaboration between, say, Guillermo del Toro, Federico Fellini and William Castle appeals to you, then put "The Last Circus" on your must-see list right now.

De la Iglesia is a Spanish director of unhinged genre mashups whose movies are generally too trashy for the film-festival crowd and too European in sensibility for most Anglophone genre-movie fans. I keep thinking that he has to attract a global following at some point, in roughly the same way Japanese director Takashi Miike has and for roughly the same reasons. Amid the recent explosion of genre cinema in Europe, de la Iglesia stands out for his improbable fusion of old-school art film -- I've already mentioned Fellini, but "The Last Circus" also bears the imprint of Bergman's circus film, "Sawdust and Tinsel" -- and grade-Z American splatter flicks. He had a minor art-house moment with the crime comedy "El Crimen Perfecto" in 2004 (the original Spanish title is funnier: "Crimen ferpecto"), and then made a sub-mediocre foray into English-language filmmaking with "The Oxford Murders," starring Elijah Wood and John Hurt, in 2008. If you've seen earlier de la Iglesia films like "Day of the Beast," "La Comunidad" or "800 Bullets," you'll be better prepared for "The Last Circus," if that's possible.

I don't even know whether to tell you that "The Last Circus" is good or bad; it belongs to the Nicolas Roeg or Ken Russell 1970s tradition of way-too-muchness that seeks to tear down such distinctions and stomp all over them. I will say that it's a mightily impressive production (with a reported budget of 7 million euros, pretty high by Spanish standards), grittily staged and handsomely photographed and full of exciting action scenes and effects, and that de la Iglesia is striving for something really big, like an exploitation flick that's also a historical reckoning with the Spanish conscience. Whether you actually want to see a movie where a deranged circus clown clad in bishop's robes disfigures his own face with a hot iron -- that part is up to you.

"The Last Circus" begins in the late 1930s, with a splatterific battle sequence in which a ragtag militia band that features a circus clown named Andrés (Enrique Villén) takes out an entire platoon of Francisco Franco's fascist soldiers. Andrés will die gruesomely in a prison camp, but not before counseling his young son Javier to seek vengeance. Then we leap forward to the bell-bottomed early 1970s, with the Franco dictatorship in its last, decadent years and Javier (Carlos Areces) as a pudgy, 40ish loser who has finally decided to follow his father into the circus. But Javier can't play the happy clown who makes children laugh, the way his father did; he's the sad clown, the permanent victim and butt of all the jokes. (I hope de la Iglesia approved the English title, but it lacks the resonance of the original, "Balada triste de trompeta" or "Sad Trumpet Ballad," which refers to a Franco-era hit song sung by a clown in a movie.)

Javier signs up as a sidekick to the vicious, drunken Sergio (Antonio de la Torre), a clown and impresario who runs a low-rent Madrid circus that's sliding toward bankruptcy. Sergio is married to the beautiful acrobat Natalia (Carolina Bang), whom Javier first sees descending from the sky like a heavily mascaraed vision of heaven. But if Natalia is an angel, she's an intensely neurotic one, unable to tear herself away from the abusive man she loves but more than willing to toy with the affections of the inexperienced Javier, who is obviously puppy-dog smitten. We know where this is heading, or at least we think we do; de la Iglesia's method is to take an archetypal situation, like this impossible romantic triangle, and then drive it off the cliff into utter insanity. (I haven't yet mentioned Charlie Chaplin's "The Circus," another obvious influence.)

So, yes, there will be a series of violent confrontations between Javier, the noble-but-ineffectual Sad Clown, and Sergio, the violent-and-evil Happy Clown. The outcome of their battle over the woman they love is entirely predictable. But that still doesn't account for the scene in which Sergio's ruined face is stitched together by an unlicensed veterinarian so that he looks like a half made-up extra from "Dawn of the Dead," or the section of the story when Javier lives naked in the forest on raw deer meat, at least until he is captured by the very same fascist officer who killed his father many years earlier. That all precedes the scenes when Javier personally bites the doddering Generalissimo Franco on the hand (while serving as a nude human bird-dog), maims himself with acid and the aforementioned hot iron, and goes on a killing spree through Madrid with automatic weapons and an ice cream truck. Or the final collision between Javier, Sergio, Natalia and a phalanx of fascist troops, staged atop the 500-foot cross built by Franco in the Valley of the Fallen as a memorial to the Civil War dead (or at least the ones he approved of). Whew! There will be a quiz, or rather the whole movie is a quiz with just one question: Are you nuts enough to enjoy this sort of thing?

This film has provoked extensive debate in Spain and among de la Iglesia's fans about whether it's a career-crowning masterwork (as it's clearly striving to be) or a pretentious mess that rips off Hitchcock, Tarantino and Alejandro Jodorowsky, along with all the other filmmakers I've already mentioned and others I simply haven't gotten to (Javier has a little bit of Travis Bickle in him, a little of Rupert Pupkin and maybe a little of Mark David Chapman). I feel pulled in both directions. Every frame of this film is invested with passion -- passion for Spain, passion for life, passion for cinema -- and amid the jaded, knowing cleverness of most moviemaking that makes it stand out. After half an hour I'd have told you that "The Last Circus" was one of the best movies of the year, and after almost two hours of de la Iglesia's sensory onslaught, I was ready for it to stop. For good or for ill, you've never seen anything quite like this, and probably never will again.