How to preserve the sweet taste of summer

You won't find these berries at the store, but their delicious flavor makes for a perfect simple syrup 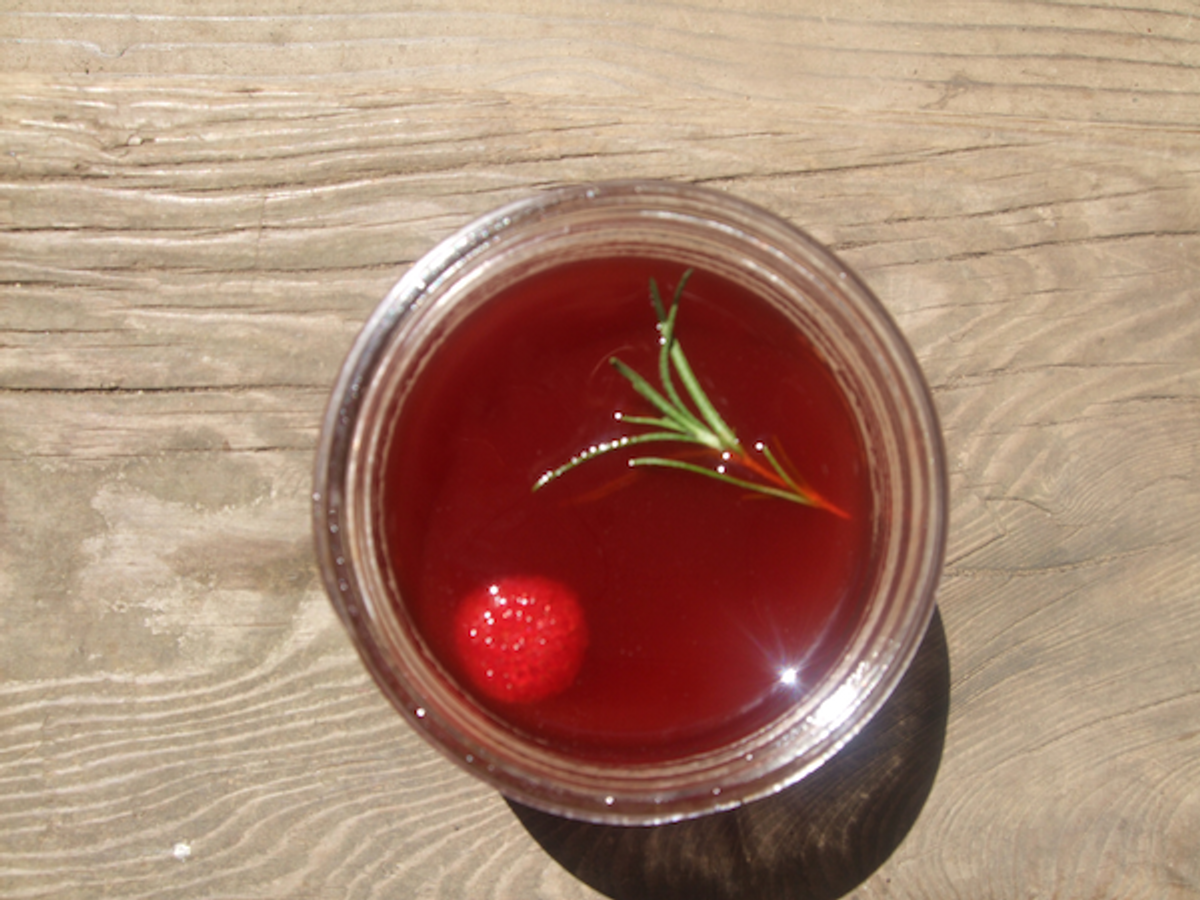 The red is sumptuous, like a queen's boudoir or a bordello. The texture is soft as velvet ribbon. The plant itself -- deep red berries, delicate white flowers and broad fuzzy leaves, is pretty like the illustration in a children's book or the backdrop to a Strawberry Shortcake cartoon.

I'm happy thimbleberry bushes are so pretty, because they grow around my house in drifts, crowding my hydrangeas, obscuring our spindly roses, and popping up through the tops of the mammoth rhododendrons. In the spring, I put up a fight. I tore up root systems and amassed a brush pile the size of a car. My glory was short lived. Like their evil cousin, the thorny salmonberry, thimbleberry bushes spread from rhizomes deep underground. In the blink of an eye the bushes had returned, full-size and already sporting white flowers.

"We'll have to go after those things again," Rich said. He spoke too late. By this time in our lives, foraging was taking up a sizable chunk of my mind. When I looked at the white blossoms I saw food. "Let's wait till after they fruit," I said. Rich (the Bert to my Ernie, the Felix to my Oscar) sighed, no doubt mourning another battle lost to the combined creeping chaos of his wife and the Oregon woods.

Thimbleberries are not as prolific as blackberries -- typically, each plant will yield only a few clusters of berries. But if you take the effort to pick a cup, you'll find your time well spent. The flavor is tart and sweet with an interesting undertone -- a dry bite, reminiscent of good white wine.

You won't find thimbleberries at the store for three reasons: The berries are soft and do not transport well, seeds are abundant, and the texture takes some getting used to. Thimbleberries taste fantastic, but settling your teeth through the seeds causes a strange sensation, something akin to biting a piece of felt. It's not unpleasant, but it's definitely unusual.

In the old days, in the villages that dotted the Northern Pacific coast, the native people developed ways to improve the texture and longevity of thimbleberries. The Nuu-chah-nulth dried the berries. The Kwakwaka'wakw harvested the berries early and ripened the fruit in storage before drying. The Nuxalk boiled the seedy berries in cedar boxes until they were a jamlike consistency and then spread the berry mash on drying frames. They wrapped the finished cakes in thimbleberry leaves and stored the packets in cedar boxes. All three methods were born from the wish to preserve summer's sweetness. Preserving berries allowed the tribes to mitigate the ungodly drear of a Northwestern winter with bright reminders of August.

Having survived one such winter recently, I certainly understand this desire. So far, thimbleberry rosemary simple syrup is my best version of summer in a bottle. My recipe requires only one cup of thimbleberries (which is nice, because it's hard to pick more than a cup at a time). Straining the berries into syrup eliminates the weird texture and the overabundance of seeds. You are left with the flavor -- rich and red and divine.

I make my thimbleberry simple syrup with honey from my friend Carl's bees. I often replace sugar with honey to sustain my delusion of a healthy diet, but in this case it's an apt substitution: Honey works well with wild flavors. Sprigs of rosemary (an idea I stole from Robin Leventhal) add complexity and prevent cloying; a dash of lime juice makes the flavor pop.

I started experimenting only a week ago, and I've already found plenty of uses for this syrup. Pour it over whole yogurt, and you've got a satisfying and reasonably healthy dessert. Thimbleberry rosemary syrup makes an excellent marinade for pork chops, a good Italian soda, and an even better cocktail (try two tablespoons of syrup with six ounces of soda water and two ounces of vodka). Or you can just grab a spoon ...

Rich has proclaimed the syrup a success, but I'm sure he won't be truly pleased until the last berry had been processed and he can take to the thickets with his machete and shovel.