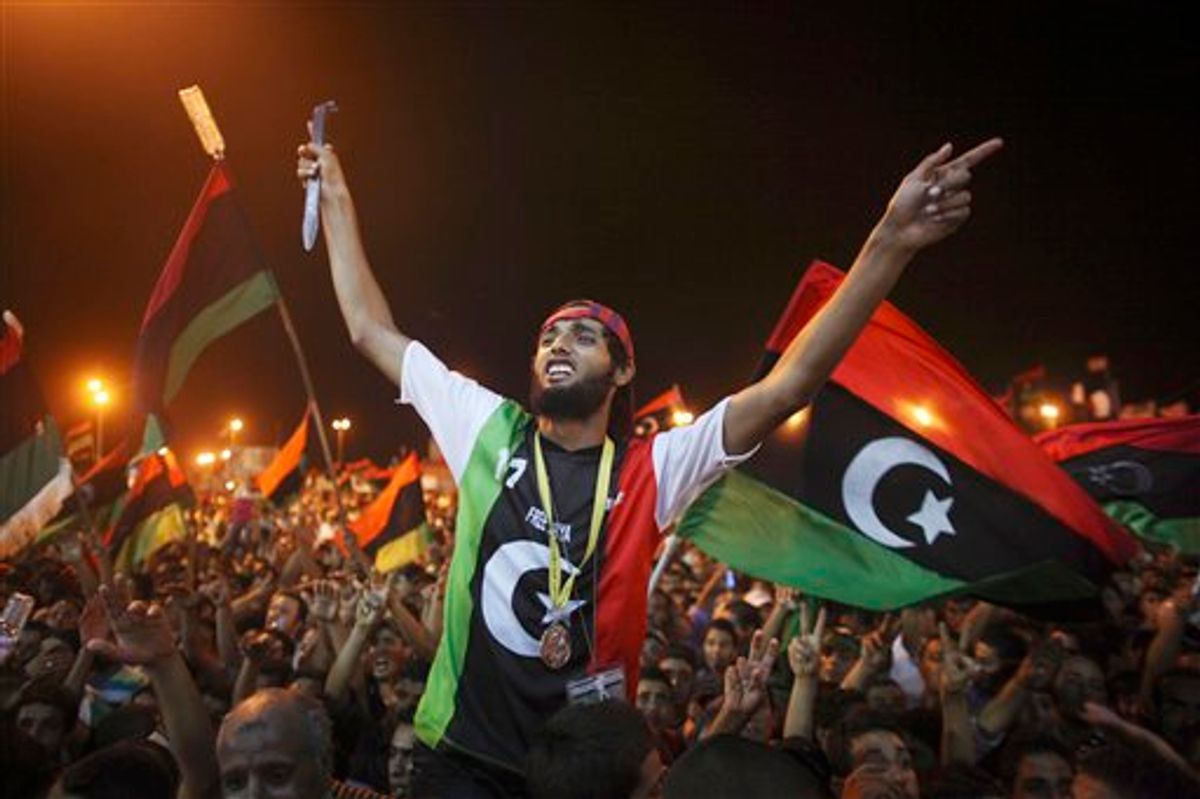 People celebrate the capture in Tripoli of Moammar Gadhafi's son and one-time heir apparent, Seif al-Islam, at the rebel-held town of Benghazi, Libya, early Monday, Aug. 22, 2011. Libyan rebels raced into Tripoli in a lightning advance Sunday that met little resistance as Moammar Gadhafi's defenders melted away and his 40-year rule appeared to rapidly crumble. The euphoric fighters celebrated with residents of the capital in the city's main square, the symbolic heart of the regime. (AP Photo/Alexandre Meneghini) (AP)
--

In April, 2003, American troops entered Baghdad and Saddam Hussein was forced to flee; six months later, the dictator was captured ("caught like a rat in a hole," giddy American media outlets celebrated) and eventually hanged.  Each of those incidents caused massive numbers of Iraqis who had suffered under his decades-long rule to celebrate, and justifiably so: Saddam really was a monster who had brutally oppressed millions.  But what was not justifiable was how those emotions were exploited by American war advocates to delegitimize domestic objections to the war.  Even though opposition to the war had absolutely nothing to do with doubt about whether Saddam could be vanquished by the U.S. military -- of course he could and would be -- the emotions surrounding his defeat were seized upon by Iraq War supporters to boastfully claim full-scale vindication (here's one of my all-time favorites from that intellectually corrupt genre).

So extreme was this manipulative way of arguing that then-presidential-candidate Howard Dean was mauled by people in both parties when he dared to raise questions about whether Saddam's capture -- being hailed in bipartisan political and media circles as a Great American Achievement -- would actually make things better.  Dean's obvious point was that Saddam's demise told us very little about the key questions surrounding the war: how many civilians had died and would die in the future?  What would be required to stabilize Iraq?  How much more fighting would be unleashed?  What precedents did the attack set?  What regime would replace Saddam and what type of rule would it impose, and to whom would its leaders be loyal?  That a dictatorial monster had been vanquished told us nothing about any of those key questions -- the ones in which war opposition had been grounded -- yet war proponents, given pervasive hatred of Saddam, dared anyone to question the war in the wake of those emotional events and risk appearing to oppose Saddam's defeat.  That tactic succeeded in turning war criticism in the immediate aftermath of those events into a taboo (the same thing was done in the wake of Mullah Omar's expulsion from Afghanistan to those arguing that the war would result in a "quagmire").

As I've emphasized from the very first time I wrote about a possible war in Libya, there are real and important differences between the attack on Iraq and NATO's war in Libya, ones that make the former unjustifiable in ways the latter is not (beginning with at least some form of U.N. approval).  But what they do have in common -- what virtually all wars have in common -- is the rhetorical manipulation used to justify them and demonize critics.  Just as Iraq War opponents were accused of being "objectively pro-Saddam" and harboring indifference to The Iraqi People, so, too, were opponents of the Libya War repeatedly accused of being on Gadaffi's side (courtesy of Hillary Clinton, an advocate of both wars) and/or exuding indifference to the plight of Libyans.  And now, in the wake of the apparent demise of the Gadaffi regime, we see all sorts of efforts, mostly from Democratic partisans, to exploit the emotions from Gadaffi's fall to shame those who questioned the war, illustrated by this question last night from ThinkProgress, an organization whose work I generally respect:

The towering irrationality of this taunt is manifest.  Of course the U.S. participation in that war is still illegal.  It's illegal because it was waged for months not merely without Congressional approval, but even in the face of a Congressional vote against its authorization.  That NATO succeeded in defeating the Mighty Libyan Army does not have the slightest effect on that question, just as Saddam's capture told us nothing about the legality or wisdom of that war.  What comments like this one are designed to accomplish is to exploit and manipulate the emotions surrounding Gaddafi's fall to shame and demonize war critics and dare them to question the War President now in light of his glorious triumph.

Of course, ThinkProgress could have just as rationally directed its question to President Obama's own Attorney General, Eric Holder, and his Office of Legal Counsel Chief, Caroline Krass, and his DOD General Counsel, Jeh Johnsen, all of whom argued that the war was illegal on the same grounds as Boehner did.  Or they could have directed their comment to the numerous House Democrats who vehemently protested the war's illegality, and to the 60% of House Democrats who voted to de-fund it.  Or they could have even directed it to ThinkProgress' own Matt Yglesias, who repeatedly expressed doubts about both the legality and wisdom of the Libya war, and last night wrote:

Let’s wish the best of luck to the people of Libya. Part of the problem with this intervention has always been that the fall of a dictator seems to me just as likely to lead to a bloody civil war or a new dictatorship as the emergence of a humane and stable regime. The effort to build a better future really only starts today.

Those are among the key questions that remain entirely unanswered.  No decent human being would possibly harbor any sympathy for Gadaffi, just as none harbored any for Saddam.  It's impossible not to be moved by the celebration of Libyans over the demise of (for some at least) their hated dictator, just as was the case for the happiness of Kurds and Shiites over Saddam's.  And I've said many times before, there are undoubtedly many Libya war supporters motivated by the magnanimous (though misguided) desire to use the war to prevent mass killings (just as some Iraq War supporters genuinely wanted to liberate Iraqis).

But the real toll of this war (including the number of civilian deaths that have occurred and will occur) is still almost entirely unknown, and none of the arguments against the war (least of all the legal ones) are remotely resolved by yesterday's events.  Shamelessly exploiting hatred of the latest Evil Villain to irrationally shield all sorts of policies from critical scrutiny -- the everything-is-justified-if-we-get-a-Bad-Guy mentality -- is one of the most common and destructive staples of American political discourse, and it's no better when done here.

On April 10, three weeks into the war which he portrayed as mission accomplished, [Joe] Scarborough delivered a wacky commentary demanding that "disgraced" war skeptics like Jimmy Carter and Dennis Kucinich admit that “their wartime predictions were arrogant . . . misguided . . . and dead wrong.” This on a show in which he spoke of Iraq possessing WMD.  Scarborough was gleeful that antiwar "elitists" like Tim Robbins, Susan Sarandon, and Janeane Garofalo were facing cancellations and boycotts. [Michael] Savage joined the conversation to say that "Hollywood idiots" are “absolutely committing sedition and treason." Scarborough responded, "These leftist stooges for anti-American causes are always given a free pass. Isn't it time to make them stand up and be counted for their views?"