Yes, a vineyard's gimmick capitalizes on a tragedy -- but also raises lots of money for the memorial foundation 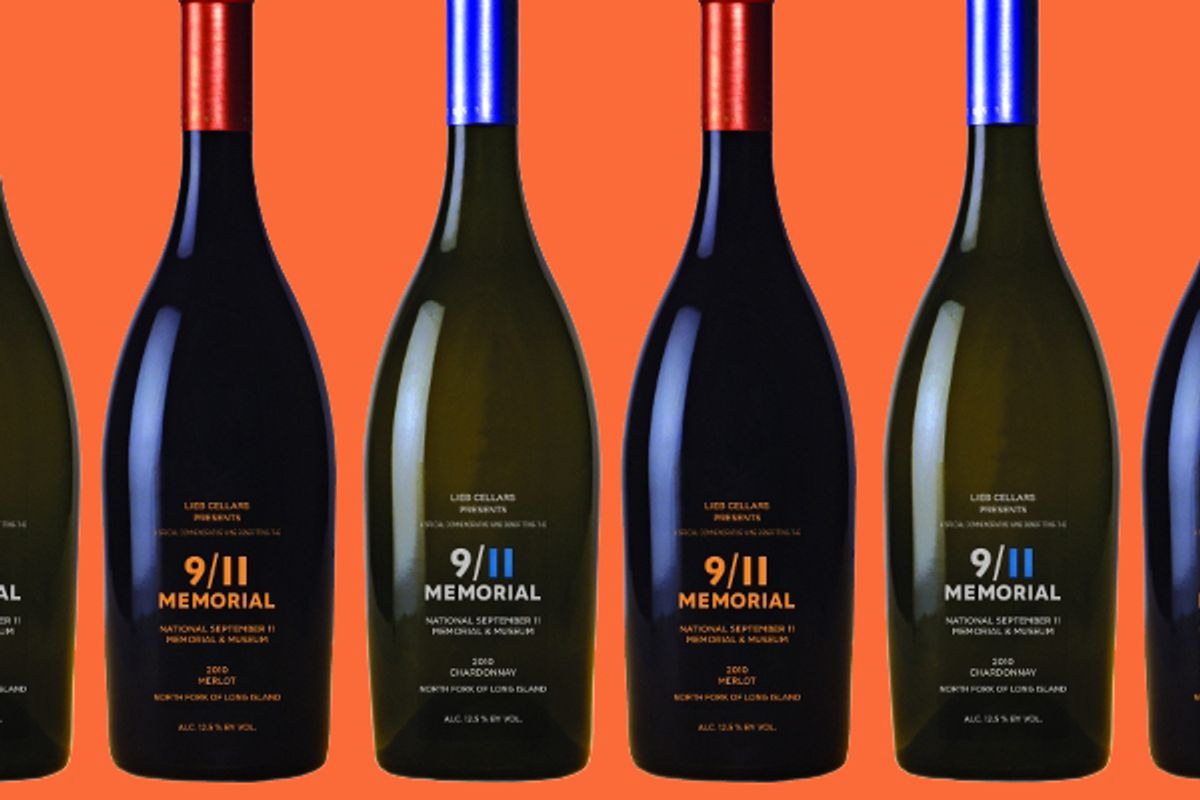 In the days after 9/11, seemingly faster than the New York City police started letting people back downtown, a cottage industry of memorabilia sprang up on the streets. The air, still thick with dust, was thick with consumerism as well, as vendors began hawking flags and "United We Stand" T-shirts. And in the ensuing decade, there have been 9/11 coins, 9/11 belt buckles featuring burning towers and even art projects involving the material used for dental impressions and steel from the collapsed towers.

Now, as we approach the 10th anniversary of the attacks, there's a 9/11 wine. The Long Island winery Lieb Family Cellars is issuing a "commemorative" merlot and chardonnay released "to benefit the National 9/11 Memorial and Museum." Garçon, what would you recommend as a pairing for national tragedy?

It's not as if the whole thing is just a crass attempt to make a buck off a tragedy. The wines are being issued with the approval of the 9/11 Memorial Foundation, "6% to 10% of the sales" of each bottle, sold at the inevitable price of $19.11 a pop (if you buy directly from the winery), will go back toward the memorial. Gary Madden, the winery's general manager, explained to KTLA-TV this week that the wines are "just another tool for the memorial foundation to use as they fundraise," and claimed that they've drummed up $8,000 for the foundation in under a month. In 2004, they introduced a cheaper bottle, the $9.11 September Mission merlot. They donate 9.11 cents for every bottle sold to the September Mission, and estimate that they've raised $25,000 off that wine already.

But not everyone thinks a tragedy-themed beverage is in good taste. On Sunday, Anthony Bourdain summed up his response on Twitter, noting, "What kind of piece of shit would create such a product?" And speaking to the New York Daily News, Ben Glascoe, whose firefighter son died on 9/11, called the effort "distasteful."

Yet the Memorial Foundation itself is fine with the wine. In fact, it was board member Monica Iken who first approached Lieb Cellars about the collaboration. And the winery, in addition to bottling up 9/11-themed beverages, regularly offers other "great wines for good causes," including a Syrah that benefits the Animal Medical Center. The question about the 9/11 wines, though, is, why this cause? And why is it so unsettling to so many people?

Wine is generally associated with conviviality -- and fish or meat. But memorials don't run on love and grief and memory. They need money, even the kind that dribbles in incrementally from Long Island oenophiles. Likewise, there's something in human nature that draws us toward places of tragedy, and leaves us yearning to bring a little bit of the experience home. We want to say, "I still care," and can do so however we see fit. That's why places like Buchenwald have gift shops. Yet those same places naturally inspire horror and sorrow. The line between tacky opportunism and tasteful remembrance is an ever-shifting one. Personally, I'd sooner drink a Coors Light than anything with that date on the bottle. But however uneasy or odd the idea of uncorking a 9/11 wine may be to many of us, it wouldn't happen if there weren't a demand. And it's not as if I've given eight grand to support the memorial lately. "People have different ways of grieving and giving back," Madden told KTLA. And though it seems hard to understand, some prefer to remember and give back with something you can serve with crackers.